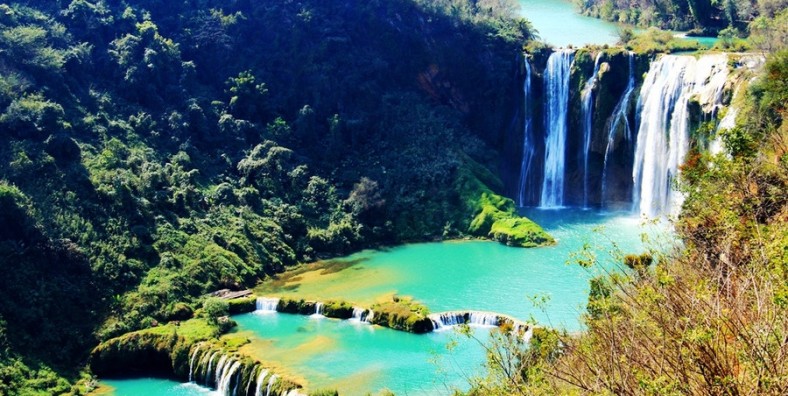 Jiulong Waterfall is the most famous waterfall in Jiulong River, also called ‘Dadieshui’ by local Buyi people. The cascades are scattered is on a two-kilometer-long section of the river. It is the most peculiar part of the river course. Thousands of years’ scouring and sedimentation have given birth to the ten terraces of cascades which vary from each other in height and width.

The largest cascade, known as “No.1 Cascade of Jiulong,” is 56 meters high and 110 meters wide. During the wet season, the roar of the cascade can be heard from several kilometers away. Observed from below, it seems to be a cataract roaring down from heaven with the force of a bolt, shrouding everything around in mist. In winter and spring, the cascade turns into a silver chain hanging from the sky, throwing spray into the air. In sunny days, rainbows will rise above the cascade, presenting a grand view of colors.

The second cascade, known as “Lovers’ Cascade,” is 43 meters high and 39 meters wide. At the foot of the cascade is the deep and tranquil Jiaobu Pond. The rest of the cascades all possess their peculiar charms. Standing on the belvedere, one can take in the ten cascades at one sight. Bu He, vice-chairman of the National People’s Congress, wrote, “Jiulong Cascades has no match in its majesty in south China.” Every year, on the second day of the second month of the Chinese lunar calendar, young people of all nationalities will be dressed in their best and flock to celebrate the “Antiphonal-Style Singing Festival.” At the festival, they will dance their traditional dances and carry out many other activities of distinctive national characteristics. The best part of the festival for the young men and women is that they can get to know each other by singing antiphonal songs. 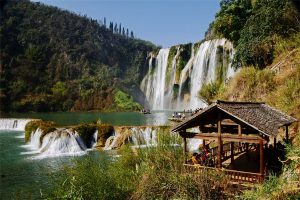 According to legend, long, long time ago, Luoping was a vast ocean. There are nine black dragons and one white dragon came from lotus pond of the Pearl River source to the sea. To contender for the sea, the black dragons and the white dragon did not want to give up the sea to others. And the competition is very intense. The white dragon was clever and monopolized the sea. However, the nine black dragons refused to accept as final. They burrowed holes under the sea, and the water of Luoping Sea was finally dry up and the white dragon had not place to go and died at the bank of the sea, and became the Baila Mountain. Later, eight of the black dragons excavated a river and irrigated the land of Luoping. Only the eldest black dragon always did bad things and caused the drought of Luoping. The king of the nether world knew that and ordered the god of wind, the god of rain, the god of Thunder, Thunder Goddess to renovate. The long river was chopped into 3 platforms. The highest platform is the Jiulong Waterfalls. 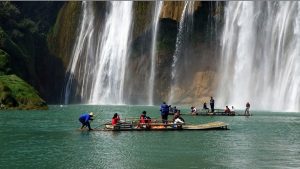