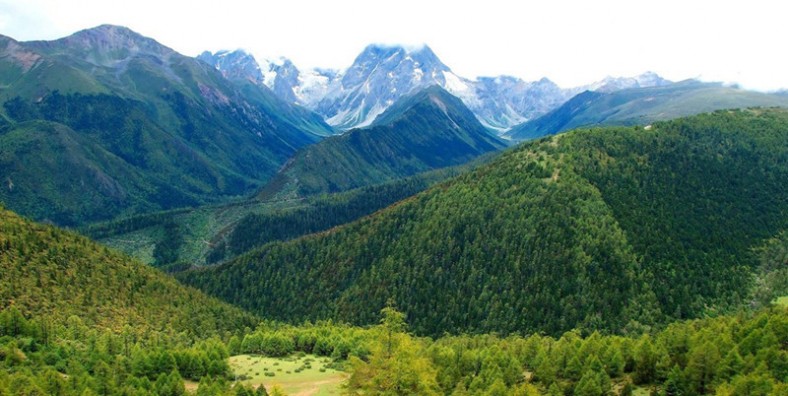 Baima Snow Mountain National Nature Reserve is located at the south-eastern part of Deqin County of Diqing Tibetan autonomous prefecture, northwest of Yunnan province. It's high in the north and low in the south, in the transitional zone between Qinghai-Tibet plateau and Yunnan-Guizhou plateau. It is the largest national nature reserve for protecting Yunnan golden monkey in China. The main objects of protection are alpine coniferous forest, mountain vertical vegetation landscape and Yunnan golden monkey.

Location: at the south-eastern part of Deqin County of Yunnan province

Why is Baima Snow Mountain So Special?

Covering an area of 190,000 hectares, Baima Snow Mountain National Nature Reserve has a complete vertical sight of virgin forest and rare plants and animals. There are 20 peaks of more than 5.000 meters above sea level, among which the highest is Baima Snow Mountain covered with snow all year round, with the altitude of 5,430 meters. It aims to protect the rare black snub-nosed monkeys, and natural views of the typical mountainous vertical zone (high mountains and canyons) of the Hengduan Mountain Range.

Where is Baima Snow Mountain – Location

Situated on the central part of the Hengduan Mountains, Baima Snow Mountain Nature Reserve stands on the slope of the section between the Baima Snow Mountain, the major peak in the north of the Yunling Ranges and Renzhi Snow Mountain. It is between Deqin County of the Diqing Tibetan Autonomous Prefecture and Markam County in the Tibet Autonomous Region. It’s high in the north and low in the south, in the transitional zone between Qinghai-Tibet plateau and Yunnan-Guizhou plateau.

Baima Snow Mountain Nature Reserve was established by the people’s government of Yunnan province in 1983, and was promoted to national level in 1988. Approved by the general office of the state council in 2000, the expanded reserve covers nine townships (towns) in Deqin and Weixi counties in the Tibetan autonomous prefecture of Diqing. It is recognized as a “Kingdom of Animals and Plants in a Cold Temperate Mountain” for its rich animal and plant resources. Overlooking the snow-capped main peak, it is just like a white horse running through the mountains, hence the name “white horse snow mountain”. 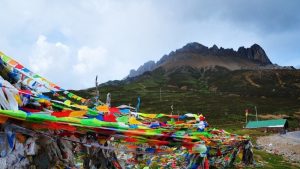 Plants:
The nature reserve has the distinct features of a three-dimensional appeal of climate and vegetation. Inside the nature reserve, there is a vast area of virgin forest including 13 species of national key protected wild plants such as Circaeaster agrestis and Pseudotsuga forrestii Craib. Highland oak birch, Yunnan pine, George’s fir, snow-white rhododendron, and vitchleaf sophora are the main plants in the reserve.

The dense mountain forest of Baima Snow Mountain provides the best place for wild animals to live, especially the wild species of usual mammals(47 species) and birds(45 species),  and some animals peculiar to the Hengduan Mountains. Such as lesser panda and green-tailed monal. As well as other rare wild animals at higher altitudes, such as snow leopard, white – eared pheasant, horse musk deer.etc. The most famous is the snub-nosed monkey or the Yunnan golden monkey, which lives in the sub-high mountain dark pine coniferous tree forests. 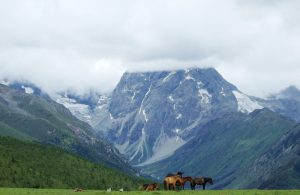 What to See at Baima Snow Mountain? 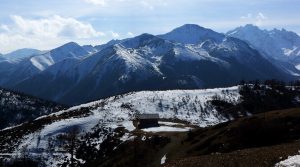 Baima Snow Mountain Nature Reserve has fantastic landscapes. Tourists can enjoy the landscape of the snow-covered area in the winter and the splendid sceneries of snow and ice melting, lofty peaks and flowing water in the summer. In the autumn, the snow mountain looks extremely high under the clear sky of autumn. As a “Kingdom of Animals and Plants in a Cold Temperate Mountain”, tourists can also have a chance to see the rare animals and plants.

The best seasons to enjoy the scenery of Baima Snow Mountain are summer and autumn from July to October. At this time, the ice along the highway are melted, and streams are babbling everywhere. The azalea like a blazing fire, birds singing in the forest, and monkeys playing all makes people fascinated. The mountain is closed from December to April because of the heavy snow and icy road.

Dongzhulin Monastery is the largest one of the three Gelu Sect monasteries in Deqin County and one of the religious cultural activity centers in Kangnan District. The housed treasures include gilded Maitreya , statue of White Drolma, Buddhas of Three Worlds, the ruler of the hell, Manjusri,  18 Arhats statues and Tangkar scroll paintings depicting Buddhist stories. There are also a great number of Buddhist stupas and religious instruments and props, being a Buddhist cultural treasure house for the pilgrims.

The Moon-shaped Bend of Jinsha River

Also called the Great Bend of Jinsha River, the bend is 15 km north of Benzilan Township of Deqin County. Jinsha River, the upper reach of the Yangtze River, is blocked by mountains on its way southward, and a hairpin turn has thus been formed as a natural wonder.

► Baima Snow Mountain Nature Reserve has the most beautiful mountain azalea forest in China, and the refreshing azalea is in full bloom in spring and summer.

► There are beautiful colorful trees in the forest area during autumn and winter which are worthing visiting.

► One can only enter the mountain area on foot after getting the approval by the protection bureau.

► Crossing over the Baima Snow Mountain Nature Reserve needs to climbing two passes(Lalaka Pass and Baima Pass). With high altitude and strong wind, it is necessary to keep warm and prevent altitude sickness.