Culture in Lincang is represented by tea culture and minority culture. Lincang city has a large number of ethnic minorities, with strong ethnic custom. Different ethnic groups create different festivals and culture. Cangyuan Wa Autonomous County is one of the only two Wa autonomous counties in China. In Lincang, take Wa people as the representative, the cultures they created have attracted a crowd of tourists.

During Shang dynasty, the place called “Baihuai” (ancestors of Wa, Bulang and Deang). In Qin and Western Han dynasties, today's Lincang belonged to Ailao kingdom. In the period of the republic of china, it set up Shunning county(顺宁县), Yunxian county(云县), Mianning county(缅宁县), Zhenkang county(镇康县), shuangjiang county(双江县) and Cangyuan and Gengma administrative bureau. On December 26, 2004, with the approval of the state council, Lincang prefecture was abolished and Lincang city, a prefecture-level city was established. On May 6, 2019, the state council agreed to build an innovation demonstration zone of the national sustainable development agenda in Lincang with the theme of innovation-driven development in less-developed border areas with multi-ethnic groups.

Buddhism is the main religion in Lincang, and there are some temples with a long history. The most representative one is Guangyun Buddhist Temple.

Guangyun Burmese Temple is one of the most influential temples that have influence on Theravada Buddhism among southwestern ethnic groups of Yunnan. It is a Theravada Buddhism building that located in the north of Mengdong town in Canyuan county, which is built in Qing dynasty. It is has been 170 years since Guanyuan Burmese Temple was built in 1828, its constructing style was influenced mostly by Han people; Meanwhile, it maintained the basic style of Theravada temples. Guangyun Burmese Temple was listed into the third batch of national key protection cultural relics by the State Council on January 13, 1988, due to its important position of history, territory, humanity cultures and religions.

Other Temples in Lincang

Lincang has a long history of tea culture, and there are quite a few tea plantations. Lincang is the origin center and core area of the world tea tree and tea culture, and is the earliest area to discover and use tea. The ancient tea tree king in Xiangzhuqing of Fengqing county, whose age can be traced back to King Wu of Zhou period, is called "the grandmother of tea" and "the king of tea tree". The Bingdao ancient tea garden in Bingdao village of Mengku Town, Shuangjiang county, was first recorded in the 21st year of Chenghua (1485) in the Ming dynasty, and is the birthplace of Yunnan large-leaf tea. The ancient tea garden of Baiying mountain in Yunxian county records the process of tea tree from wild to complete cultivation and domestication, and is known as "tea tree natural history museum". According to historical records, more than 3,000 years ago, the ancient Pu people in Lincang (ancestors of the present Bulang, Lahu, Deang and Wa ethnic minorities) were the first to cultivate make and use tea.

More about Tea Plantations in Lincang and Lincang Tea Factories

Except for Han, there are other 23 ethnic groups in Lincang. Among them, 11 ethnic groups, including Yi, Wa, Dai, Lahu, Bulang, Lisu, Hui, Miao, Deang, Bai and Jingpo, live in Lincang for generations. Lincang is the hometown of Wa in the world, is one of the birthplaces of Wa culture. Their traditional festivals are embodied in the local lifestyle.

According to the list of traditional Chinese villages, there are many traditional ethnic villages in Lincang, mainly distributed in Cangyuan county, Fengqing county Yunxian County and Linxiang District. Here below are several of them.

Wa minority is one of the oldest people living in Lincang. The Wa people in Lincang City are mainly distributed in Cangyuan, Gengma, Yongde, Shuangjiang, Zhenkang and other places. Wa ethnic minority originated from the ancient Baipu ethnic group(百濮族群), at that time, they called themselves "Ba Rao", "A Wa" and so on. After 1962, it was collectively known as Wa minority. Wa has its own language, and it is divided into Buraoke, A Wa and Wa three dialects. The representative festivals of Wa are Monihei, New Rice Festival, etc.

Lahu is one of the earlier ethnic groups in Yunnan. It moved into Lincang and Shuangjiang around the 11th century, mainly distributed in Shuangjiang, Linxiang district and Gengma. The Lahu people have their own language and writing, mainly believe in primitive religion, some believe in Christianity and Chinese Buddhism. The traditional festivals of Lahu include Qinming Festival, Duanwu Festival, Torch Festival, etc.

The ancestors of the Bulang minority were the Pu people in ancient Yunnan, and they were one of the oldest indigenous peoples in Lincang. They are mainly distributed in Shuangjiang, Yunxian, Yongde and Gengma. The Bulang people have their own language but no writing, mainly believe in primitive religion and southern Buddhism. Festivals of Bulang are Hounan Festival, Guanmen (Closing Door) Festival, Kaimen (Opening Door) Festival, etc.

The Deang minority in Lincang belongs to the "Lao Pu Lao" and "Lao Pu Mao" branches, moved from Mengmao (present Ruili) and Myanmar. It is Mainly distributed in Zhenkang, Gengma, Yongde three counties. The Deang people have their own language but no writing, mainly believe in primitive religion and southern Buddhism. Major festivals of Deang are Guanmen Festival, Kaimen Festival, Shaobaichai festival, Zuobai Festival, etc.

Intangible Cultural Heritages and its Heritors in Lincang 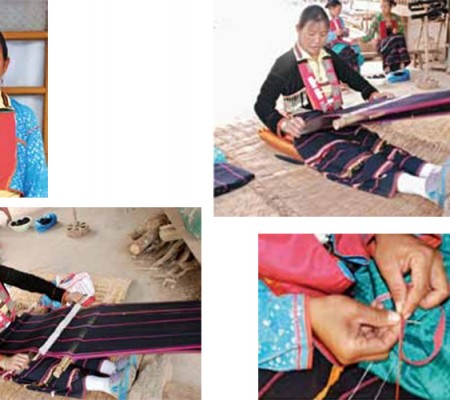