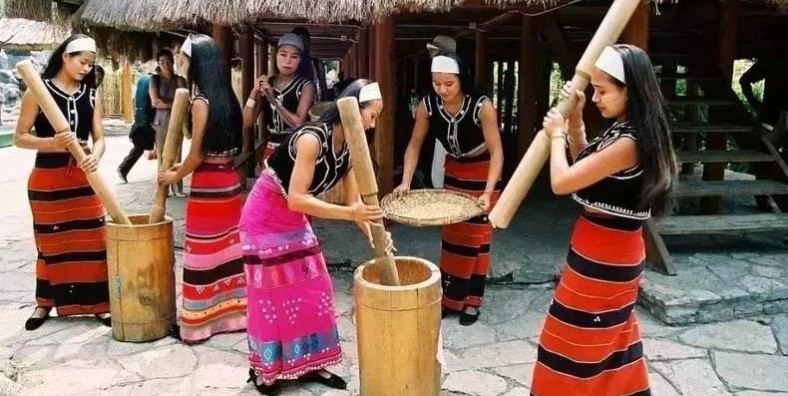 In our modern life, the things related to hand work are disappearing. More and more things are formatted and standardized. The objects we use lack the variety and uniqueness...

In our modern life, the things related to hand work are disappearing. More and more things are formatted and standardized. The objects we use lack the variety and uniqueness of manual production. In fact, the handcrafts in Yunnan are mostly interesting and even full of legends due to the differences of ethnic customs, history and culture. The handcrafts here are not only pretty, but also sweet, colorful and amusing. This trip will explore and learn about the handcrafts and craftsman in Yunnan, which still exist now, but are disappearing.

Today, you will arrive in Kunming first and then change another flight to Wenshan by yourself. Our tour guide and driver will meet you in Wenshan airport. Then drive to hotel.

Get up in the early morning. Our car will pick you up and drive about 4 hours from Puzhehei to A’E Xinzhai Village of Maguan County(马关县阿峨新寨村). Visit the masters of  Zhuang ethnic woodblock print. You can also visit their workshop and watch how they make the woodblock print.

-Yunnan’s A’e Xinzhai Village of Maguan County houses an area well-known for its diverse and beautiful traditional woodblock prints. These prints are made by male farmers from the Zhuang ethnic minority group. In Zhuang culture, men have traditionally produced prints while women have focused on producing elaborate embroidery work. Much of their work was done in obscurity; then in 1975, the male farmers once again began to pick up woodblock print making techniques. The woodblock prints nowadays depict agricultural scenes, the daily lives of the Zhuang people, and provide travellers with a glimpse of their traditions and customs. After 30 years of perfecting these skills, the village now boasts three generations of print making farmers. Many males in the village from old to young now participate in this activity, and there is even a 250 meter-long painting near the entrance of the village that depicts dragon worship, and depicts the daily customs of the Zhuang group. There are over 17 million Zhuang People that live in China, making it the second largest ethnic minority group in China. The majority of Zhuang people live in Guangxi and Yunnan. So if you are traveling around the area, you should consider heading to a Zhuang village to take a look around. 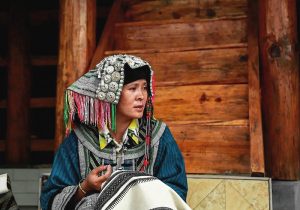 Drive about 6 hours from A’E Xinzhai Village to Chengzhai Bailuo Ethnic Village of Donggan Town in Malipo County(麻栗坡县董干镇城寨白倮族村). You can have some stops if you are interested in the villages on the way to your destination. After arrival, visit Chengzhai Village. You can see many villagers wearing their ethnic costume.

–Bailuo, a branch of the Yi ethnic group, have called Chengzhai home for several hundred years. Comparing to other Yi ethnic branches, the Bailuo members differ a lot as far as their clothing, dietary habits and dwellings are concerned. Due to their quaint costumes, exotic culture and distinctive Ganlan (stilted houses) architectures, Bailuo people have aroused great attention. Enriched by the ethnic culture, the batik craft highlights the culture of the Bailuo people who are traditionally adept at making quaint, elegant costumes on their own. Carrying modern aesthetic elements, and with delicate workmanship, it has brought great visual impacts one can’t help marveling at.

-Zhuang embroidery is mainly used for decorating dresses, and also for strap, curtain, sheet, etc. The embroidered ball which delivers amorous affection between man and woman is the most ethnic art work that represents Zhuang nationality. The main embroidery patterns are lotus, kylin, gourds, flowers and other auspicious patterns such as longevity.

Zhuang Brocade is one of the four famous Chinese brocades (the other three are: Yun Brocade from Nanjing, Shu Brocade from Sichuan Province, and Song Brocade from Suzhou). This splendid handicraft was originated in the Song Dynasty (960 – 1276 AD). They are woven with cotton, silk or flax threads into colorful patterns. Images of flowers, plants and animals are mostly adopted. The Brocade is very durable, and is widely used in making quilt covers, handbags, aprons, table-cloth, scarves, wall hangings, cushions, etc. 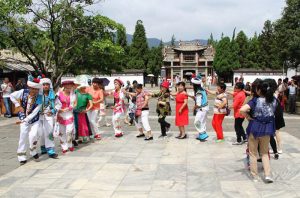 This morning, drive to the high-speed railway station in Guangnan County. Depart from Guannan.
You will arrive in Kunming one and half an hour later. The driver will pick you up and take you to Yunnan Ethnic Villages. In this theme park, you will visit a master of Miao ethnic embroidery.

-The Miao are among the larger ethnic populations in China. They also live in neighboring countries as well as in the United States and Australia, where they are more generally known as the Hmong. In China, they are mostly concentrated in Guizhou Province and Yunnan Province in the southwest, where subgroups are identified by their dress and embroidery motifs, such as “Big Flower Miao” and “Small Flower Miao.” Working with silk and cotton thread, as well as horsehair, embroiderers adorn cuffs, sleeves, collars, and tunic fronts with designs of mythical animals (dragons and phoenixes) and ordinary insects, fish, and flowers. These designs are not only decorative; more importantly, many record daily life, life cycle events, and community legends and history.

Today, drive to the airport and you will finish your ethnic craft culture tour in Yunnan.

Indian Restaurant in Kunming
How to Get to Chengjiang County from Kunming
Nijiao Yi Ethnic Town in Qiubei County, Wenshan
Kunming is preparing for un biodiversity conference 2021 (Kunming 2021 CBD)
How to Get to Fugong County from Kunming
Elevation of Laoshan Mountain, Wenshan, Yunnan
Shangmiha Village of Zhetai Town in Guangnan County, Wenshan
Mimalong Village of Lubiao Subdistrict in Anning City, Kunming