Guanyin (Goddess of Mercy) Temple is situated in the middle of Laozhai Village in the west of Zhangfeng Township, Longchuan County. It is a famous scenic spot in the remote frontier of Yunnan and is especially known for 《the Chinese Tripitaka》 housed in it. On entering Guanyin Temple, one will be greeted by the flying eaves at the gate top.

Exploring ahead, you can see a big incense-burner erecting on a platform in the courtyard of the temple. Pilgrims frequently pay visits to Guanyin Temple and usually burn incenses as sacrifices. The incense-burner, 1 meter high, is a tripod similar to Simuwu Rectangle Tripod (14th-11th century B.C) unearthed in 1939 in Henan Province. A garden has been cultivated behind the platform. It’s planted with chrysanthemums and thrifty pine trees. A century-old cypress can be seen growing on the left part of the garden. Though “aged” and “emaciated”, it still perseveres to uphold its large and luxuriant canopy. In the middle of the garden two unnamed trees are flourishing with symmetrically twisting branches.

At the end of the garden are the Majestic Hall (Da Xiong Bao Dian) and Chanting Hall (Nian Jing Tang), both of which are traditional pavilions connecting to each other thus giving birth to another spectacular scene in the temple. Inside the Majestic Hall, the Three Bodies of Sakyamuni are enshrined, all of whom are vividly sculpted with benignant looks and radiant smiles. In front of the Three Bodies, several mini-sized Buddha figures are inlaid in orderly-arranged frames. Besides Buddha figures, the Majestic Hall is also equipped with a huge bell and a drum for Buddhist sacrificial ceremonies. 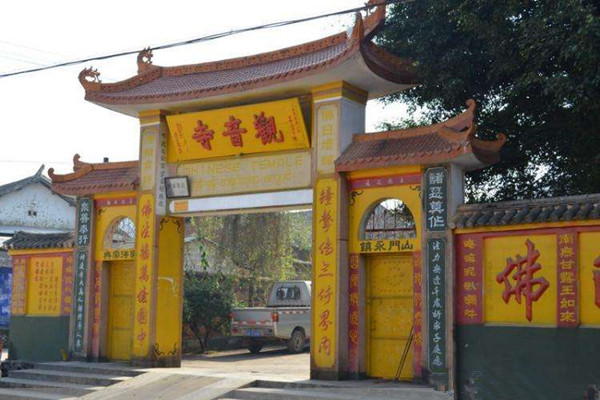 At the center of the Chanting Hall, the Goddess of Mercy in a Zen gesture (palms together) is seated on a pedestal. In front of her is Vairocana (Sakyamuni or Buddha) that is flanked by two Bodhisattvas: Bodhisattva Samantabhadra (Puxian) and Bodhisattva Manjusri (Wenshu). Puxian and Wenshu are said to be two junior sister apprentices of the Goddess of Mercy. Both of them are in Zen gesture too and have respectively a white elephant and a lion as their rides. What’s more, at the left front, a monk statue looking like Tang Seng (Master San Zang is nicknamed “Tang Seng” in the story of “Pilgrimage to West Paradise”) is holding a bowl and Buddhist stick.

The Do’s and Don’ts in Buddhist Temple:

2)Into the temple: you should go around from left to right instead of from right to left.

3)You should burn the incense outside the temple in order to avoid fire because most of the monastery buildings are made of wood.