Bangbang Festival is the Lijiang Naxi traditional festival, it will be held on each January 15 (lunar calendar), which will be lasted for three days.

During each eighth February (lunar calendar), the Sanduo Festival is the most grand traditional festival of Naxi people.

Every year on the third lunar month’s fifth day, Dongba Fair is celebrated in Lijiang Yushui Village in high spirits.

This is a famous festival of those of the Yi and Naxi Group living in Ninglang County and Lijiang old town.

July Festival is another important festival of Naxi people. It occurs each middle July according to lunar calendar and mainly involves trading of horse or cows, also called as Horse Trade Festival.

Zhuanshan Festival usually takes place on July 25 (lunar calendar), which is one of the most important festivals for Mosuo people living along the charming Lugu Lake.

Naxi ancient music is regarded as soul of Lijiang, and known as “living fossil of music”.

Kaquewa Festival is the only New Year Festival of Dulong people. It is held during the 11th and 12th lunar months, there is no fixed date and the festivals lasts 3-5 days.

The Kuoshi Festival, the Lisu New Year, is the biggest festival among the Lisu people. Generally, the festival lasts from the 5th day of the 12th lunar month to 10th day of 1st lunar month.

14. The Festival of Climbing Sword-poles of Lisu People

It is one of the traditional festivals among the Lisu people, in memory of Wang Ji(王骥), a minister of the Defense Minister in the Ming Dynasty.

15. The Flower Festival of Nu People

It is Nu people’s traditional festival on the 15th day of the 3rd lunar month when all the mountains are covered with blossomed azaleas. It is said that these azaleas bloom to memorize the beautiful girl called Arong who invented the gilding ropes.

Chinese Name:香格里拉藏族家访（白天） English Name: Tibetan Family Daytime Visiting in Shangri-La Brief Introduction Tibetan people are one of the most important Chinese minorities with unique traditions and customs, who are...

About Thangka Thangka is a complicated, composite three-dimensional object consisting of: a picture panel which is painted or embroidered, a textile mounting; and one or more of the following: a...

Bonfire and Dance Party of Naxi Ethnic People could be arranged in the hostels of Tiger Leaping Gorge if some tour group really need. Yunnan Exploration arranged many times for... 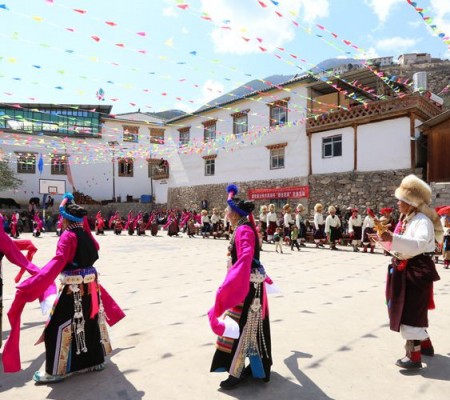 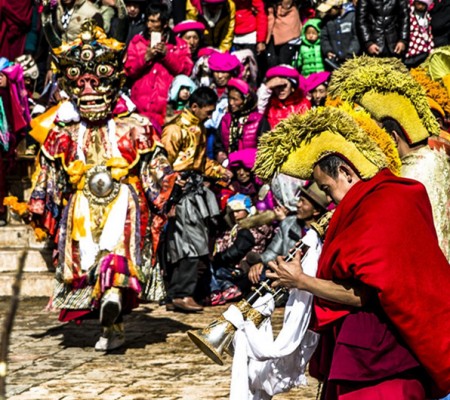 Shenchuan Reba Dance(神川热巴舞) is the rutial dance of Lisu Ethnic Minority. It reflects the Lisu people’s cultural and religion. It is one of the Intangible Cultural Heritage in Yunnan.  ...