Holding a wine pot, Li Biqing performed Achimugua with other villagers from Tongle village for visiting reporters on June 16, one of the grandest ceremonies Lisu people hold for guests.

Born in 1968, Li is now one of the best, but few, performers of Achimugua in China, a traditional dance created by the Lisu minority group from south China’s Yunnan province thousands of years ago. Yet, not all Chinese people have heard about the name of Li, neither have they seen this traditional Chinese art which is being protected by the Chinese government.

Achimugua (阿尺目刮) is the transliteration of the dance’s Lisu name in which “achi” means “goat” and “mugua” means “song” or “melody”, which is why Achimugua is also called “Goat Dance.”

While Achimugua is most popular in Kangpu, Badi, and Yezhi towns in Weixi county, Diqing Tibetan Autonomous Prefecture, the only below-provincial level Tibetan autonomous region in south China’s Yunnan province, so far there is no written record of when this performance came into being.

The current stories about Achimugua are mostly inherited from older generations of Lisu minority group whose ancestors used to live in the mountains as hunters and nomads. Being isolated from the outside world, the ancient Lisu people established close relations with the goat they were raising, which made them very acquainted with the voice, movement and habit of the goats. To better communicate with the goats, the Lisu people began to imitate their goats’ sounds and body movement, through which Lisu people gradually created a kind of performance which imitated the movement of a goat. As the goat played an important role in ancient Lisu people’s life, it was also regarded as the totem by the Lisu people. 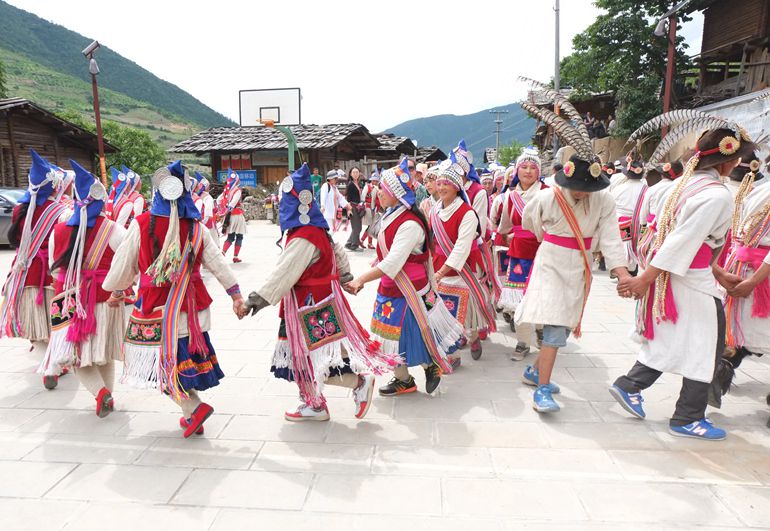 Besides important guests, Achimugua is also performed during wedding ceremonies, important festivals and other significant events of the Lisu people.

Tall, dark-skinned, and strong, Li talked to reporters in a sonorous voice accompanied by apt body movement, which is likely shaped by the way Achimugua is performed.

Without any instrumental accompaniment (except flutes occasionally), Achimugua performers sing from the beginning to the end while they stamp their feet in accordance with the rhythm of the song. The performers basically consist of two teams – a female team and a male team, with each team led by one person. When the leader of a team leads the performance, the other members walk behind him clockwise in a circle.

The transition of the lead team from the male to female team, or from the female to the male team, comes as a chorus with linking words begins to be sung by the lead team, and after another two circles of dance with performers stamping their feet in accordance with the original rhythm, the other team begins to lead the performance.

This process can be repeated many times as performers quicken the stamping of their feet. Although Achimugua now has over 10 different variations, the very spirit of this traditional art of Lisu people remains throughout history – imitating the sound and movement of a goat and inspiring audiences’ fascination of mountain, river, meadow and other elements of nature. 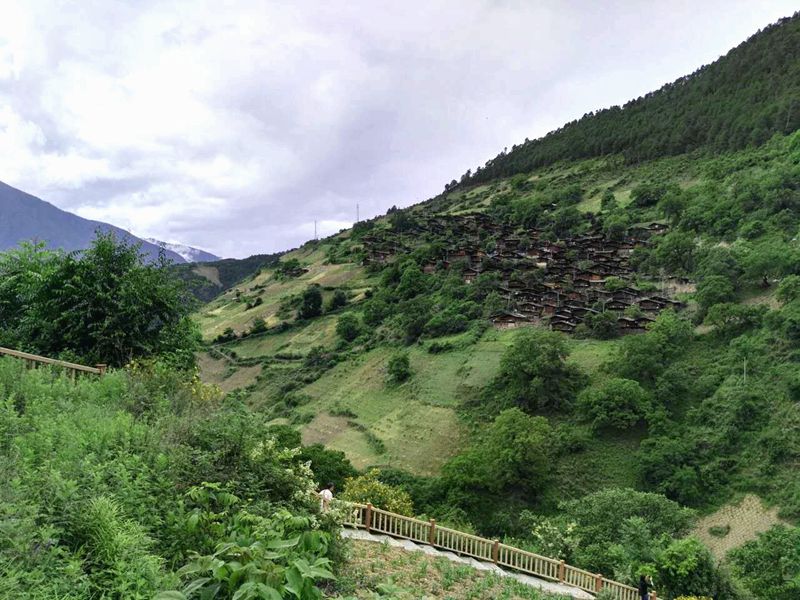 The view of Tongle village seen from a mountain on the west bank of Lantsang River. Photo: Chunmei

Coming from Tongle village of Yezhi town, one of the three towns which are now preserving the Achimugua dance, Li is obliged to teach young people in Tongle and other villages how to dance Achimugua as he is one of the best performers of Achimugua in the village which has over 600 Lisu people. Although Li said over 90% of the people in the village can dance Achimugua, he still thinks he has a duty to pass this traditional art to the younger generation as more and more young men today are leaving the village and working in big cities all year long to make money.

According to Li, there are now around 40 professional performers of Achimugua in the village and each week he has one class at a local primary school to teach the dance.

Founded in the Tang Dynasty in 794, Tongle village is located in the Yunling river valley of Hengduan Mountains on the east bank of the Lantsang River. Its remote location makes it harder to popularize the art of Achimugua to outside world.

Li was happy to see the reporters who visited the village on June 16, because it was an opportunity to bring Achimugua to other parts of the world.

“Very few people of my age in the village like to dance Achimugua because it is sometimes too tiring, and more and more young people are living outside to work. I really hope the story of Achimugua can be told to more and more people from outside China,” he said.