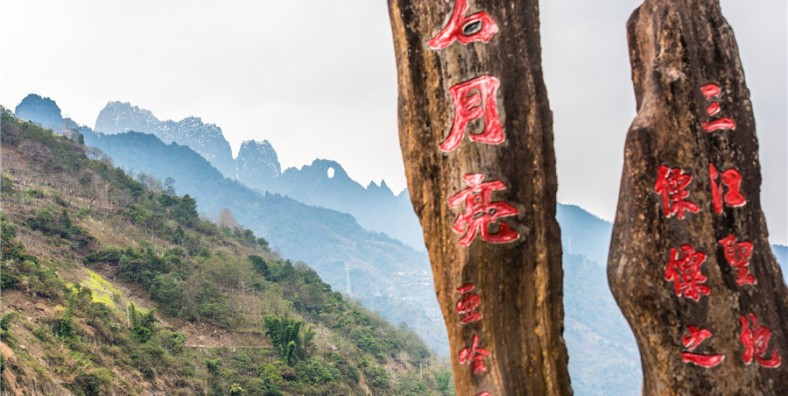 The Stone Moon lies on the Gaoligong Mountains. It is a round stone cave formed by long period of erosion of rain and snow. When the sky is clear and bright,it looks like the bright moon high in the sky.

Why is Stone Moon So Special?

The Stone Moon lies on the Gaoligong Mountains. It’s a hole about 40-50 meter wide and 30 meters high. Viewing from the distance, people would find the hole just like a bright moon over the sky. Local people also call it Yabaha, which means Stone Moon. The precipice is very cliffy and the weather on the mountain top is very changeable, so you can’t get to the top if without courage and perseverance. 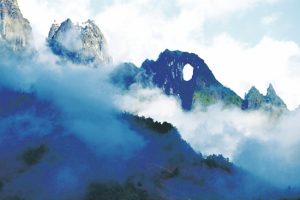 Where is Stone Moon – Location

At the central part of Gaoli Gongshan Mountain, there is cloud-kissing peak. At the place of 3,360 meters, there is a moon-shaped stone.

How is the Stone Moon Formed

Nu river valley is located at the junction of the Eurasian plate and the Indian plate. The strong geological stress and the rapidly rising crust constitute the unique geological wonder and beautiful natural scenery of the Nu river valley. The Stone Moon is a round stone cave formed by long period of erosion of rain and snow.

Long time ago, there lived a pair of Lisu brother and sister on the edge of Gaoligong mountain in the Nujiang river bank. The brother was named Qisha and sister was Lesha. The brother made a living by hunting on the mountain and fishing in the sea, while the younger sister by weaving and farming at home. Although they was not very rich, but lived a sweet life.

Later, the brother fell in love with little dragon princess. When the king dragon heard this, he was very angry and at the same time he was strongly against them. He use the magic to make the rain pouring for seventy – seventy-nine days. When the god saw this, he gave the brother a crossbow and two arrows to shoot through the highest mountain, so that the flood would never cover the mountains. So the brother and sister were saved.

From Fugong County, tourists can take the bus to Lishadi Town. Then climb Gaoli Gongshan Mountain by a small mountain path which will take about one day. You can stay overnight in the village under the stone moon. The next morning climb up to it along the cliff. You will enjoy the wonderful sight of Nujiang River Grand Canyon while you astonished by the beautiful view of the Stone Moon.