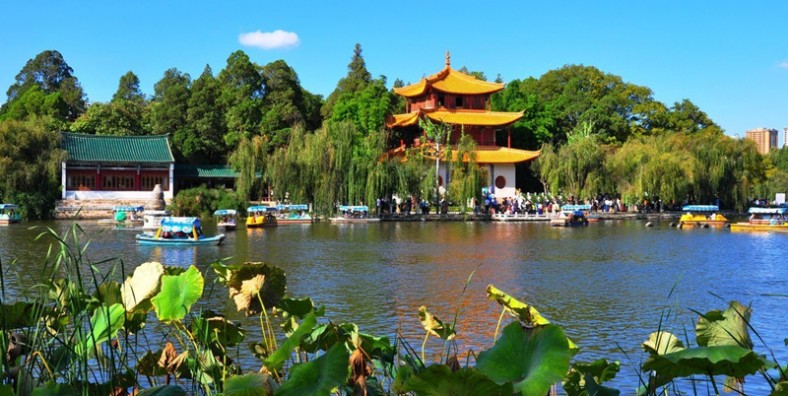 Why is Daguan Pavilion Park so special?

In 1682 a monk named Qianyin built a small temple here to teach Buddhist dharma; eight years later, that’s in 1690, the official of Yunnan Province, Wang Jiwen, was so attracted by the beautiful natural views here, began to construct a whole park including halls, pavilions, bonsais, rockeries, trees and terraces. Grand View Tower has been an attraction ever since with the most visited spot being Daguan Park.

The History of Daguan Pavilion Park 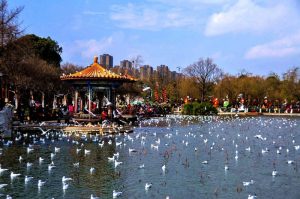 In 1696, Wang Jiwen, the governor of Yunnan, carried out a largescale construction of a two-story pavilion. Ponds were dug, embankments were constructed, and trees and flowers were planted. With a good view of the waters and hills in the distance, and the sailing boats and trees in mist, the pavilion was titled Daguan (“Grand View”) pavilion. In the later years, the Daguan pavilion had twice been reduced to ruins by warfare and flood. In 1883, Chen Yuying, governor of Yunnan and Guizhou Provinces, ordered Monk Xingtian to take charge of the renovation of the pavilion, and the pavilion has remained intact ever since.

Since the Daguan pavilion was built, men of letters coming from far and near in the country have often gathered here, composing and reciting poems. During the past two to three hundred years, many excellent works and poems have been created. Among them, the Long Couplet written by Sun Rangweng has for many years enjoyed the highest reputation around the world. Daguan Park has become famous due to Sun Rangweng’s Long Couplet.

The Structure of Daguan Park

Like many other Chinese ancient buildings, Daguan Pavilion also had been in disarray, destroyed and restored several times because of the dynastic changes and the civil wars. The present-day square, three-storied pavilion was established in 1883. At the entrance there is the longest antithetical couplet which was written by a famous Qing Dynasty scholar named Sun Ranweng (also called Sun Ran); this couplet of 180 characters is one of the most valued cultural treasures in Yunnan Province. The first part of the couplet describes the beautiful and magnificent natural views before your sight, tell people to enjoy and treasure. The second part reviews the 2000 years’ history of Yunnan,awakens to that no matter how successful or frustrated you are, all will be in nothingness in the end.

What to See in Daguan Pavilion Park?

East garden is located in the east side of Jinhuapu, consist of “Qiushang and cypress garden” two private garden, east and south facing Grand View River going into Dianchi lake Caohai channel. Inside the garden pond there is interweaved lotus, surrounded by willow embankment, bridge across the creek, pavilion and corridor is near the lake, deep and serene scenery.

In the southeast of Building Beyond Building, it is separated by Dianchi Lake channel. Garden pond streams are around willow embankment, zigzag bridge arch bridge, the small pavilion arbor, the south garden main building is a two-storey building match well of Chinese and western style “Jinhou Building”. There is equipped with guest room, dining, conference reception and other service facilities. 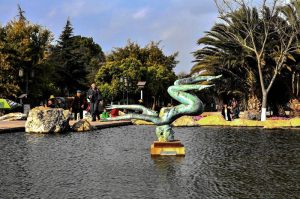 Grand View Park miniascape garden covers an area of 4500 square meters, is one of the largest miniascape garden in Kunming area. In the garden the trees are luxuriantly green, flowers are bright-colored, landscape set each other off, pavilion corridor is splendor, all kinds of bonsai scattered all over like stars in the sky. Besides the winding white wall, in front of the pavilion corridor are filled with trees, match with rock bonsai. Beautiful old trees are in sight: towering stands, each tree has its own form and each is graceful in its own way. The garden has a lot of the old pile with more than one hundred year of history. A crape myrtle planted during Qing dynasty Qianlong period, so far, more than two hundred years old, it is said that the early 60s, a Chinese-American paid $30000 to buy but failed, now it has become a miniascape garden treasure.

Jinhuapu is bounded by water on three sides and it is the main scenic area of Grand View Pavilion Park. Park entrance is facing Jinhuapu double-hipped roof arch gate. The north and east is a large lotus pond. “Grand View Pavilion” is the main building of Jinhuapu, pavilion, hall and other ancient architectural complexes constructed in Qing dynasty Kangxi period, and connected by the corridor, the past two years there are new cultural attractions like “Huaxia Long Couplet Corridor”, “the Grand View Pavilion inscription rubbings exhibition”, “long couplet history cultural center” and other cultural attractions. Here gather together the history humanities landscape of the Grand View Pavilion and it is also the main exhibition area of flowers exhibitions during the spring and autumn.

West Park is located in the west side of Jinpuhua, which is new long couplet culture park of 200 mu of land requisition in 1998. There are 30 acres water area, willow embankment arch bridge, green grass, waterside pavilion and stone path, waterside pavilion.

Building outside the Building

It is located in the southeast of Grand View Tower, surrounded by water, willow embankment, facing the Grand View Tower by three pools of Yinyue Lake. Building outside the Building is three-storey, the green colored glaze gable and hip roof looks like gaily-painted pleasure-boat. 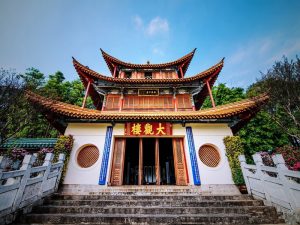 What to Do in Daguan Pavilion Park?

Construction of Daguanlou was completed in the 1690s. Perhaps more famous than the view provided by the pavilion is the poem carved into the gateposts of the south-facing door. It is comprised of a series of rhyming couplets composed by the poet Sun Ranweng (孙髯翁) and is purportedly the longest series of its kind ever composed in China.

The “Long Couplet” (长联) was written during the Qing Dynasty and is considered to be one of Yunnan’s most important pieces of cultural heritage.

The poem is divided into three sections. The first describes the scenery around the pavilion and then moves on to a lengthy explanation of Yunnan’s history before ending with a meditation on the Buddhist concept of nirvana.

The buildings adjoining Daguanlou are often congregating places for people to play Chinese chess, majiang or cards. Currently three of the buildings house a hundred year photo retrospective of Dianchi Lake called “A Clear Dianchi, A Prosperous Kunming” (滇池清,昆明兴). The exhibit of more than 100 landscape photos is free to visitors.

Many of the photographs show scenes of Dianchi Lake in its healthier days — often of people swimming in clear blue water in times before algae-blooms made such recreation impossible. Other photos show massive storm systems boiling over the city or beautiful sunsets over Kunming’s Xishan.

Daguan Pavilion Park is a botanical garden rich in ornamental plants. Of its plant varieties of more than 600, more than 200 are indigenous plants. Compared with other parks, its over 800 potted landscapes and 300 breeds of chrysanthemums take the lead in Kunming. Moreover, the about 70,000-square-meter pond with over 10 breeds of water lilies makes it the biggest water lily watching base in Kunming.

4. Having Fun in the Amusement Park

Towering above everything in the park is the 90-meter Ferris wheel. When entering the city from the west, it is Kunming’s first and most unmistakable man-made landmark. Giant, silent and ponderously slow, the wheel takes 30 minutes to complete one revolution. Upon reaching the top, passengers are provided with some of the most spectacular views of Kunming available in the city. Tickets for the ride cost 30 yuan.

Littered around the Ferris wheel are several other rides. Some are well-maintained and routinely in operation. Three roller coasters, small, medium and large, are the biggest attractions and all offer riders the chance to hurtle upside down, even if just for a moment.

Daguan has at least five carousels although only the two-storey one was in operation the day we visited. There are also patriotic bumper cars sporting US flag and Statue of Liberty motifs, as well as several revolving rides.

One ride we saw was so covered in drying laundry and rust that we were unable to tell what it used to be. Admission to the park does not include entry to any of the various attractions or access to the haunted house located underneath the Ferris wheel.

Tickets for the smallest rides are 10 yuan and prices max out at 50 for the largest roller-coaster. Photographs of you enjoying, or not enjoying, your experience are available for 10 yuan.

The main gate of Daguan Park is located at the terminus of Daguan Road.

A taxi to the park entrance from the Green Lake Area should cost roughly 15 yuan.

1. Visitors are advised to always carry changes of clothing due to the large variations in temperature between day and night.
2. The climate is relatively dry, so drink more water every day.
3 Protecting oneself from strong UV radiation at high altitude.
4. Protecting oneself from altitude sickness. Lessen the effects of altitude sickness, avoid strenuous exercise and have plenty of rest.
5. Respect local customs , habits, and religious beliefs.