Chuxiong Culture is diverse and colorful. It is a place where multi-ethnic groups inhabit. Different nationalities create different culture. As one of the important destinations in the classical Yunnan Travel and a multi-ethnic place, Chuxiong is home to 28 ethnic groups, such as Yi, Lisu, Miao, Dai, Hui and Bai . Each ethnic minority there has its own unique customs, traditions and architectural styles, making Chuxiong picturesque place. You will have the chance to experience the life of minorities people, learn about their lifestyle, religion and cuisine. The unique scenery, coupled with fascinating Chuxiong Culture makes it attractive and charming. Come to Chuxiong and take a Chuxiong Cultural Tour.

As one of the cradle land of human beings, Chuxiong Prefecture has profound history and brilliant culture. From 1960s to 1980s, the fossils of the Ramapithecus which lived eight million years ago were discovered in Lufeng County; the fossils of man apes that lived three million years ago were unearthed in Yuanmou County. In 1965, the Homo erectus yuanmouensis fossils, the stoneware as well as the traces of using fire were discovered in Yuanmou County. In 1975, the earliest bronze drums of the world, which indicates that the ancient ancestors of Chuxiong created the ‘Bronze Culture’ in 2,500 years ago.

More about Temples in Chuxiong

Architecture is a comprehensive art, which is an important carrier of culture that integrates many cultural elements including space art, visual art, plastic art and folk culture. The dwelling is the material basis guarantee for the stability of people's lives. It is a comprehensive carrier that integrates human material culture and spiritual culture. It also reflects all aspects of people's life. Traditional residential buildings carry the symbols of ethnic religious beliefs, aesthetic pursuits, and material and technological levels. Chuxiong traditional dwellings have a long history and rich culture, and they have a place in Yunnan residential buildings. Residential building is one of the traditional architectural contents. Because it carries rich content, involving regional and ethnic characteristics and it has obvious local characteristics and strong ethnic characteristics. The following attractions are the best places to know the architecture culture.

Yi cuisine is characterized by its sour and spicy flavors. Rice, corns and buckwheat constitute the main diet. Mutton, pork and beef are consumed substantially. Besides, roasted tea and rice wine hold an important part during socializing occasions.

Crying marriage is one of the most distinctive forms of the marriage customs of the Yi people. Before the wedding of the Yi people, the bride shall cry under the accompany by a female companion. That is to say, the bride shall sing the "Wedding Lament" while crying. In general, the "Wedding Lament" has traditional lyrics. Of course, the bride can also extemporaneously play. The bride can sing freely while crying to express the joy or sadness.

Like many other cities in Yunnan, Chuxiong is the place where a great number of ethnic minorities gather. Yi is the main ethnic groups in Chuxiong. What’s more, Lisu, Miao, Dai, Hui, Bai and other ethnic minorities can be found here. Therefore, the traditional festivals of Yi, Lisu, Miao, Dai, Hui and Bai, unique local operas, dances, music and other art forms are the common entertainment methods in Chuxiong. Multi-ethnic settlement makes Chuxiong Prefecture full of colorful ethnic culture, whether the festivals or the food.

More about Ethnic Towns in Chuxiong

There are many festivals in Chuxiong, whether it is the Torch Festival or the Yizunian New Year, the warm flames, the jubilant songs and dances, and the loud drinking songs can be exciting. From these festivals, we can see Chuxiong's unique festival customs... 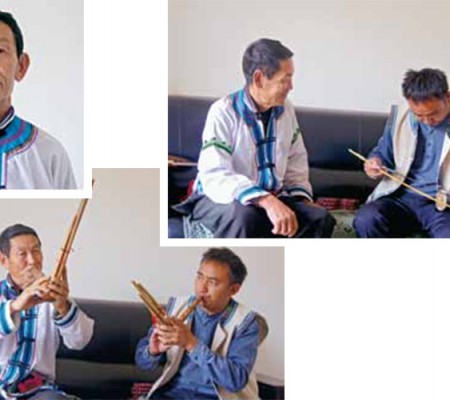