Gantong Temple(感通寺), also known as Dandshan Temple(荡山寺), is located at the northern bank of the Mocang Brook, and the southern foot of Shengying Peak(圣应峰) of Cangshan Mountain. Embraced by undulating hills, green trees and beautiful surroundings, the place has always been a scenic spot and a sacred place of Buddhism. It was constructed in the Tang Dynasty and there were 36 halls in all. Owing to ravages of soldiery in history, all the halls except one have fallen into ruins. The other is now under reconstruction. In the 17th year of the Hongwu era (1384) of the Ming Dynasty, the abbot Wuji led some of his disciples to go on a pilgrimage to Beijing and offered white steeds, camellias and white tea as tribute to the emperor. And from then on, the fame of the temple spread widely and the temple has become very popular among the people as No. One Temple is the Dali area.

Gantong Temple is located in south of Shengying Peak of Cangshan, 5 km from Dali Ancient Town and 11 km from Xiaguan. The Gantong Temple is backed by Cangshan, which is covered with snow in the four seasons, and faces the vast Erhai Lake.

How to get to Gantong Temple?

It takes about 10 minutes by car from the ancient town of Dali. It takes about 40 minutes to walk up the mountain from the intersection. Visitors can also reach the Gantong Temple along the Cangshan Jade Belt Yunyou Road(玉带云游路), but it is far. 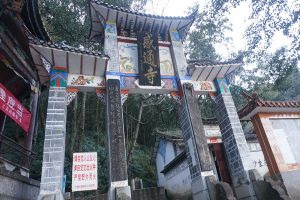 The Gentong Temple enjoys a long history and goes through vicissitudes. It has risen and fallen several times. In its prosperous time, there were 36 brothels. According to legend, the main hall is “Dayuntang”(大云堂). In the southwest of today’s Gantong Temple, there are still sites. There are also important buildings such as “Banshan”(班山), most of which were destroyed in the war between the Xiantong era of Qing Dynasty(清咸同年). The existing temples were rebuilt after the Guangxu era, and gradually restored since 1981.

The Gantong Temple is not only famous for its beautiful natural scenery, but also a series of celebrities, relics and many vivid and touching stories, such as Yang Sheng’an(杨升庵), Li Yuanyang(李元阳) and Monk Dandang(担当和尚).

2 thoughts on “Gantong Temple in Dali”