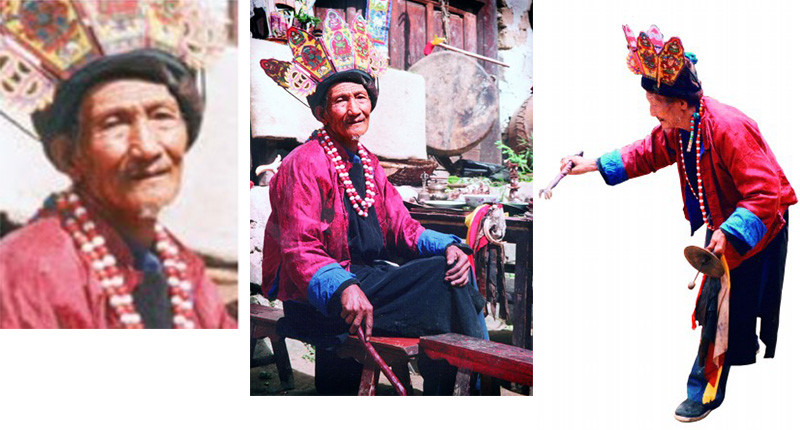 In Naxi, people who can be called Dongba must have a comprehensive grasp of Dongba culture and be able to carry on the overall inheritance. Painting is a necessary condition for Dongba. The Naxi ethnic groups worship and sacrifice these images on paintings.

He  was born in the family of Dongba(东巴) and is the sixth generation of his family. His Dongba paintings are inherited from his father Dongba He Er(和尔).When He Xun was 6 years old, he followed his father He Er Dongba who is named Dongsha  in Dongba langueage to learn Dongba characters, Dongba paintings and rituals, as well as to learn the skills of making masks(面具), cards(课牌), paper-cutting(剪纸) and paper-binding(纸扎技艺). When he was young, he became the sixth generation of Dongba in Shuming village(暑明村)  after passing the test of Zhizhan ceremony(汁沾仪式) . He Xun knows a lot of Dongba characters, is familiar with various Dongba dances, and can host large-scale Dongba sacrificial activities. He has hosted hundreds of sacrificial activities. Every sacrificial activity must draw a batch of Dongba paintings and abandon the paintings which is used after sacrificial activity. Therefore, his painting ability and expressive skills are constantly improving. Most of his works are about various gods, Buddhas, animals and plants, demons and monsters, and all kinds of magic instruments.

The Kinds of Sacrifices in Naxi