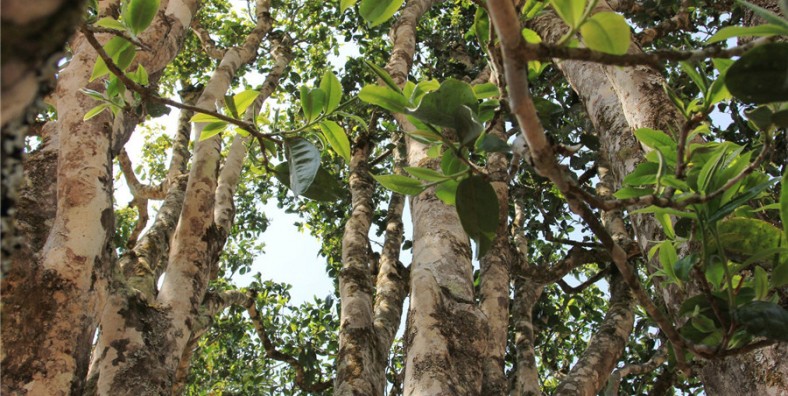 Lao Wu Mountain（老乌山） is a branch of the middle part of Wuliang Mountain.（无量山） It has been under Yinsheng（银生） jurisdiction since ancient times.Zhentai town Zhengyuan county Puer city（普洱市镇沅县镇太镇）, Anban town（按板镇）, Mengda town（勐大镇）, Small Jinggu township Jinggu town（景谷县小景谷乡）, Fengshan town（凤山镇） which spans tens of kilometers across the core production area of Puer Tea. Here, the altitude is 1500-2200 meters, the annual average temperature is about 14 degrees Celsius, and the annual rainfall is 1390-1502 mm. Such geographical conditions make the high forest vegetation coverage of Laowu mountain（老乌山）, the climate is warm and cool, rainwater is abundant, clouds and mists all the year round, the soil is rich in a variety of minerals and has good air permeability, which makes it has an ideal environment for tea growth. Such geographical conditions make Lao Wu Mountain（老乌山）has the title of “one mountain has four seasons, ten miles have different days”, And it grows high-quality Pu’er tea in the destiny of nature. Achieved its reputation as one of 26 famous ancient tea mountains in Puer City.

Lao Wu Mountain（老乌山） has a long history of tea planting and a wide range of planting areas.Because Laowu mountain（老乌山） is located in the remote southwest ethnic minority area, all kinds of foreigners came to the Lao Wu mountain（老乌山） to avoid war, lawsuits and deserts in the Yuan, Ming and Qing dynasties,they live in harmony with the local minorities and cultivate tea in the wasteland. Therefore, tea plantations on Laowu Mountain（老乌山）are widely distributed and relatively scattered, and some tea plantations are still hidden in the deep mountains unknown. At present, Zhenyuan County（镇沅县） will carry out a detailed survey. It is estimated that the area of ancient tea gardens preserved in Laowu mountain will exceed 1647 acre. The area of ancient tea gardens is second only to Jingmai mountain（景迈山）, and the total area of tea is nearly 6589 acre. 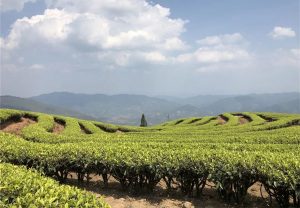 Because of the high salt production in Anban Street（按板街） and Zhentai Street（振太街） in history, merchants flooded in and formed a fixed mountain street. With the increase of tea, the tea of Lao Wu mountain（老乌山） was transported to Anban Street（按板街） and Zhentai Street（振太街）,become the local famous tea gradually. The caravan has also become the protagonist here.

Buddhism built temples and preached Buddhist culture here, such as the construction of Sone Temple （石头寺）and Monk Temple (和尚寺). The tea-horse road(茶马古道) from Stone Temple (石头寺) passes Laowushan Mountain (老乌山) to Baomu Well(抱母井) going through Weiyuan Hall(威远厅) to Pu’ er prefecture (普洱府). The surrounding land along the road is fertile, flat and has many villages, all of which are planted with tea especially the existing known as “Kuzhushan” stockade (“苦竹山”寨)of the ancient tea garden. Taoism also settled on here to preach and to build Taoist temple, become the most southern spread of Taoism in China. Its surrounding area of Wenli, Haizi and other places of tea planed to find a good location to form a market with regular street about tea for horses, so even in remote mountains also had a city to attract people.

Heshangsi Temple (Monk temple/和尚寺) is the highest peak of Laowushan Mountain(老乌山), which is near to the big well, small well, and Anban well（按板井）. You can pass Yinsheng City(银生城) or the “Jinshanyakou”(金山丫口) of Ailaoshan Mountain(哀牢山) to Beijing. There is a mountain lake beside the temple called Boluo Dam (波啰坝), which is wide，silence and clear with swarms of fish and meadows all over the mountains. The mountain flowers in full bloom of the lunar calendar on April 16, you can fish in the lake, and replace new things in that day, and meet new people to gather carnival, known as “Fish festival” (鳌鱼节) or “Aoguang Meeting”（鳌光会）, which is the common “valentine’s day” and the annual ceremony in the Laowushan Mountain(老乌山). 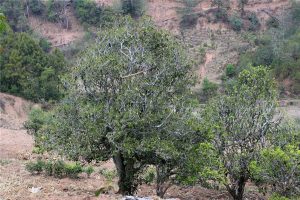 Laowushan Mountain (老乌山) began to cultivate tea from the Tang Dynasty and had a history of more than one thousand years. Three very old tea trees grow on the old Laowushan Mountain （老乌山）, which is the highest, largest and oldest cultivated ancient tea tree found in Zhenyuan County (镇沅县). Among them, there is an ancient tea tree in the border of Monk Temple (和尚寺). The root diameter is 2.68 meters, the tea tree is as high as 10.6 meters, the canopy width is 7.3×8.7 meters, and there are 6 branches in the place more than 1 meter away from the ground. The diameter of a branch is more than 30 centimeters. It is the largest one among the existing ancient tea trees, called the “Tea Tree”. Every year, people on the tea mountain hold regular ceremonies to worship for venerating.

Laowushan Mountain (老乌山) grows tea all over the mountain, which is almost black and always boils it into thick soup with good taste. Most of here are in the Danyan terrain (丹岩地形). Although the surface of the ‘Pig Liver Stone’ is used, the deep rotten stone is densely covered, and the tea tree root is so deep and strong that can absorb and hide energy. And in the long-term growth of the integration, it grows better. The tea made here full of culture characteristics with dignified fragrance, sweet and fragrant taste, and the cold soup is better to sip. Laowushan Mountain (老乌山) is also used to making a kind of “Sweeping tea” (扫把茶) that is popular among tea merchants. 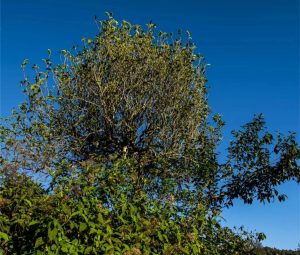 In the new round of tea rejuvenation, the Party Committee and the government of Zhenyuan County (镇沅县) proposed to advocate the brand of tea tree resource of “the king’s hometown of the world’s wild tea tree” to deeply understand the tea culture of this town, building the tea brand of Laowushan Mountain tea(老乌山茶), Madeng tea(马邓茶), Wuyi tea(五一茶). Through attracting investment, we will build the Laowushan mountain tea manor(老乌山茶庄园) and make the tea mountain of Laowushan Mountain （老乌山）into another regional brand after Jingmai Mountain(景迈山).