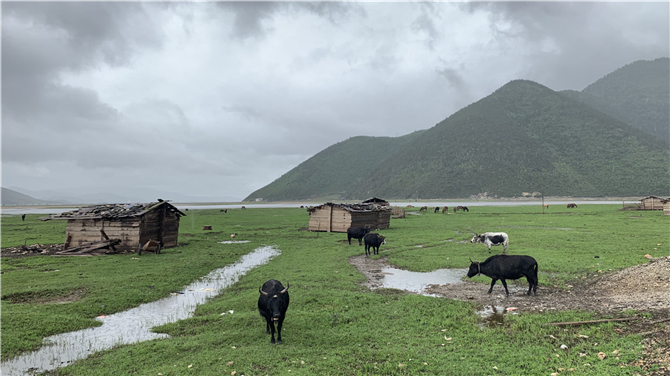 The Napa Lake is one of the biggest draws for visitors to Shangri-La, Yunnan province.

Arro Khampa boutique hotel is located in Dukezong town in Yunnan province’s Shangri-La. Its founder, 49-year-old ethnic Tibetan Dakpa Kelden, and his team ceremoniously greet guests with khata－silk scarves traditionally presented to visitors－to the soundtrack of a xianzi (a two-stringed bowed instrument) strummed by one of the employees.

The hosts start singing and dancing long before their guests arrive. It’s natural in Tibetan communities, where a saying goes: “If you can talk, you can sing. If you can walk, you can dance.”

It’s so commonplace that outsiders often join in without reservation, even though they don’t know the lyrics or moves, he says.

Dakpa Kelden is positioned between tradition and modernity in every sense. His hotel is located in an ancient quarter of the town (known as Dhokar Dzong in Tibetan)－an area that has been rebuilt in its original style after a 2014 fire incinerated several city blocks－while he wears a suit jacket over Tibetan attire, contrasting with his long hair and leather riding boots.

But he also stands at another crossroads－one where international cultures intersect.

He was born in India in 1970 and lived there until he relocated to Shangri-La at age 17. He later studied in Austria and the United States. Dakpa Kelden speaks Mandarin, Tibetan, English, Hindi, Urdu and Nepali.

This helps him to realize his mission of guiding people from various places and backgrounds around the scenic settlement named after the paradise British author James Hilton describes in his book, The Lost Horizon. 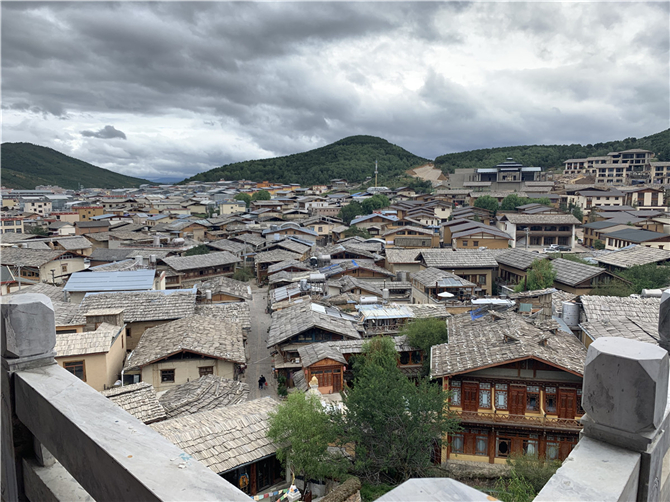 Dakpa Kelden’s hotel is located in the ancient quarter of Dukezong town in Shangri-La, Yunnan province.

Dakpa Kelden started guiding foreigners around Shangri-La’s Tibetan villages and natural landscapes in the 1990s, long before it became a tourism hot spot.

His foreign clients later helped him get to Salzburg, Austria, to study hotel and tourism management, and then to the US to take classes on small-business management.

These experiences not only helped him learn more about other cultures but also his own.

“When I was learning about foreign cultures abroad, I realized how precious my own culture is and became even more interested in knowing more about it,” he says.

He left the US before finishing his studies, but he retained connections with stateside travel agencies.

After he returned to Yunnan in 2001, he began to arrange trips for foreigners to Shangri-La and the nearby Meili Snow Mountains, Lijiang and the Hutiao Gorge in the Yangtze River’s upper reaches.

Dakpa Kelden has honed his formula over the past two decades. He brings travelers to villagers’ homes, enables them to sample local food, and takes them hiking and camping.

His guests, in turn, have taught him lessons, such as the importance of environmental protection. Some Japanese visitors, he says, carry all their garbage with them as they travel.

In addition to his boutique hotels in Shangri-La and Lijiang, Dakpa Kelden has also turned his old residence, a three-story Tibetan-style house surrounded by grassland, into a hostel in partnership with travel writer Zhang Jinpeng.

“I saw the yaks and snowy mountains in the distance from the balcony of the third floor and decided to start the hostel with him,” Zhang recalls. “It reminds me of A Lai’s novel, Settling Dust.” 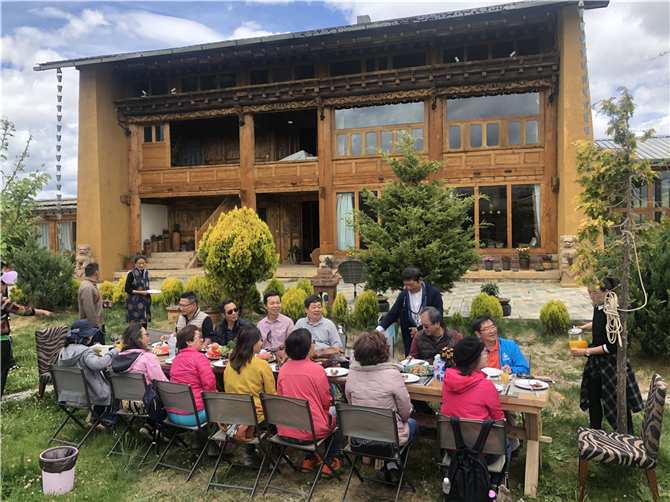 Guests enjoy a meal in the yard of Dakpa Kelden’s home in the countryside of Shangri-La.

Dakpa Kelden, who’s the descendant of a former ladho (muleteer) on the Tea Horse Road, views his hotels as contemporary versions of netsang (lodgings) that dotted the ancient route.

His father told him that relationships between ladho and people running netsang were based on mutual trust. Netsang operators would warn ladho to leave if there were risks, such as robbers or avalanches, even though the lodge owners would lose money when their guests departed.

Dakpa Kelden’s father, who used to spend months traveling between Shangri-La, Lhasa in the Tibet autonomous region and Kalimpong in India in the 1940s, dreamed of becoming a jindha. Jindha were successful caravan operators in charge of regional guilds, whose wealth and status enabled them to make such social contributions as improving business environments, caring for the elderly, and building healthcare facilities and temples.

Dakpa Kelden has made his father’s dream his own.

In 2006, he set up a thangka (Tibetan Buddhist scroll painting) academy. Students of all ages and incomes receive free instruction, meals and accommodation. They can master the skills within four years sufficiently enough to earn a living practicing the art form.

Dakpa Kelden values thangka as carriers of Tibetan culture, religion and architecture, and says they also promote such concepts as environmental protection.

In 2017, he took over a struggling social enterprise dedicated to training local women living in poverty and people with disabilities to earn extra cash by sewing handicrafts.

The 30 or so regular participants keep half of the revenues of most products, says Tsering Drolma, who was devoted to traditional Tibetan culture’s preservation for 13 years before joining Dakpa Kelden in 2017 to run the social enterprise.

Dakpa Kelden plans to continue the business as long as it can make ends meet.

In April, he joined a friend in running a brand called Norlha that sells high-end yak-wool products made by herders in the Gannan Tibetan autonomous prefecture in Gansu province. The goal is to improve their incomes and counter such challenges as grassland degradation, poor harvests and unexpected yak deaths.

Dakpa Kelden says he’s grateful for his major life decisions, including moving to Yunnan with his father in 1987, quitting a civil service position, becoming a tour guide for foreigners in the 1990s, studying abroad and starting his own businesses.

He’s building more boutique hotels along the Tea Horse Road and is planning to revive the traditional woodcarving craft he believes reflects Tibetan people’s depth of thought, creativity and sense of art.

A growing number of carpenters are abandoning the declining trade to work as drivers for tourists.

Dakpa Kelden recalls one foreign guest was so fascinated by the carving that he spent a whole week with practitioners in the 1990s.

Ultimately, he says, he hopes to follow his childhood dream to share the caravan spirit of the ancient trade route－an outlook characterized by trust, cooperation and harmony.