The Tibetan call Qianhu Mountain as "lamudongcuo", which means fairy's thousand lake. Those lakes are dotted in the altitude of from 3900 to 4000 meters and Sanbi Sea and Big Black Sea are the center of them. The lake area covers about 150 square kilometers.

Why is Qianhu Mountain So Special?

Qianhu Mountain also named as Thousands of Lakes Mountain .The Tibetan call Qianhu Mountain as “lamudongcuo”, which means fairy’s thousand lake. Those lakes are dotted in the altitude of from 3900 to 4000 meters and Sanbi Sea and Big Black Sea are the center of them. The lake area covers about 150 square kilometers. These lakes are of various interesting shapes. All around lakes are exuberant original forest, where abundant tall and straight firs and spruces grow livelily and vigorously. Surprisingly, the twisting and mixed roots of rhododendrons have become one of the most famous natural wonders around here.

Where is Qianhu Mountain – Location

Starting from Shangrila City and moving toward south about 50 Kilometers on the Yunnan-Tibet Road, one can get to the Qianhu Mountain (Mountain with thousands lake) in Tuanjie village in Xiao Zhongdian. 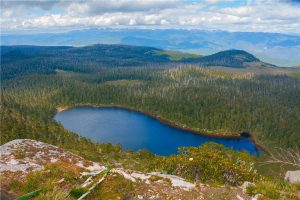 The Origin of Qianhu Mountain
A fairy story goes like this, once a fairy was prinking here, but she broke her mirror by accident, all the fragments fell into the valley then they were changed into numerous lakes. It is perhaps the greatest concentration of alpine lakes in Yunnan with nearly 300 alpine lakes in Qianhu Mountain area, centering on Sanbihai Lake and Daheihai Lake.

The Origin of Jisha Village
Jisha Village is the only way to go up the mountain. “Jisha”is a changed pronunciation of “Jishan” in Tibetan language. “Ji” means water, “Shan” means blood, so“Jishan”means watery blood. It is said that once the King Gesar riding a horse passed by Qianhu Mountain area, seeing such beautiful scenery, the horse was so exited soon one of its hoof print became a magical milk well, if the man drank the water in this well who would have a prolong life. Later, the magistrate Mu knew the news occasionally, so he paid a visit to the well. The local Tibetan people put the chicken blood and goat blood into the well in order to protect this well from being robbed by magistrate Mu. When magistrate Mu saw the water in the well he was so disappointed, and said,”The water is no longer the milk but blood.” Hence this village got its name Jisha Village. At present, there is no milk well any more.

Qianhu Mountain scenic area has a diverse, one-of-a-kind alpine ecosystem which has been so far has been left intact. You can find here Alpine meadows filled with Cuckoos, a unique fir tree forest. You can also find the rare Yellow Cuckoo, Black Neck Cranes, and other rare and precious flora and fauna in the area.

The eco-region is the transition area between Yunnan Plateau and Qinghai-Tibet Plateau with temperate conifer forest (Pinus densata, Pinus armandi) and sclerophyllous forest. The fauna in the sub-unit belongs to the oriental realm; however, many species of the palearctic realm can be found in the sub-unit.

How to Get to Qianhu Mountain?

Tourists can take the shuttle bus to Tiger Leaping Gorge and Lijaing at Shangrila Bus Station and get off at Shaji Village. Another way is to rent a car to. 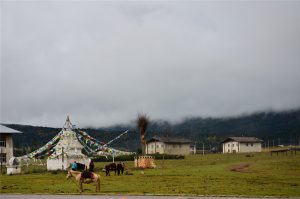 Qiyuhu Lake(祈雨湖)
It is one of the important scenic spot in Qianhu Mountain Area surrounded by verdant forest and stone hills far away, it is so beautiful like a crystal tear reflecting with white clouds and blue sky. It is said that you can’t make much noise here, or it will rain and sleet at any time even in sunny days. Around the lake you can see some hanging bags tied with yellow strings, they are impetrated from the living Buddha, the local Tibetan people used these bags to pray for rain. It is a holy lake for the local Tibetan people, the water in the lake can be used to drink, so you are not allowed to wash in the lake, or trash litter around the lake.

Amazing pillar(神柱)
It is another fantastic place made by nature. When you standing on the top of the pillar you will find that you are the center of the sea of azaleas overlooking Qiyuhu Lake(祈雨湖), Shennvhu Lake(神女湖) and other splendid views.

Dukezhong Ancient Town
Just like the meaning of its name in Tibetan, the “Castle built on Stone”, Dukezong Ancient Town is built on the mountain foot. As one of the largest and best-preserved Tibetan residence groups in China, the 1300-year-old Dukezong Ancient Town, not only plays an important role in the Old Tea – Horse Road, but also serves as a corridor connecting Chinese and Tibetan language, people, religion and cultures.

Songzanlin Monastery
Songzanlin Monastery is the largest Tibetan Buddhist temple complex in Yunnan Province. It is called the Little Potala Palace. In 1993, it was listed as a Key Provincial Protection Unit of Cultural Relics by the government of Yunnan Province. It is said that the Fifth Dalai Lama decided the location though divination and gave the name—Gedansongzanlin. At its height, the monastery housed 2,000 monks. Now about 700 monks live there or around the region. 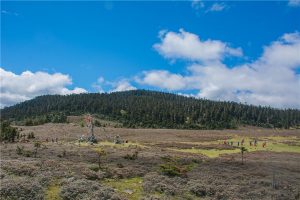 The best travelling seasons are spring and autumn. Every year from May to June, there is the enchanting scenery of the azalea sea, and from September to October, there are colorful forests. July to October is the rainy season with poor road conditions, which is not recommended.

► The temperature of Qianhu Mountain is very low, and with pondings on the road. So a pair of comfortable and water-proof shoes is necessary.
► There is only residence of herdsmen on the mountain, and no shops. Hence, you are suggested to prepare enough food when you visit the Qianhu Mountain.
► Suggest you take a four-hour hiking or horse-riding tour here.
► Qianhu mountain is the god mountain of locals. Don’t shout at the lake. You can drink from the lake, but you can’t wash your hands, feet, sundries, etc. Don’t throw trash at will.
► Tourists have to hire a guide of villagers.