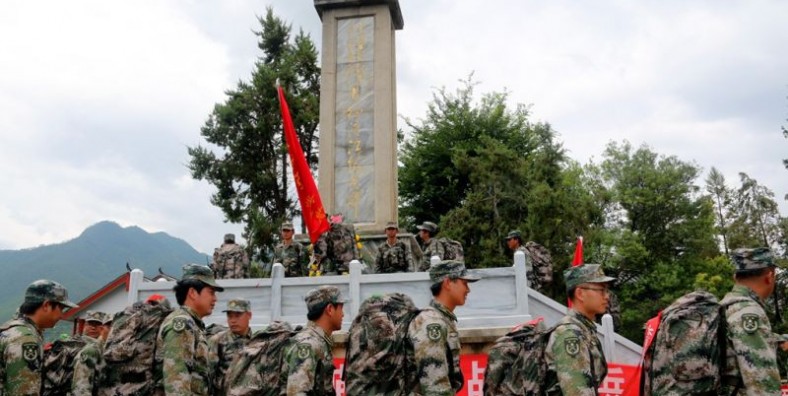 The Red Army’s Long March Memorial Monument is the vital military fortress in Yunnan Province in history situated in the west bank of Jinsha River of the north side of Shigu Town, Yulong County in Lijiang, which is also known as the First Bay of Yangtze River. It is now the key cultural relic protection unit in Yunnan Province. During the second domestic revolutionary war, the second and sixth armies of China’s Workers and Peasants Red Army crossed the Jinsha River to fight the Anti-Japanese War making a glorious and magnificent chapter in history.

In 1935, the Central Red Army arrived in northern Shaanxi and won the decisive victory of a large-scale strategic shift after a long and difficult march. On March 30, 1936, in the course of the strategic shift to Yunnan and Guizhou Province, the second and sixth Red Army received an electric order issued by commander Zhude “crossing Jinsha River northward to fight against Japanese shoulders”. Hence the strategic operation started targeting to fight to cross Jinsha River beginning from Panxian county Guizhou Province.
On April 8, the Red Army’s vanguard fought to cross the Puduhe River, defeating Yunnan Dian Army, and grabbed the iron rope bridge to send the rear guard moving eastward for 10 kilometers. The reds immediately convened an emergency meeting, according to the tight situation forced by the enemy’s four columns, act decisively to abandon the former plan that cross the river from Yuanmou County and Dragon Street instead, they cross the river from Shigu Town, Lijiang Province. On April 11, the Red Army defeated the enemy and captured Fumin.
Helong and Ren zhoushi commanded the second army to arrive at Shigu Town on April 25. On the 26th, the sixth army, led by Xiao Ke and Wang Zhen, took the shortcut from the Jiuhe River to Shigu Town. From then on, eighteen thousand soldiers bravely fought to cross Jinsha River respectively from five main ferries. The sixteenth regiment of the sixth army was finally successfully completed the great Jinsha River Crossing Plan in Judian, which fully demonstrate the superior command ability and extraordinary military art of the Red Army.

In order to commemorate this great historic feat, the People’s Government of Yunnan Province established the Red Army’s Long March Memorial Monument on August 1, 1977, at the end of Shigu street.
The tablet is 8.1 meters high adding the height of the base and 7.1 meters high with the monument only, with a base length of 5.1 meters, which respectively symbolizes the birthday of the Party, the anniversary of the founding of the army and the proletarian regime day. The top of the monument is made of a one-meter-high ceramic red star. The stele is a square reinforced concrete structure with fine grinding of marble around it.
Chairman Mao’s handwriting was intaglioed on the monument with the words “the Second Army of Chinese Workers’ and Peasants’ Red Army Long Marching and Crossing Jinsha River Monument” On the front. On the back of the inscription recorded the glorious history when the Red Army long Marched and succeeded in crossing Jinsha River. Viewed from distance, visitors can appreciate the magnificent scenery of the First Bay of Yangtze River. That’s really exciting. 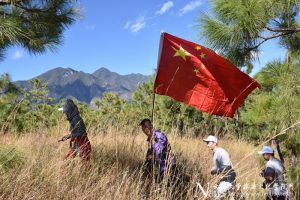 Stone Drum (Shigu) Town is just one of Lijiang’s many landmarks to discover. Usually the recommended time for a visit is about 1-2 hours. So most of the tourists will not choose to stay at Shigu Town for overnight but go back to Lijiang or continue to Shangrila city. You can browse the accommodation part of Lijiang or Shangrila to check the best hotels we recommend for you. Anyhow, there are some Shigu Town local guesthouses introduced to you.

How to get to Shigu Ancient Town

● The temperature difference is big between day and night, especially when it is rain. You should take some thick and long sleaves with you to prevent getting cold. Do not forget to prepare some Cold medicine and intestinal medicine.

●As Lijiang is located on plateau, the ultraviolet (uv) radiation is very strong that you should bring sunhat and sun scream with you.