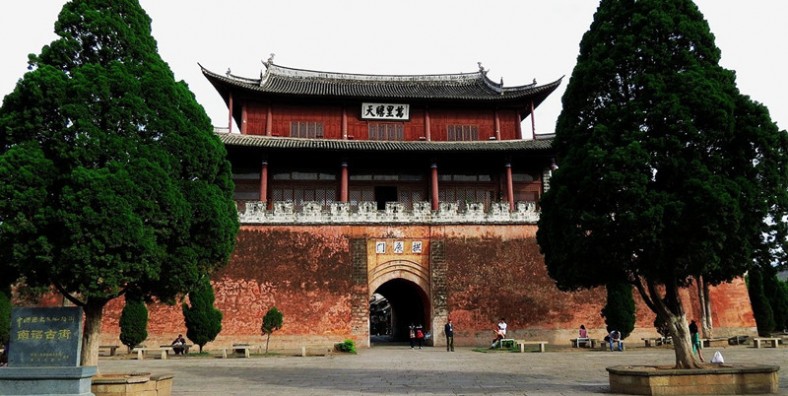 Why is Weishan Ancient Town so special?

Weishan Ancient Town is the birthplace of Nanzhao culture. Center on Gongcheng Tower, the streets in Weishan Old Town present standard grid-beam structure. In total of 25 streets and 18 alleys, the residences in Weishan Ancient Town remain the traditional Chinese construction. Among them, the residences along the principal axis preserve the architectural style and features of Ming and Qing Dynasty. Unsophisticated folk custom, profound culture and favorable climate form the tranquility of Weishan people.

Where is Weishan Ancient Town?

Weishan Ancient Town is located at the foot of Ailao Mountain. It is the important town of Dali City, Yunnan Province.

How to Get to Weishan Ancient Town?

From Xiaguan, the big town just south of Dali ancient town, take a bus from the Southwest bus station (西南站), there is bus every 15 minutes, so you won’t have to wait to long. It’s a one hour drive. Once at the bus station, take a tuk-tuk for 5 RMB to the Weishan Old Town. The driver will drop you at the Gongchen Tower Gate, in the middle of the ancient town.

Weishan Ancient Town retains the layout of chessboard built 600 years ago, which is the best preserved ancient architectural complex of Ming and Qing dynasties.There were villages in Weishan Town in early Tang Dynasty. Duan began to construct the town with clay in Yuan and turned into brick town in Ming Dynasty.It maintains not only the architecture of Ming and Qing, but also the civil structure of Bai’s residence houses.

Weishan is the famous historical and cultural town of China, also the birthplace of Nanzhao culture.It is also the town which keeps the chieftain system longest time. 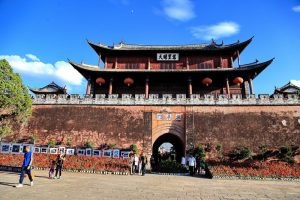 There are four city gate in four directions in Weishan Old Town, which is shaped like a square seal. As the remarkable building in Weishan Old Town, the Xinggong Tower is built in the center in Ming Dynasty. At a height of 11 meters, it consists of timberwork tower and brick foundation support.

The north city tower of Weishan Old Town is called Gongchen Tower with a height of 23.5 meters. The whole building was supported by 28 large pillars. Climbing up from the east or west gate and overlooking, travelers can clearly see the four main streets extending to different directions and the dignified residences.

Majestically standing in the Weishan Old Town, the Xinggong Tower and Gongchen Tower has been the remarkable building. Inside the old town, the folk residences basically remain the traditional Chinese construction style of Ming and Qing Dynasty. Some are ‘Three Square with a Screen Wall’ and some are ‘Quadrangle Dwellings with Five Courtyards’. There are also many ancient buildings existed inside or outside Weishan Old Town, such as Confucius Temple, Wenhua Academy and Yuhuang Pavillion. Some exports praise highly after investigation of Weishan Old Town because of the intact preservation of Ancient Town.

Weibao Mountain is one of 14 famous Taoist Mountains of China, enjoying the most and grandest Taoist monasteries. It is also the national forest park. Weibao Mountain offers lots of tall and straight trees, like a green lion viewing the ancient town and Guajiang River. It collects the charming landscape, original culture of Nanzhao amd Taoist culture.

Yuanjue Temple is hidden in the forest, enjoying the charming scenery. Among pine trees in front of temple stand the tall towers, which are the dense-eave brick tower. The straight trees, tall towers and ancient temple make a peaceful picture. 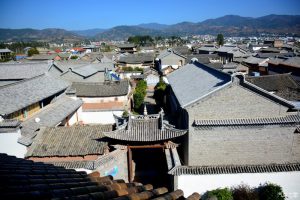 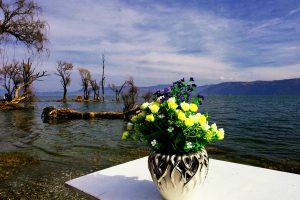 Erhai Lake (Ear-shaped Sea), reputed as “Pearl of Plateau”, is the second largest highland lake of Yunnan. Taking a boat and cycling around the lake are fantastic ways to explore “Silver Cangshan Mountain and Jade Erhai Lake” scenery.

March and April is the best time to visit Weishan Ancient Town, during that time there are a lot of festivals and activities. Lots of festivals and activities of Bai nationality centered on period from March to April every year, traveling during this time tourists can enjoy the full-bodied ethnic customs. Tourists can choose to go during the Third Month Fair (from March 15 to March 21 in lunar calendar, the west of Dali Sanyue Street) and Butterfly Activity (April 15 in lunar calendar in Butterfly Spring).

Before Visit to Weishan Ancient Town

Weishan County is located in the south of Dali and the west of Yunnan Province. Ancient buildings and relics assemble and natural scenery gather here, such as Weibao Mountain, Yuanjue Temple, Weishan Old Town and Weishan Confucius Temple.

The preeminence and quintessence of the Yi’s Dage in Weishan live in its long history, integrated configurations, rich cultural connotations, different values and functions. In Torch Festival, people from all directions gather together and sing around the torch. Moreover, the Dongjing Music enjoys good frame.