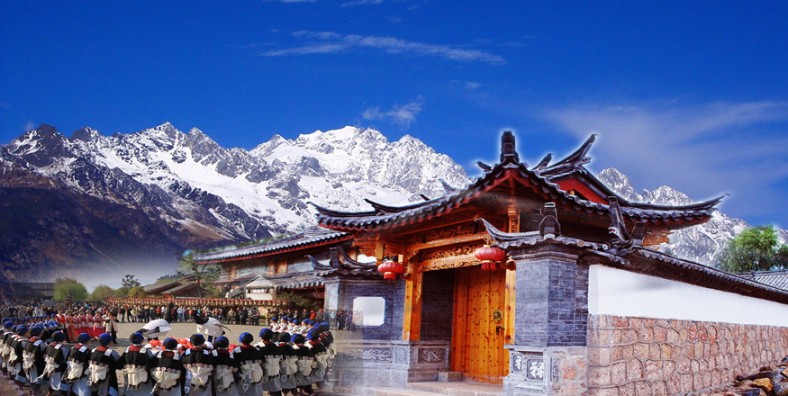 The Baisha Ancient Village is one of the oldest towns in Lijiang City. It got its name “Baisha” meaning “white sand” from the natural white sand in the area. It was the cradle-land of the Tusi Dynasty evolved from the Mu Clan. It was also the earliest settlement of the Naxi people. There are many ancient constructions built in the Ming Dynasty: the Dabaoji Palace, the Liuli Temple and the Wenchang Palace. The well-known Baisha Frescoes are situated in the Dabaoji Palace. 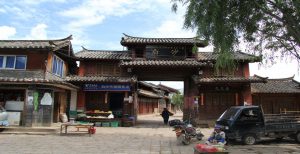 The architectural complex is made of two parts, the folk residence and the cultural sites. The folk residence is called “Peng Shi Zhi” in local language meaning the “White Sand Streets”. All the streets were constructed oriented from north to south. In town center, there is a square at where three avenues intersect. Houses and small stores line up on both sides of the streets. A crystal-clear brook flows around all houses passing the small town from north to south.

As mentioned the Baisha Ancient Town was the cradle of Mu clan. The Mu family was famous for their city planning skills and experience. Early in the Tang Dynasty, once the emperor of the Nanzhao State named the Yulong Snow Mountain “North-Yue”, the ancestors of Mu clan began to construct Baisha Streets and North-Yue Temple in Baisha Ancient Town. These constructions had witnessed the golden age of the Baisha Ancient Town. In the Song Dynasty this town prospered further and became the economic, political and cultural center of the Lijiang City.

Baisha Old Town is the first settlement of Naxi People when they came into Lijiang basin and also the cultural origin, and it is the political center of Lijiang before Yuan Dynasty (1271-1368 A.D.). In the early Ming Dynasty (1368-1644 A.D.), the government in Baisha Old Town built many temples, for example the Liuli Temple, Dabaoji Palace and etc, and thus it was also the religion center of Lijiang in that time. Nowadays, many foreigners are very interested in the Chinese culture and the primitive environment that still kept in Baisha Old Town.

Where is Baisha Old Town

On the foot of Jade Dragon Snow Mountain, Baisha Old Town was located in 10 kilometers north of Lijiang Old Town with Dragon Spring to the south and Zhishan Mountain to the west.

Later in the Ming Dynasty and Qing Dynasty the Mu family migrated to the Dayan town gradually. The central district of the town is characterized by clusters of temples called “Mudu” and a huge square symbolizing the political power and influence of Mu family at the time. Among the remaining ancient architectures, the Fuguo Temple, the Dabaoji Palace, the Liuli Palace and the Dading Pavilion were built during the reign of Tusi offspring of the Mu clan. In the meantime, the Mu people began to channel water from the Yulong Snow Mountain into the town for irrigation and water supply which could be the one of the earliest irrigation engineering works. 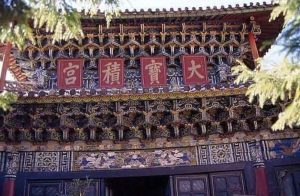 At the end of Baisha Old Street, there is a huge cluster of temples built in the Yongle Period of the Ming Dynasty. It consists of three yards: the Sutra Collection Pavilion that is the dooryard, the Liuli Temple that is the cloister and the Dabaoji Palace that is the backyard. The palace occupies an area of about 73 square meters. Among the 28 fresco groups in the palace, the painting about the Sakyamuni explaining the sutra passages to his disciples is the most famous and valuable one.

These mural paintings of more than 100 statues and tales, with their fine line, smooth carvings, rich colors, vivid pattern and harmonious composition amazingly lively presented religious tales and activities of Taoism, Buddhism and Tibetan Buddhism. They are valuable treasures of Chinese painting history and cultural heritage. The frescos were created by Han artists in collaboration with Tibetan artists; they thoroughly demonstrated superb artistic skills and creativity.

The Dading Pavilion, about 10 meters away from the Dabaoji Palace, is dated back to the Wanli period of the Ming Dynasty (1572 AD). The 16 well-preserved mural paintings in the Dading Pavilion were created in the Qing Dynasty. Compared to those in the Dabaoji Palace, these paintings have beautiful shapes, bright color and precise lines creating strong visual impacts and sensation. It is also valuable national treasure and cultural inheritance.

The 44 pieces of Baisha frescos were carved in the early Ming Dynasty. Most of the paintings depict religious stories of Taoism, Buddhism and Tibetan Buddhism. The mural embodies the artistic characteristics of Naxi, Tibetan, Han and Bai ethnic groups. Among them the paintings of Kwan-yin and Sakyamuni are the most famous ones. Now Baisha Frescos, also known as Lijing Frescos have become precious data for studying history of Chinese arts and religions.

Wandering around the Baisha Village, you can enjoy the slow lifestyle of the Naxi People and their friendly smiling faces; see happy and satisfied travelers as well as better scenery than that of Lijiang. You can freely enter various courtyards to see the beautiful and man-made tie-dye artwork hanging for sale or drying in the sun. If you are interested in this artwork, the local small Embroidery School of the Mu Family is worth visiting. There you can admire the local national and traditional embroidery, different from ordinary Chinese embroideries such as the Su Embroidery. A few art stores and hostels, run by local people, are scattered around the Baisha Village.

Heading for this village, the Baisha Murals cannot be missed. These Murals are representative of Lijiang Murals and their creation took about three hundred years, from the early Ming Dynasty to the Qing Dynasty (1644 – 1911). The paintings were finished by Han, Tibetan and Naxi painters as well as painters from other nationalities, so they are not a symbol of Naxi Culture but a fusion of art from different nationalities. The peak of the Lijiang Murals was at end of the Ming Dynasty. Now only 55 pieces of murals are preserved in religious sites around Lijiang Town.

Most of the existing murals are preserved in Dabaoji Palace, a temple built in 1582. Twelve pieces of murals with 167 different figures are painted on the wall with religion as their main theme. The figures of Buddha, the Four Heavenly Kings as well as daily life scenes, plants and animals are included and reflect the combination of several religions and different cultures. The Liuli Palace contains 16 pieces of murals, mainly with figures from Buddhism.

If you are interested in the Buddhist culture, especially Tibetan Buddhism, Fuguo Temple ruins can be included in the itinerary. Baisha Village keeps the Fuguo Temple ruins although the temple is now located in the Black Dragon Pool Park in Lijiang for the convenience of visitors. Being the ‘Mother Temple’ for Lijiang, the ruins here record not only the history of Lijiang’s temples, but also the Tibetan Buddhism and Naxi cultures.

Distances from Others Scenic Area:

How to Get in Baisha Ancient Town

•By Taxi: you can take taxi in the downtown of Lijiang and the round ticket is about CNY 40.

•By Bus: you can take bus No.6 to Baisha Road and then walk into the old town.

•By Bike: about 12 kilometers from Lijiang Old Town to Baisha Old Town by bike. 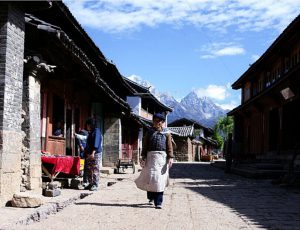 The best time to visit is from April to October because the scenery at that time is charming. During March to August, various flowers put forth their blossoms. In Spring time, travelers should pay attention to prevent fire and sunburn because of the windy and dry weather. In Summer, the temperature is high and rainy season comes. In Fall, the favorable temperature, colorful trees and flowers add more charm. In winter, The weather is sunny in the day time and cold at night.

Baisha is the oldest and most primitive of the three ancient towns in Lijiang(other two are Lijiang Old Town and Shuhe Old Town). Recent years, there are many inns sprouting in the town, ranging from ordinary inns to high-end holiday clubs. Here we recommended some hotels and inns for your reference.

If you want to witness the authentic life of the Naxi People and appreciate their culture, but are tired of overcrowded Lijiang and Shuhe Ancient Town, then Baisha Old Town is the place to go. Here we have prepared some day tour packages with Baisha Old Town, as well as some Lijiang city tour packages and Yunnan Tour packages for your reference.

The local festival is on the twelfth day of the first month of the lunar calendar. On this day, halls on the village’s east street will be open for sacrifices to the Gods and different people in Lijiang will gather in Baisha Village. If you are intrigued by the local traditional culture, the festival time is the best time to go.

Several cafes and many Naxi cuisine restaurants can easily be found at Baisha. The Here Restaurant serves western food and its pizzas are well-known.

Local explanations for the murals are rather limited, so you might like to gather information beforehand or hire a local guide if you wish to be fully informed about the murals.