Why is Banguo Earth Forest So Special 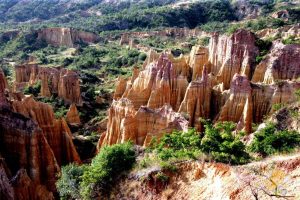 There is a wide Dashahe River(大沙河) in the middle of the Banguo Earth Forest. There are a series of laterally extending tributaries and gullies on both sides of the river. It seems that a row of august warriors are at a stalemate in the two armies, and it also seems to welcome the visitors from away to the desert world. Entering into the narrow gullies, there are spacious racecourse and parade ground. Along the edge of the steep slope of the surrounding, the soil columns are dense with all kinds of shapes, such as large-scale ancient building groups, the pagodas of Southeast Asia, Gothic-style ancient castles, ancient Egyptian sphinx, European Gothic-style ancient castle, ancient Egyptian sphinx, ancient Roman cathedral, Tibet’s Potala Palace, the Palace Museum’s Panlongzhu.

Where is Banguo Earth Forest

There are no direct vehicles to enter into the Banguo Earth Forest. Therefore, visitors can get there by chartering cars or self-driving.

In the early Quaternary period-1.5 million years ago, there are many rivers and dense lakes, dense forests and numerous animals in Yuanmou Area with mild climate and abundant food. It is a paradise for the ancestors of the “Yuanmou Men”. With the passage of time, it had undergone enormous changes. The mud, sand and gravel brought by the rivers filled the lakes, destroyed the forests and ancient tribes, and buried some ancient humans, ancient creatures and ancient cultural sites. Afterwards, the neotectonic movement made the gentle river and lake strata uplift into hills and hillocks, and gradually developed the crust of weathering. At that time, Yuanmou had undergone strong sunshine, concentrated rainfall, obvious dry and rainy seasons, hot summers. The power of nature created the unique style of Banguo Earth Forest. The natural engraver slowly carved the stratum into shapes such as dragon pillars, palaces, temples, castles, figures, birds and beasts, and kept them. The ancient wonders of the earth forest have finally been achieved, forming a community of earth forests in the Yuanmou, which is rare in the world. 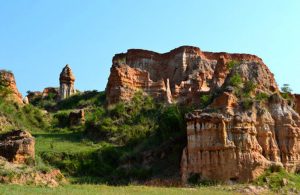 It is the best time to visit Banguo Earth Forest from November to March of the following year. Because it is the dry season, the road condition is better and the climate is warm.

Wumao Earth Forest
Wumao Earth Forest, also known as Laohutan Earth Forest. It is about 36km from the downtown of Yuanmou County. The unique landscape was formed by geological movement and soil erosion one or two million years ago. It is named for its shape like immense forest and the main composition of the expansion is earth. There are four main styles columns : earth pillar style, castle style, bamboo shoot style and mushroom style.