With dramatic cliffs up to 1,000 m (3,280 ft) high and its narrowest part only 10 m (3.3 ft) wide, the huge biodiversity of Birang Grand Canyon has made it a part of a World Heritage Site. Various terrain veins and foldings form a natural cliff painting.

Why is Birang Grand Canyon So Special?

With dramatic cliffs up to 1,000 m (3,280 ft) high and its narrowest part only 10 m (3.3 ft) wide, the huge biodiversity of Birang Grand Canyon has made it a part of a World Heritage Site. It is said that the Blue Moon Valley described in the book Lost Horizon is within this scenic area. Clouded in water mist and fogs, it appears to be a mysterious superlunary fairyland in which one will additionally experience romantic adventure.

Where is Birang Grand Canyon – Location

The Shangri-La Canyon also Grand Birang Canyon is located at the foot of Minor Snow Mountian in Geza township, about 103 KM from Shangri-La.

The scenery of the Birang valley amazes many people. The plant research groups from China and Sweden call it a mysterious valley. The valley is steep and narrow, with walls of some 1,000 meters high, the most narrow part of the canyon is only 10 meters between the two sides. As a saying goes that a sky chasm is produced by a narrow line in between the valley and stones are the gates of the two-mountain valley. The Birang River roars along the Birang Valley with rough waves and roaring noises. The valley has cut itself to a depth of 200 to 1,000 meters, passing through the fairytale land in 2.5 km forming up a marvelous spectacle full of legendary spirits and secluded spot. 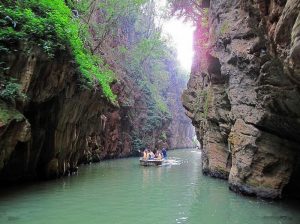 Due to the heavy snow blocked the road into mountain, the shuttle buses are canceled in November each year. But we can ride a horse to go, and the price is negotiable.

December to October are the best traveling time. Tibetan people celebrate their festival on 15th December of the lunar calendar in front of ChituXianrendong Cave.

It is impossible to see all the Shangri-La Canyon Groups when you travel to Diqing. But the main scenery you have experienced when you walk into Birang Grand Canyon.

Chituxianrendong Cave(赤土仙人洞)
It is the biggest karst cave of Shangrila. It is an amazing scene that a clear footprint was on the cliff in front of the cave. 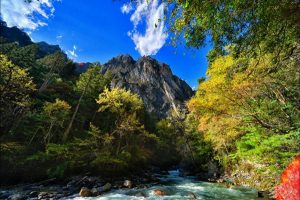 Shout Spring(喊泉)
Next to Chituxianrendong cave there is a fountain, named “Shout Spring”(喊泉), if you shout in front of the cave, the spring water will flow out. It is sweet and healing.

Nagela Temple(那格拉)
In addition, a Tibetan Buddhism temple named “Nagela(那格拉)” was built in the Canyon, both Lama monks and nuns were lived here, however, it was burnt down in 1937, and didn’t get repaired yet. If you keep an eye on the cliff you will see the cliff paintings indistinctly. Some experts believed that it’s a symbol left by the ancient people when migrated, it was hard to understand the meaning inside.

The Top 10 Most Beautiful Grand Canyon in China

Bala Gezong Grand Canyon
As one of the core scenic area of “three parallel rivers”, Balagezong Scenic Spot located about 31 miles northwest of Shangri-la County, is appointed as one of the national parks in the greater Shangri-La area. Vertical perspective view of the topography and the climate is very prominent, which almost inclusive all the modern natural vertical type with three-dimensional ecological and landscape resources of Northwest Yunnan “Three Parallel Rivers” World Natural Heritage.

One thought on “Birang Grand Canyon in Shangri La, Diqing”