The waterfall leaps down over a 46-meter-high precipice at the outlet of the Dayinjiang River, 1.5 kilometres away in the west of the county town, diffusing vapour all around. In sunshine, a rainbow rises from among the steaming vapour. There is an inscription of four Chinese characters – Jian Sao Feng Yan, carved on a cliff beside the waterfall, in which the calligrapher compared the waterfall to “a sword that sweeps away the dense miasma”. Arching the river before it leaps down is the famous Taijiqiao Bridge constructed by Zhang Wenguang, the leader of the Tengyue uprising in 1911 responding to Dr. Sun Yat-sen’s call.

Dieshuihe Waterfall and Taijiqiao Bridge,TengchongWater of Dayingjiang river flows across Tengchong Bazi from north to south and suddenly falls down from the huge fault cliff and forms the grand waterfalls. Above the momentous waterfalls there’s a Taiji stone bridge built by governor of west Yunnan ZhangWenguang in September of the second year of Republic of China.

Li Yuanhong, President of Northern Warlords government wrote three Chinese characters—Longguangtai. There are many caved stones in the yard, most of which are excellent works of celebrities and scholars. The famous ones include a 206-character couplet written by Jinshi (successful candidate in the highest imperial examination held in the palace under the emperor’s supervision) of the Qing dynasty, Jun people—Cunkaitai.

Standing in the water-viewing balcony, enjoying the landscape, reading the long couplet and reviewing the history of important town—Tengchong, it may arouse your poetic mood and exuberant spirit. 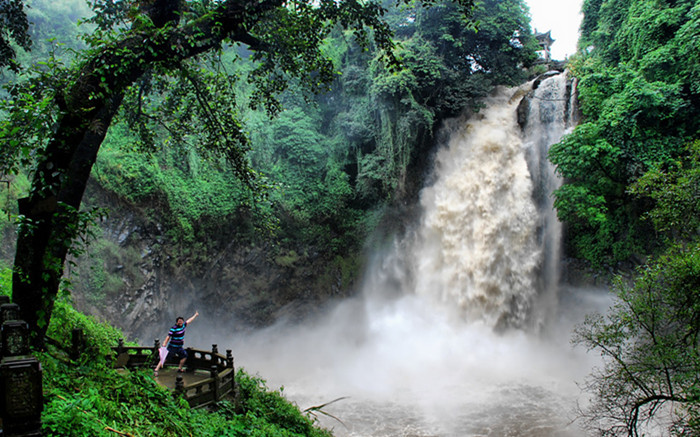