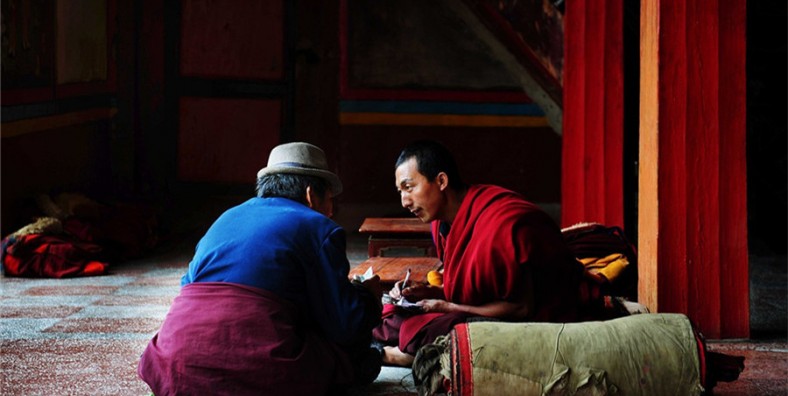 Built in 1667 and located in Benzilan Town of Deqin, Dongzhulin Monastery is the largest one of the three Gelu Sect monasteries in Deqin County and one of the religious cultural activity centers in Kangnan District. With orderly-distributing architecture complex, the lofty monastery can be mistakenly deemed a town when looked from the distance.

Why is Dongzhulin Monastery So Special?

Dongzhulin Monastery is the largest one of the three Gelu Sect monasteries in Deqin County and one of the religious cultural activity centers in Kangnan District. The housed treasures include gilded Maitreya , statue of White Drolma, Buddhas of Three Worlds, the ruler of the hell, Manjusri,  18 Arhats statues and Tangkar scroll paintings depicting Buddhist stories. There are also a great number of Buddhist stupas and religious instruments and props, being a Buddhist cultural treasure house for the pilgrims.

Where is Dongzhulin Monastery – Location

Dongzhulin Monastery is located in Benzilan Town of Deqin County, 105 kilometers away from Shangri-La City. It is about 150.2 km to Tiger Leaping Gorge, 119.1 km to White Water Terraces, and 37.9 km to Shika Snow Mountain. With an altitude of 3,000 meters above the sea level, the monastery is geographically located in the low area in the back of Baimang Snow Mountain. With orderly-distributing architecture complex, the lofty monastery can be mistakenly deemed a town when looked from the distance.

Dongzhulin Monastery was built in 1667, the 6th year during the reign of Emperor Kang Xi of Qing Dynasty and named “Chong-Chong-Gang Monastery” previously that means a monastery by a crane lake. It was a Kagyupa tradition monastery, and converted to Gelupa and merged with other 7 small monasteries, then becoming Dongzhulin Monastery. In the late Qing Dynasty, there had been over 700 lamas and 10 Living Buddhas in this monastery.

Dongzhulin is not as famous as Songzanlin, but more popular with the local Tibetans. During the Cultural Revolution it was destroyed and the restoration was worked out in 1985. It has several “living” Buddhas and each year the Mask Dancing Ceremony attracts thousands of followers. 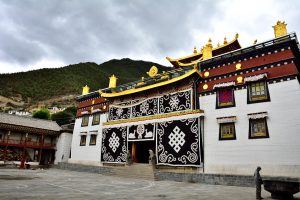 The Assembly Hall of Dongzhulin Monastery is designed in earth and wooden structure with 4 floors and 82 thick pillars. On the first floor, Tsongkhapa and his two disciples named Damarenqing and Kezhujie are enshrined. Some other enshrined Buddhism deities on the same floor are Sakyamuni, Avalokitecvara (Goddess of Mercy), Bhodisattva Manjusri, Bhodisattva Samantabhadra and Drolma. The 2nd and 3rd floors mainly serve as chanting hall, Buddhist chapels and chambers for pilgrims. Each floor is magnificently decorated.

The monastery also enshrines a 6.8 meter high, gilded bronze, statue of seated Buddha of Qiangba(Maitreya), and a 10.5 meter tall statue of Sakyamuni, gifts from the Sera Monastery in Lhasa. It also houses a huge Tangkar, which is 8.5 meters long and 5.2 meters wide, and is mostly unfolded on the Gedong Festival. 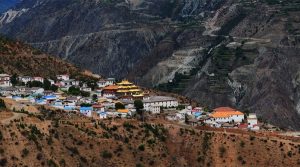 There are buses running from Shangrila to Deqin, tourists can take off at the Dongzhulin Monastery.

Renting a car to Dongzhulin Monastery from Shangrila is also available.

Rich in animal and plant resources, Baimang Snow Mountain is recognized as a “Kingdom of Animals and Plants in a Cold Temperate Mountain”. In the region, there are 10 kinds of plants under special state protection, such as Circaeaster agrestis and Pseudotsuga forrestii Craib, and more than 10 kinds of animals under special state protection, such as Yunnan snub-nosed monkeys, clouded leopards and lesser pandas.

►Walk the chalks. No smoking, No noise-making, No pointing or touching the statue of Buddha and Dharma in the Monastery.

►It’s better to get there by car-rental due to fewer buses available.