In 2008,from November 17 to 20, Xi Jinping(习近平),then Member of the Standing Committee of the Political Bureau of the CPC Central Committee, member of the Secretariat of the Central Committee and Vice President of China,had did research in Yunnan province.On 18 November,Xi Jinping（习近平） came to Simao district of Puer city（普洱市思茅区） to understand the situation of tea-growing. It shows that President Xi’s great bosom of caring about people and feeling the suffering of them. The deep concern of President Xi for the people became a promise, he said “I promise I’ll come again,I wish all of you’ll live a batter life at that time.” Afterwards,people called the road which President Xi get by as”Dream of The Road（梦之路）”.

The Dream of The Road（梦之路） is at the right side of the Ask Teahouse（问茶楼）, it is a tourist trail in the ten-thousand mu tea garden which was paved with red brick.The Yunnan big leaf species tea（云南大叶种茶） were planted on both sides of the road, Yunnan（云南）’s favorable natural condition cultivates high yield and outstanding quality big leaf species tea. The tea is sprout early, Yukon bud force,long growing period,bud leaf fat and soft, it is the special raw material for Pu’er Tea（普洱茶）.We can say Pu’er Tea（普洱茶） has obvious geographic feature.It is a tea made of Shaiqinmao tea leaves of Yunnan big leaves species（云南大叶种晒青茶） treated by fermenting process which different from black tea and green tea.Pu’er tea（普洱茶） leaves are fat and stick, it has a black or red-brown color shape, and its soup is clear with red color, has a special fragrant smell and pure and sweet flavor.Pu’er tea（普洱茶） is a suitable beverage for all ages. Many literati in Chinese dynasties chant poems and praise it,Zhao xuemin（赵学敏） of qing dynasty said “Pu’er tea fragrance is unique, wake up wine first, eliminate food and dissipate phlegm, clear stomach and Jin, especially big kilometers(普洱茶清香独绝也，醒酒第一，消食化痰，清胃生津，公里尤大也。).Brahma Lu Series,written by Cai E in 1925 A.D《梵天卢丛录)(柴萼，著于公元1925年)”Pu’er tea is warm and fragrant, which can cure all kinds of diseases. It is steamed and wrapped in bamboo balls, its price is the same as gold(普洱茶，性温味香，治百病，蒸制以竹篛成团裹，价等兼金。).

Pu’er tea as a traditional beverage, also has a special medical effect in addition to the quench thirst and refresh oneself. Cao Xueqin（曹雪芹）’s Dream of Red Mansion（红楼梦） also describes drinking Yunnan Pu’er tea.Even Emperor Qianlong（乾隆） used to write poems and recite Pu’er tea（普洱茶）: “the Pu’er tea（普洱茶） is unique, and the Qing Dynasty is not full of sparrow tongue.” Point into a bowl of golden stem dew, Pinquan Lu Yu should be ashamed. “(独有普洱号刚坚，清标未足夸雀舌。点成一碗金茎露，品泉陆羽应惭拙。) 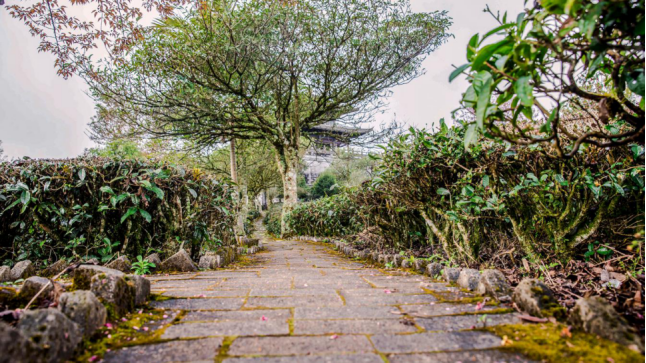 (3) The best shooting position: the step of the exit of Dream of The Road(梦之路)

(5) the best shooting position description:Dream of the Road（梦之路） is a rugged path shuttled between the tea plantations, although it is a scene, it is difficult to get a full picture of it unless you are using aerial photography.Of course, in the exit step position to shoot the path and the surrounding tea garden scenery, the effect is still good.