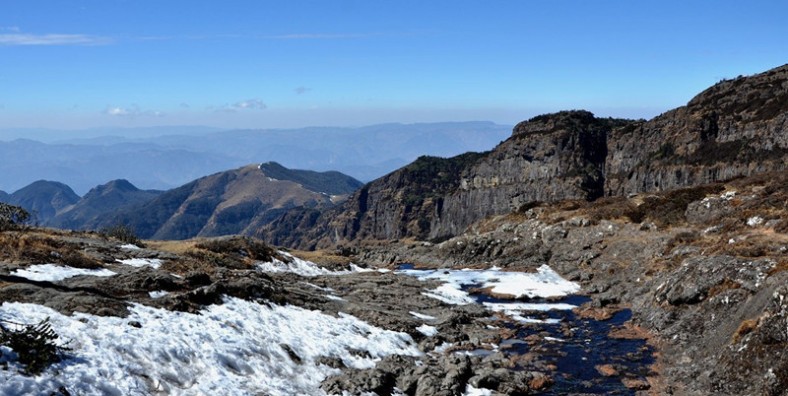 Why is Jiaozi Snow Mountain so special?

In winter and spring, the mountain is covered with pure white snow, with beautiful icefalls hanging from cliffs. In summer and autumn, the fragrant azalea flowers are in full blossom with bees humming and butterflies dancing around. In one word, scenery in the Jiaozi Snow Mountain is extraordinary. Enchanting lakes, magnificent waterfalls, attractive cloud sea, charming sunset, exuberant meadows, and beautiful azalea flowers will make you feel like you are stepping into a fairy tale world. 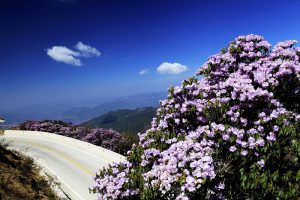 The History of Jiaozi Snow Mountain

Unlike so many places in Yunnan, Jiaozi Snow Mountain does not contain any ancient shrines or picturesque villages built centuries ago. It is a decidedly natural place, and views from its soaring peaks reveal lesser summits, green with forests or terraced farmland, rolling away to the horizon.

The area has been known as a scenic spot for centuries. More than eleven centuries ago, Yunnan was ruled by a small kingdom independent of Chinese imperial rule called Nanzhao. The sixth ruler of this fiefdom, Yi Mouxun (异牟寻), placed special significance on five mountains in his realm, declaring them the most beautiful. They included peaks called Jizu, Gaoligong, Cangshan, Wuliang, Jade Dragon and Jiaozi — the last of which the king named himself.

The area where Jiaozi Mountain sits has long been inhabited by people of the Yi minority. They are the largest ethnic population in Yunnan, known for a vibrant culture that features bullfighting in some parts fo the province, as well as the fiery Torch Festival. Tribes of Yi have called the slopes of Jiaozi Mountain home for at least 2,000 years.

The spectacular cliffs and bluffs making up Jiaozi Mountain were formed by volcanos pushing up through a shallow see hundreds of millions of years ago. Today the basalt rock formations — created long ago by lava flows — nurture a wide variety of plants and, in turn, wildlife. 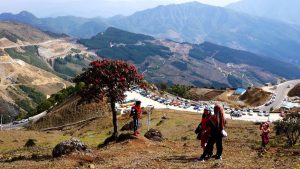 The forests of Jiaozi Snow Mountain are composed of all types of pine and other evergreens, but the azalea trees are the main attraction. There are more than 30 different species, each with its own unique and dazzling flowers. The largest type of azalea on the mountain grows up to 12 meters high and has blossoms ten centimeters wide.

These woods are home to musk deer, long-legged goral, pangolin, pine martens and other medium-sized mammals. The area also contains numerous bird species, including hawks, eagles, and the spectacular Lady Amherst’s Pheasant and Crimson-bellied Tragopan. While encounters with these animals are somewhat rare, sightings by tourists are not unheard of. Happy hunting!

There is no particularly bad time to visit the mountain, it just depends on your preference. Snow usually begins to accumulate in November, and by mid-winter, the trees and ground are often completely covered by fluffy white banks of snow. Temperatures during this time can dip well below freezing and the wind can be intense. Make sure to dress accordingly.

The springtime thaw starts in earnest around March, and at this time the slopes of the mountain burst into color as the meadows and forests bloom with spectacular, multi-colored flowers. This is followed by the rainy season, so pack a waterproof jacket and be prepared for periods of thick and ghostly fog. From August to October is the dry season, a time of endlessly temperate, cloud-free days and nights punctuated by gorgeous star-lit skies.

The best time to appreciate the mountain veiled by white snow is from late November to March, when the mountain becomes a white beauty. Rivers are frozen. The tree branches are coated white, the grassland is hidden by the huge white carpet of snow. Animals are having a good rest in their caves. It is so tranquil and peaceful. 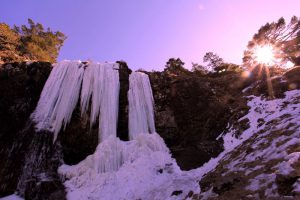 What to See in Jiaozi Snow Mountain?

Heavenly Lake: Ringed with rocks and crystal clear, Heavenly Pond sits at an elevation of 4,150 meters. Viewed by the Yi people as a holy place, the pond bottom drops off to an astonishing 200 meters in some spots.

Waterfall Path: A series of different cascades, several of them 30 meters or taller. Each is surrounded by lush vegetation in during the warmer months and frozen solid into magnificent shapes during the winter.

Moon-shaped Cliff: A gently bowing and imposing line of cliffs. The rock formations are impressive, as is the marked change between alpine forest and highland meadow that takes place at the bluff’s edge.

Azalea Forest: An endless stand of enormous azaleas stretches across this part of the mountain. When in bloom, these trees are perhaps the most colorful part of the entire Jiaozi Snow Mountain experience.

Icefalls: Another highlight of a winter visit to Jiaozi Snow Mountain is icefalls. Seen from afar, they are like white marble sculptures differing in thousands of ways, which will take away the breath of tourists. On warm spring days, these icefalls melt and become waterfalls cascading down the mountain, which looks splendid and fascinating as well. The falls are mainly distributed at an altitude of 8,202 feet (2,500 meters) to 13,123 feet (4,000 meters), including the Double Waterfalls at the Heroes’ Slope, the Sisters Waterfall, the Flower Stream Waterfall, the waterfall at the Water Dripping Rock, the Lotus Waterfall, and the Flown-over Waterfall.

The Summit: The high point, both literally and figuratively, of a climb up Jiaozi Mountain. The peak has a sitting area where visitors can look out for dozens of kilometers in every direction and savor the accomplishment of reaching the top.

What to Do in Jiaozi Snow Moutain?

Sleeping under the stars is an option at a dedicated campsite inside the entrance gate — the Sifangjing Visitor’s Center (四方景游客服务中心). It is free if you have your own gear. If not, a two-person tent costs 79 yuan per night. No fires — wood-burning or camp stove — are allowed.

The area where Jiaozi Mountain sits has long been inhabited by people of the Yi minority. They are the largest ethnic population in Yunnan, known for a vibrant culture that features bullfighting in some parts fo the province, as well as the fiery Torch Festival. Tribes of Yi have called the slopes of Jiaozi Mountain home for at least 2,000 years.

It is also considered one of the best places in the country to see the sun rise and set, no matter the season. 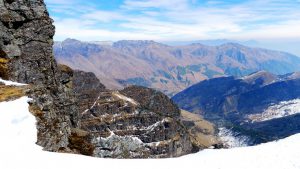 Shuju is one of three major ferries on the Jinsha River (the Yangtz River) when the Red Army passed through Yunnan Province during the Long March in the 1930s. The Memorial Hall is situated in Shuju Village of Buke Town, Dongchuan District of Kunming, covering an area of only 268 square meters but housing over 60 items of relics left behind by the Red Army. As the former command post of the 9th legion of the Red Army in May 1925, the memorial hall was listed as a key historical and cultural site of Yunnan Province and upgraded into a museum in June 2007.

Damakan, a viewpoint some 9km away from 109 along a bumpy dirt-track, is one of the photographers’ favourites. Just when the light is coming out, the small village several hundred meters below is getting busy and smoke starts rising from the farm-houses smokestacks. As the farmers are starting their working day, the photographers’ morning shift is almost over.

For those with cars or who are willing to pay a private driver, the road trip from Yunnan’s capital city of Kunming usually takes between three and four hours, depending on traffic. Cars should use the Jiaozi Mountain Dedicated Tourist Road (轿子山旅游专线). Hiring a car for up to four people for a one-day round-trip journey will cost roughly 1,000 yuan, including meals for the driver.

There are three possibilities to get from Kunming to Jiaozi Snow Mountain by bus.
Option One: Chartered vehicles leave daily from the east gate of the Kunming International Convention and Exhibition Center at 7:30am and return at 4:30pm. A one-way ticket costs 60 yuan.
Option Two: A second choice is the bus leaving from the Yunnan Railway Museum in central Kunming. It departs at 8am and returns at 4pm. The cost for a ticket is also 60 yuan.

The Third Alternative: Hop a bus from Kunming’s North Bus Station. This public option departs hourly between 6:20am and 4:40pm. Tickets run 40 yuan per person.
Please note: This option will not drop you at the main entrance to Jiaozi Snow Mountain. Instead, it stops at the Zhuanlong Bus Station, which is 40 kilometers south of the mountain.

From the town’s bus station, you will need to pay a further 30 yuan for a bus the rest of the way and they do not run on the weekends. If you arrive on Saturday or Sunday, instead grab a seat in a private taxi. The last leg of the journey should cost between 30 and 50 yuan per seat depending on how well you bargain.

1. The temperature fluctuates extremely between day and night and due to the rise of elevation on the mountain. It may be sunny during the daytime and at the foot of the mountain, but windy and cold at night or on mountain top. So, you are advised to prepare enough clothes. In addition, you should apply moisturizer and sunscreen cream for your exposed skin, and wear a pair of sunglasses in winter because the snow is quite dazzling.

2. Climbing the Jiaozi Mountain is energy-consuming, so you need to take enough food and water.