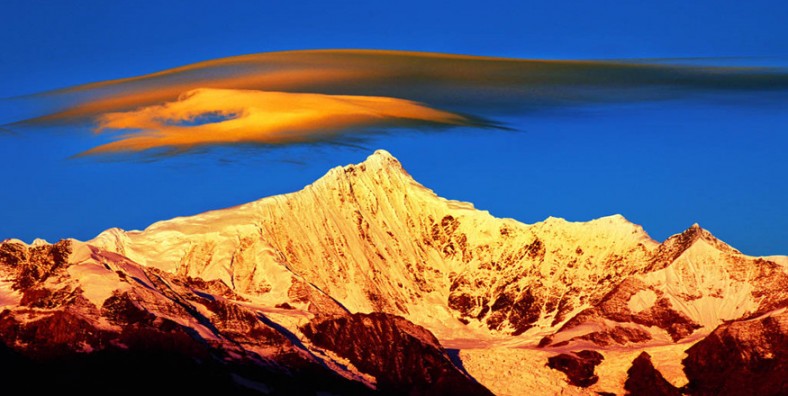 In the scroll of Tibetan classics, the 13 peaks of Meili Snow Mountain are regarded as "immortals practicing in the palace of the prince", especially the main peak Kawagebo, honored as "the top of the eight sacred mountains of Tibetan Buddhism".

Meili Snow Mountain is one of the most sacred mountains of Tibetan Buddhism. In the 1930s, they were praised by American scholars as the most beautiful mountains in the world. Meili Snow Mountain boasts numerous snow-clad ridges and peaks, thirteen of which are more than 6,000 meters above the sea level. In the scroll of Tibetan classics, the 13 peaks of more than 6000 meters are regarded as “immortals practicing in the palace of the prince”, especially the main peak Kawagebo, honored as “the top of the eight sacred mountains of Tibetan Buddhism”.

From north to south: 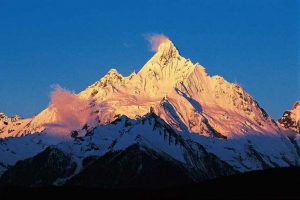 Also called Shennv peak, it is a summit in the Meili Snow Mountain of Yunnan province, China. At 6,054 metres, it is the fourth highest peak in the range (after Kawagebo, Cogar Laka and Nairi Denka), and is located at the southern end of the range. It is regarded as one of the world’s most beautiful mountains.

Mianzimu, means “Sea Goddess” in Tibetan, who is said to be the wife of Kawagebo. There is also a local saying that it is believed to be the daughter of Yulong Snow Mountain. Perhaps because the goddess prefers flowers, nature dresses more flowers at the foot of the peak, patches of alpine rhododendrons in bloom making the peak more enchanting.

It means “the first of the five Buddhas” in Tibetan language, which is called “headless devil peak” in Tibet. It is so named due to the five flat, sharp snow-capped peaks standing side by side just like the crown of Buddha. It is located on the north side of Mianzimu Peak. Standing 5470.5 meters above sea level and covering about 10 square kilometers with snow all year round. 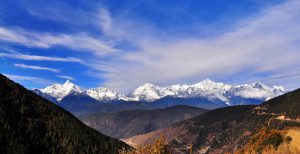 Bujiong means “little son” in Tibetan language, who is said to be the son of Kawagebo and Mianzimu. At 6,000 meters above sea level, it stands between Jiawaren-an Peak and Kawagebo Peak, magnificent. The two big ice falls separately on its south and north slopes are very spectacular.

Also known as the “hero daughter peak” or the “general peak”, it is round and full, with an altitude of 6000.1 meters. 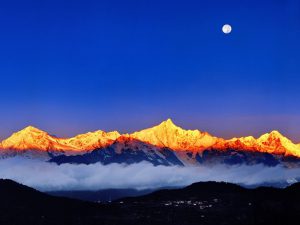 The highest peak Kawagebo, which rises to 6,740 metres, has never been summited. It is the highest mountain in the Chinese province of Yunnan. Kawagarbo is one of the most sacred peaks in the Tibetan world and is often referred to as Nyainqênkawagarbo to show its sacredness.

Shuolazanguimianbu means “the fiercest red face god in the cypress mountain” in Tibetan language, also called “Buqiongsongjiwuxue(布穷松吉吾学)”. Legend has it that he was a guard at the far north. In Tibetan, “shuo” refers to cypress, “la” refers to mountain, “zangui” refers to cruel god and “Mianbu” refers to red. This is very consistent with the natural geographical features of the mountain: the bedrock of the mountain is purple sandstone, so it is dark fuchsia. The mountain has a complex and changeable climate. In summer, there is snow flying and the wind speeding. The mountain’s alpine shrubs and fir forests grow in abundance.

On the south side of the mountain, it is a traffic artery connecting Deqin of Yunnan with Zuogong and Chayu in Tibet, which is one of the important passageways of “tea-horse trade” with cultural implication and connotation. Every year in the summer and autumn, there are endless stream of horses, traders, pilgrims and farmers. It’s 5,295 meters above sea level. 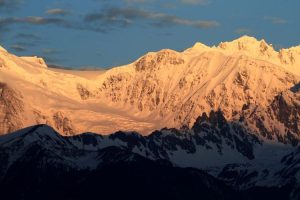 Also translated into Zhaduiwuxue(扎堆吾学), Mabingzhaduiwuxue(马兵扎堆吾学), Mabingzhalawangdui(玛兵扎拉旺堆), it’s also called general peak, black head general and invincible god against the demon. At 6,365 meters above sea level, the Tibetan meaning is “invincible god against the demon”. Legend has it that he is a patron saint at the northeast of Kawagebo peak.

At 6,379 m above sea level, it means “holy mountain top” in Tibetan. The local people said that it is a hat put aside by Zhandiwuxiu(沾迪吾修).

At 5,993 meters above sea level, it means the peak above the round lake in Tibetan language. It is located above the cirque of Siqia glacier. The mountain is shaped like the claws of a black bear.