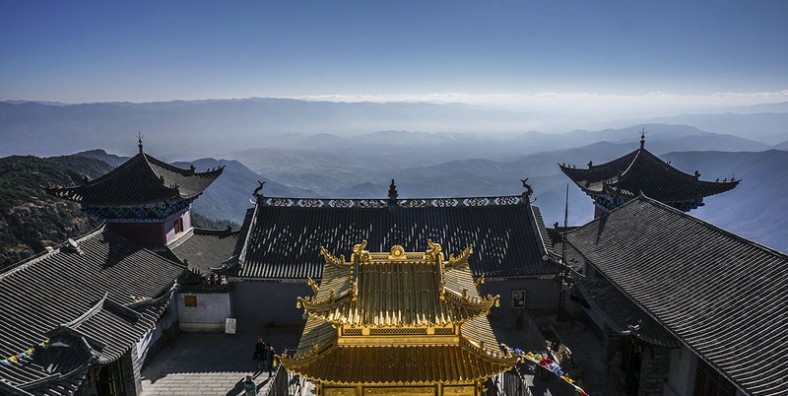 Jizu Mountain or Chicken Foot Mountain is one of the four sacred Buddhist mountains of Chinese Buddhism. Its name comes from the fact that this volcanic mountain is shaped like a chicken’s foot with three hills on one side and a single hill at the back. Many of the temples on the mountain were first built during the Tang Dynasty, reaching their heyday during the Ming and Qing Dynasties. However, during the cultural revolution, many were razed to the ground. Now what still remains are the Jiuling Temple, Zunsheng Temple and Huideng Temple and a few other smaller temples. Besides these Buddhist attractions, you can also climb to the top of the mountain in the early morning and watch the sunrise. It is possible to make a round trip to the mountain top within a day, but lodging in the Bingchuan County is inevitable.

Why is Jizu Mountain so special? 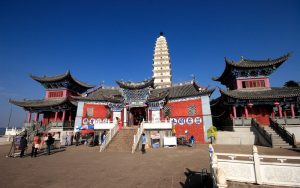 Jizu Mountain (Chinese name: 鸡足山) is a national AAAA level scenic spot in Dali. It is a Buddhist shrine enjoying good fame in South Asia and Southeast Asia and one of China’s top ten famous Buddhist mountains and important national scenic area in Dali. It is a multifunctional tourist attraction based on Buddhist culture and ecological landscape, combining Buddhist pilgrimage, Buddhist studies, tourism and science expeditions.
It is the Buddhist shrine of Southeast Asia, the intersection of Chinese Buddhist and Tibetan Buddhist, enjoying the reputation as “the No.1 Chinese Buddhist Mountain in China” and other titles. It was listed and the 44 tourist attractions in China.

Jizu Mountain is situated at the northwest of Bingchuan County of Dali at the Yunnan-Guizhou Plateau, with Dali and Eryuan at its west and Heqing at its north. The mountain looks like chicken foot (means Jizu in Chinese), hence the name.

How to Get to Jizu Mountain?

The straight line distance between the modern Dali on the southern shore of Erhai Lake to Jizu Mountain (Jizushan in Chinese) is only about 45 kilometers. But the driving distance around the lake and up a valley is about 100 kilometers to the town of Binchuan in a valley below the mountain. The trip to Binchuan from Dali takes about two hours. From there to the Huideng Temple is about another 30 kilometers, and buses and vans are available. There are horses, a walking path, and a cable car from there to Lengyan Pagoda. 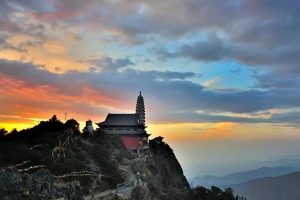 1.Zhusheng Temple (祝圣寺)
As the largest temple on Jizu Mountain, Zhusheng Temple was first built during Ming Jiajing Period. In Qing dynasty, the famous Zen Master – Xuyun Monk raised money and built the temple. On the left wall of the temple, there is painted “the Panorama of Jizu Mountain”. In front of the gate, there is a semi-circular pond with an octagonal pavilion on it. The whole temple is in grand scale with rich ethnic and religious characteristics. 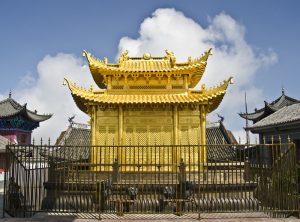 On the tallest peak of Jizu Mountain is a monastery that includes the ancient Jinding Temple and Lengyan Pagoda. The square-shaped pagoda was built after the Tang Dynasty, but it looks similar in style to the Tang Dynasty pagoda in the ancient city of Dali. But this was built at the top of a very high and steep peak. Imagine the work that went into its construction a thousand years ago! The attached Jinding hall has statues where Buddhists go to worship. The original Jinding Temple was moved from Kunming to this mountain in 1637. On a clear night, you can see the Milky Way and thousands of stars. If you stay in the accommodations nearby, you can see the sunrise.

Jizu Mountain is naturally beautiful with the “4 sights and 8 landscapes”. The 4 sights are: sun sight, cloud sight, sea sight and snow sight and the 8 landscapes are: the Buddha’s light, the thunder in a clear sky at Huashou, snow at Cangshan Mountain, the mist on Lake Erhai, the pine trees, the flowing fall, the autumn moon in the yard of the pagodas. In addition, there are some other scenic spots, such as Huashou Gate, the fall at Yulong,the empty ancient tree. The scholars of different dynasties, for example, Yang Fu, Yang Shen, Li Yuanyang, Xu Xiake, Zhao Fan, Yuan Jiagu and Xu Beihong, visited Jizu Mountain and wrote poems or drew pictures to describe the scenery here. During the Festival of Worship on Jizu Mountain from January 1 to 15 (according to the lunar calendar) each year, tourists from all directions, even foreign countries, come here to visit. Nowadays, tourists can enjoy themselves on the Jizu Mountain due to the convenient transportation, for example, the tour road reaching from the county and the tour cable from Huideng Nunnery to the Golden Top.

There are several hotels on the top of Jizu Mountain, such as Jinding Hotel, Jizu Mountain Hotel. Travelers also can stay at Zhusheng Temple, Jiulian Temple and Huideng Temple. The room fee is 40-50 yuan per person.

The best time to visit Jizu Mountain is in the 12th and 1st months of the lunar calendar when Pilgrimage Festival is held. There are many featured activities at that time.

1.Dali Ancient Town
Dali Ancient Town is a historic town with rich culture located between Cangshan Mountain and Erhai Lake. Unlike any other Chinese town, the traditional Bai ethnic houses give the town distinctive feel. Travelers can wonder in this leisure town to appreciate the unique ethnic architecture and discover its profound history and culture.

Baoxiang Temple is also called as Shibao Temple. It is known as the “Hanging Temple of Yunnan” since it is situated on the steep cliff. 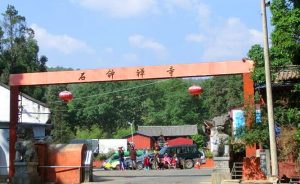 Located in Shizhong Shan Mountain (石钟山) of the Shibao Shan mountain range, the Shizhong Shan Grottoes (石钟山石窟) are also sometimes referred to as the Shibao Shan Grottoes (石宝山石窟), or “Stone Treasure Mountain Grottoes.” Housed in buildings clutching the mountainside, these ancient grottoes house Buddhists sculptures, statues of Bai deities of the ancient Nazhao and Dali Kingdoms, and yoni shrines (representing the female sex), some dating back over a thousand years.