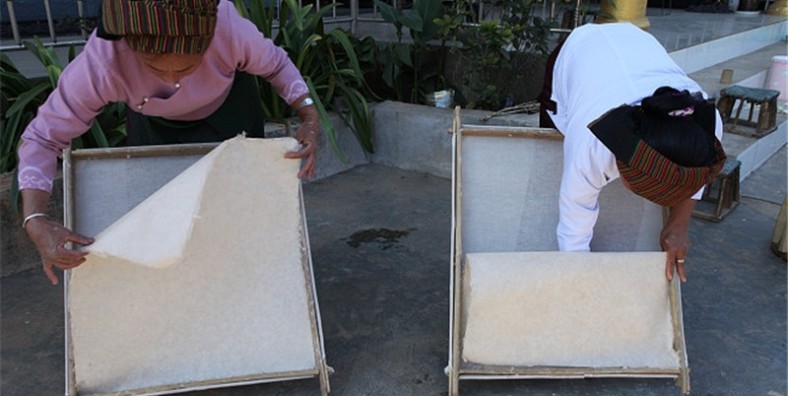 The papermaking is one of China’s four great inventions, and it has been the treasure and proud of people. However, the way of ancients’ papermaking has been extravagantly strange for us who live at the age of Internet, and what we roughly understand comes from brief introduction in literatures. While folk craftsmen scattered in ethnic minorities insist on unique workmanship spirit and make their living by virtue of their own skills, by which we are enabled to witness real traces of the papermaking technique in remote times. The craftsmen in Shangyun Town have been passing on their skills and hold in their own worships with the papers developed themselves.

Mangjing and Mangna, unique villages where Dai people live and under the jurisdiction of Mangjiao Village Committee, Shangyun Town, Lahu Ethnic Autonomous County, Lancang, located at six kilometers in the west of Shangyun Town, Lahu Ethnic Autonomous County, Lancang, is a Dai inhabit mountains. Dai People living there Claims themselves to be “Beng People”, the difference between Ben People and other Dai national minorities lies in women’s headscarf headscarves, which are made of native clothes woven by women themselves, taking on a unique pattern of yellow-red-black alternate colors.

It was said that “Beng People” emigrated from Baoshan, one tribe of them settled in Mengding Town, Gengma County, and the other visited Shangyun Town, Lancang County. There is no historical data available for review for when “Beng People” started to conduct the papermaking, which has a long history by inferring from related information. The ancestors of Dai people embraced Buddhism, and they would chant the buddhist scriptures while holding sacrifices. And the paper was required to transcribe scriptures, the paper was deemed to be luxurious item under the condition of backward social production at that time, and common people could not afford it. Gradually, diligent and smart ancestors of Beng people found that the barks of broussonetia papyrifera could be used to make the paper, which developed were characterized with tenaciousness, whiteness, tenderness, smoothness, non-obsoleteness under long storage, non-breakage under great force, anticorrosion and mothproof feature and others advantages, and the characters written down on the paper would never fade. So the scriptures transcribed could be saved for forever and handed down from generation to generation. Currently, not only Dai people transcribe scriptures with the paper but also surrounding peoples and folks from temples apply the paper and other sacrificial offerings, and the paper is widely used in folk activities and daily life. 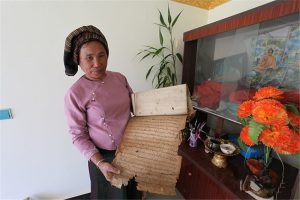 Manual papermaking technique of Beng people from Dai nationality is a technique developed based on traditional papermaking, and it is a “living fossil” of folk papermaking in China. This papermaking process completely remains 5 processes including the “soaking, steaming, paper pouring, paper drying” as well as 11 working procedures including materials purchasing, soaking, mixing, steaming, washing, pulp tamping, paper pouring, paper drying and paper unveiling. Beng people call paper developed “Gei” or “Jie” (spelled in Chinese Pinyin), main raw materials of such paper are made of broussonetia papyrifera (named to be “Maisa” by Beng people) and lobules tree (named to be “Maihai” by Beng people). The broussonetia papyrifera tree is a perennial broadleaf shrub generally grown in Lancang, which is easy to plant and survive, and this species of tree has been planted by many farmers around the house. This plant grows faster, and normally it may be cut approximately on yearly basis. Its branches may be burned as the firewood, its leaves may be used to feed pigs, and its barks may be used to make paper. 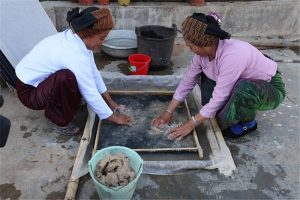 Additionally, it is required build a small pool as a paper bed for purpose of traditional papermaking, and then develop a wooden frame with the size in 77 cm (length) ×55 cm (width) with native cloth nailed inside wooden frame nails to shape papery blank, which is called to be “He” (Pinyin in Chinese) by Beng people. Put two thirds of clean water into the pool while pouring the paper, and then gently put the ground paper into the pool, put appropriate amount of pulp into the pool in turn, spread such paper continuously with the hands and gently beat back and forth, and then slowly elevate the pulp when it settles onto the cloth, while the paper developed will not be divided evenly and even suffers from the emptiness and become the waste if the pulp used is excessively much or little, unevenly spread out, excessively and fast forced in the process of ground paper and other improper operations. Put the ground paper and expose it under the sunshine when it is put up, and flatly roll the ground paper gently with smooth bowl when it is half dried, wait and take the paper from the ground paper until the color of the paper completely become white. In this case, the paper is finished.

Handmade papermaking of Beng people from Dai ethnicity in Mangjing and Mangna was commonly found in 60-70s of the 20th century, and 70% of women in the village were capable of making paper, and the paper developed by them ever spread to Burma and Ximeng, Lincang and Jinghong in Yunnan. 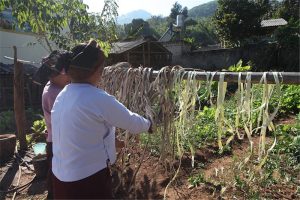 Presently, since a large number of mechanical paper floods the market, traditional manual paper is influenced, causing that many farmers engaging in paper making have to turn to the development of other industries due to excessively high cost of traditional handmade papermaking, harsh marketing, low price and long duration. Now almost there are not farmers severing the papermaking, traditional manmade papermaking process of Beng people from Dai ethnicity in Mangjing and Mangna are in endangered status. In order to protect cultural treasure of Beng people and to enable successors to completely and authentically taste such ancient homemade manmade papermaking process, the papermaking of Beng people had been enrolled into municipality-level intangible cultural heritage protection list in national and folk traditional folk culture survey of Yunnan in 2005 for the first time.