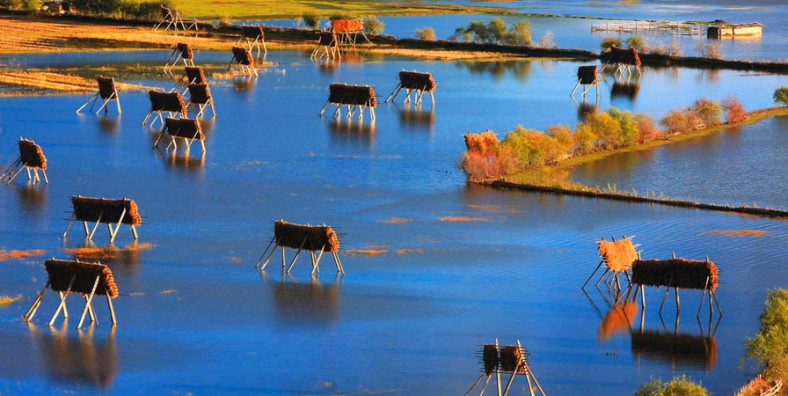 With a total area of 31.25 square kilometers and an elevation of 3266 meters, Napahai Nature Reserve is located in Shangri-la city, Yunnan province. Established in 1984, it is a wetland ecosystem protection zone to plateau seasonal lakes and marsh meadows. It is also the wintering habitat of migratory birds such as black-necked crane, yellow duck, bar-headed geese, etc.

Best Time to Visit: From June to November

Why is Napahai Lake So Special?

With a total area of 31.25 square kilometers and an elevation of 3266 meters, the state-designated wetlands area Napahai Nature Reserve is located in Shangri-la city, Yunnan province. Established in 1984, it is a wetland ecosystem protection zone to plateau seasonal lakes and marsh meadows. The natural reserve is flat, surrounded by mountains. When October steps in, flocks of black-necked cranes, bar-headed geese, white cranes, sheldrakes regularly come here looking for food and for fun.

Where is Napahai Lake – Location

Grassland: Napahai Grassland is the largest one in Shangrila. Due to the humid climate, the local grass grows faster than other areas. Every year in May, Napa grassland is green while that in other area just begins to sprout. At the beginning of June, a variety of wild flowers open and flocks and herds have fun on the grassland.

Animals: Napahai Lake is a true paradise for all types of birds, most especially for water fowl, such as the black-necked cranes, the bar-headed goose – as well as a number of other species of geese – the common mallard, the Himalayan griffon, the egret and the white-tailed eagle.

How to Get to Napahai Lake?

►By Bus: Regular buses to Yila Grassland serve this route, departing for the nature reserve from the Dukezhong Ancient Town carpark, running between 9:00~18:00.

►By Car Rental: Tourists can rent a car to visit Napahai Lake which is very convenient to enjoy the scenery along the ring road and back to Shangri-La.

► By Bike: Rent a bike to ride along the ring road is also very popular and a good way to appreciate the scenery. 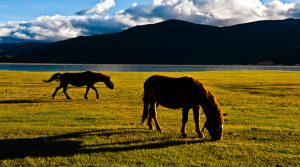 The verdant grasses sprawl on the earth like a greenish felt, flocks and herds here and there leisurely eating grasses on Napahai Lake.You find they mix with each other, and a flower of life is in blossom. In the west stand three snow mountains, they are not only a part of charming scene of southwest China, but also sign of tremendous vitality.

In winter and spring, when the lake of the Napa sea shrank, it became a vast swamp meadow, of which the Yila grassland,  is the largest spring pasture in Yunnan. 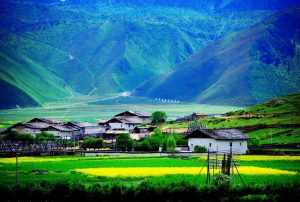 Gunqin Temple Ruins is nestled among the tall old trees of one of the mountain peaks to the northwest. Gunqin Temple was built in the late Yuan dynasty and destroyed in the early Qing dynasty. Overlooking from the temple, you can have a panoramic view of Napahai grassland.

There are a number of small to medium-sized Tibetan villages scattered around Napahai Lake where you can have a close-up view of life as it is lived today in a Tibetan village.

Napahai Lake is not far from Shangri-la city including Songzanlin Monastery. If tourists want to travel there by car-rental, Napahai Lake could be one of the stops along with other scenic spots. Besides, another major way to visit the lake is to cycle around, which is about 40 kilometers long. It takes about three or four hours to complete one circle. The grassland, lake and snow mountain scenery along the road is very beautiful.

Note that one must ride along the lake clockwise, so that the west side of the ring road around the lake will be downhill, which can be easy for the cyclists. There will be some long uphill on national highway 214 back to Shangri-La city, so a multi-speed mountain bicycle can make the ride easier. 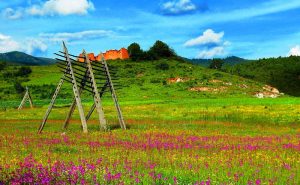 The best seasons for traveling to Napa Lake are summer and autumn. Every year in May and June, lush green pasture, various wild flowers blossoming, and yaks, horses roaming leisurely. When autumn and winter comes, the prairie is golden with snowcapped peaks of the distance reflected in the lake. The black-necked crane, yellow duck, bar-headed goose and other large birds circling above the surface of the lake and frolicking in the grass.

Built in 1679, the monastery is the largest Tibetan Buddhist temple complex in Yunnan province and one of the famous monasteries in the Kang region, which belongs to the Yellow Hat sect of Tibetan Buddhism of the Gelukpa order of the Dalai Lama. It is reputed as the Little Potala Palace due to its complex of Potala Palace in Lhasa, Tibet. Located in the capital of Diqing Tibetan Autonomous Prefecture, it is also the most important monastery in southwest China.

As one of the largest and best-preserved Tibetan residence groups in China, the 1300-year-old Dukezong Ancient Town, situated at Shangri-la County, Deqing Tibetan Autonomous Prefecture, not only plays an important role in the Old Tea – Horse Road, but also serves as a corridor connecting Chinese and Tibetan language, people, religion and cultures. Until the fire disaster damaged the most of Tibetan dwellings in 2014, it still remains the traditional Tibetan architectural style.

Pudacuo National Park is a 1,300-square-kilometre (500-square-mile) national park located in Shangri-La County, Yunnan. It is notable as the first national park in China to meet International Union for Conservation of Nature standards. As such they are part of the Three Parallel Rivers of Yunnan Protected Areas World Heritage Site.

► Please bring altitude sickness medicine with you in case that you could not acclimatize to the high plateau when you are at Napahai Lake.

► Renting a bike to cycle around Napa Lake will be wonderful cycling trip for you.

► High uv on the plateau, if you ride along the lake, be sure to wear light, long-sleeve tracksuit and pay attention to sun protection.

► It will take a long time to ride, and there will be small shops on the road for supplies, but it will be more expensive. It is suggested to take water and solid food with you.

► Grassland is the collective property of Tibetan people. Don’t step on the grassland without permission, so as not to cause unnecessary trouble.

► There are a number of horse – riding routes for about 1 hour.

14 Days Yunnan Cycling Tour from Shangrila to Lijiang and Dali

22 thoughts on “Napahai Lake in Shangri-La”