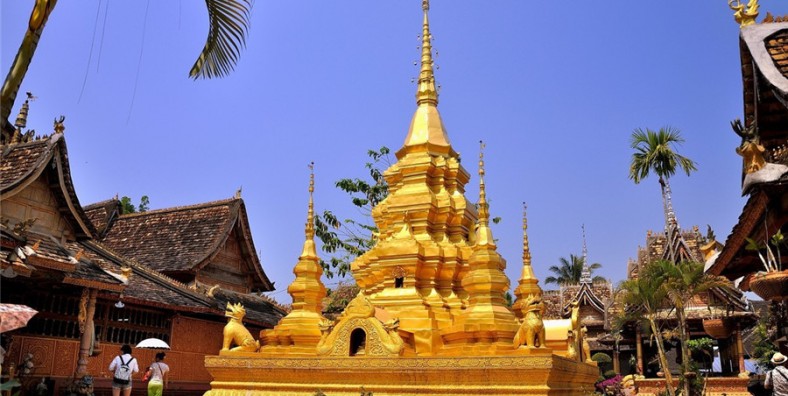 Dai Minority Garden(傣族园)is in Ganlanba, which is located in the lower reaches of Lancang River, 40 kilometers from Jinghong City. In Dai language, it is called Menghan. There are hundreds of Dai households living in Ganlanba. Ganlanba is only 530 meters above sea level, being the lowest and hottest place in Xishuangbanna Dai Autonomous Prefecture. A local saying goes that ”if Xishuangbanna is a beautiful green peacock, Ganlanba is its tail and Dai Park is the most eye-catching feather of Ganlanba”. 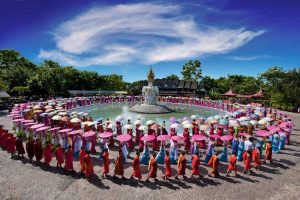 Why is Dai Minority Garden so special?

There are  5 villages in Dai Minority Garden(Manjiang Village曼将、Manchunman Village曼春满、Manting Village曼听、Manzha Village曼乍、Manga Village曼嘎). Dai Minority Park is famed as a ”village of imperial garden” with two main Dai villages and three smaller villages. One is Garden Village called ”Man Song Man”. Another is Flower and Fruit Village, namely ”Man Ting”. No matter which village you enter, you will find classical Buddhist temples and traditional bamboo houses of Dai people. Coconut palms, areca trees, mango trees, pineapple trees and other tropical trees can be seen in every corner of the village. Bamboo houses are enchanting framed by green trees.

It also offers traditional Dai culture. If you want to visit the Dai village, you are adviced to select special festival time such as the “Water Festival” in mid April. You can see rich and lively tradition activities, singing, dancing, you will also gain understanding of the simple Dai characters through attending these activities. Participate earthly when join the Water Festival, the wetter you get, the happier and better luck you will be!

Where is Dai Minority Garden?

How to Get to Dai Minority Garden?

By water: take ship at the pier of Jinghong and go down along the river to Ganlanba, 2-3 hours

By bus: there are many buses departuring from the bus station near the Shuyuan Hotel of Jinghong City, 8.5 yuan for ticket.

Yingbin Square is the place to give a Dai Ethnic welcome ceremony to tourist. They make us have a good impression of Dai Minority.

● Mansongman Temple(曼松满古佛寺)
The Mansongman Temple has a long history about 1400 years, is one of the oldest temple in Xishuangbanna. It shows tourist with many  Buddhism culture activities, such as “Danfo“, means to offer something to a temple as a way to pray for peace and happiness, chant sutras, and  Buddha worship. 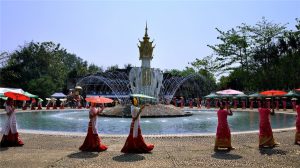 ●Water-splash Square(泼水广场)
The Water-splash Square is the main activity area of Dai Park. There are 2 water-splash show gived by more than 100 professional people. One is starting at 14：50，the other is 16：30.
●Dai Village(傣族自然村）
Dai village will open big water-splash activity, which can let tourist join in . you can enjoy the funny of water-splash, and experience the traditional festive scene of Dai Ethnic Water-splash festival.
● Outdoor Theater(露天剧场)
You can enjoy the Dai Ethnic show on the outdoor theater in 15:20 every day. With singing and dancing, the show reflects the  traditional culture essence of Dai Minority, and it playback the historical origin of  the groom invitation by the King of Dai. You can learn Dai living custom from the show. Played by 100 actors, the show is grand spectacle and magnificent.

In Dai Minority Garden, you will be able to enjoy unique Dai food, which has high reputation in Yunnan Province. Zhutong Fan (rice cooked in bamboo), Nanmi (喃咪), Bamboo Worms are highlights there. At night, visiting food stalls in Dai Minority Garden is a good choice. Local snacks (barbeque, New Year cake, e.g.) and tropical fruits are worth trying. 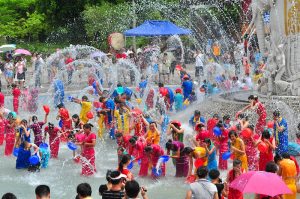 Water Splashing Festival is a traditional festival of Dai nationality. It is on the new year of Dai Calendar (in Mid June in Dai Calendar). People will water the Buddha in the temple and pour water to one another to show their sincere blessing and wash away their troubles. The grandest festival of the Dai is usually held along with activities such as dragon-boat racing, sending off skyrockets, and throwing love pouches. It is believed that everyone being splashed at will have good luck. 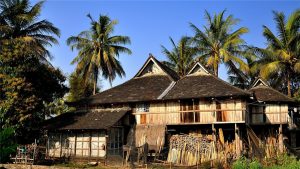 When entering the Dai village you will see many bamboo houses in front of your eyes. Living in the bamboo structure is the unchanged habit of Dai for over a thousand years. This construction suits the tropical rainforest climate in south Asia. The bamboo house come into two layers; the ground lever has fence, which use as the storage and a space for raising poultry.Upstairs is the place for living; every bamboo structure has a balcony, a big setting room lay with bamboo mat which is the place for eating, resting, and greeting the guests. There is a stove in the center of the room, Dai use it for cooking and heating the house. The setting room is connect with the bedroom and there are usually three to five rooms in the bamboo house.

● How to build a new house

Building new houses is their great event. Firstly they must select the location and make the base, then they must prepare pillars, when the wood for the pillar is identify, the villagers will spray water to bless it and by blowing bugler. The eight pillars must be divide into four “male pillars” and four “female pillars” and distinguish by male clothes and female clothes covered on the pillars.While the house is built, the people of the whole village will come and help. The owner will also prepare rich food and drink to entertain the villagers coming to help and the friends coming to congratulate. It is very warm and lively.

Many standing Dai Ethnic Villages show the unique culture, art, and colorful ethnic experiences. Xishuang Banna is a minority autonomous prefecture mainly resides with the Dai ethnic. There are 13 minority groups living in the prefecture, the Dai ethnic occupies most part, and the population spread over 74% of the whole autonomous. The people of Dai ethnic are united and harmonious.

The Dai are Hinayana Buddhists who first appeared 2,000 years ago in the Yangzi Valley and who were subsequently driven southwards by the Mongol invasion of the 13 th century. Countless Buddhist temples were built in the early days of the Dai state and now lie in the jungles in ruins.

The Dai live in spacious wooden houses raised on stilts, to keep themselves off the damp earth, with the pigs and chickens below. The most common Dai foods are sticky rice (khao nio in Dai) and fish. The common dress for Dai women is a straw hat or towel-wrap headdress; a tight, short blouse in a bright color; and a printed sarong with a belt of silver links. Some Dai men tattoo their bodies with animal designs, and betel-nut chewing is popular. Many Dai youngsters get their teeth capped with gold; otherwise they are considered ugly. 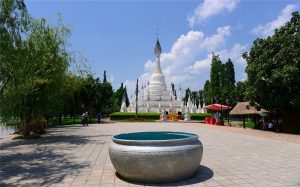