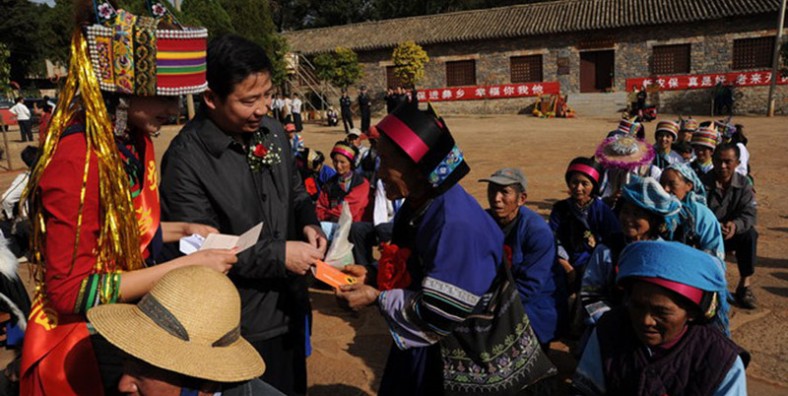 Stepping into the Nuohei Village of Shilin County where the world famous Stone Forest is, you will be greeted by an authentic stony world. Most parts of the residences and utensils in the Sani ethnic village are marvelously made of natural lime stones, including roofs (tiles), walls, tobacco kilns, stables, grinding mills, gates, and roads. Some of the stony houses inside the village are at least 100 years old, leaving a wonder to explorers. The best way for exploring the village is to stroll along the major road in the village, with local stony residences scattering here and there.

Nuohei Village lies in the Karst geographic area of Shilin County. The locals have kept a tradition to make use of what is available near where they live. After lime stones are exploited, they will process them into slabs according to the natural veins for further use–paving roads or constructing houses. In the ancient times, forefathers of the Nuohei villagers chose flat areas in the stony mountains to chisel stones and construct. It is said that the stones dug out when people made building foundations were galore enough for constructing an entire house.

Like folk residences elsewhere, the houses in Nuohei are constructed with woods and mainly stones. Most families have a principle house (three rooms) and a side house (two wing rooms); and around each family, you can see vigorous aged trees and bamboo groves.

Due to its artistic value, Nuohei is the haunt of many art school students for outdoors painting.

As the village gets more and known to the outside world, many villagers have opened restaurants in the village, such as Cengshi Villa, Sitongyuan, Yulanyuan, Luosonghang, Lijiayuan and Family Wang’s Compound etc. You will be treated with household dishes of the Sani people.

A little history of the village

Nuohei village was established in the 21st year (1816) of Jiaqing Reign of the Qing Dynasty (1644-1911), and it was once a pass for horse caravans from Luxi to Kunming. In the 1920s when China was in the time of war lords, Nuohei villagers constructed stone walls, four gates, and five blockhouses around the village to fight against rampant bandits.

Some old villagers say that near the entrance to the Mizhi holy forest, there used to be two steles engraved with the history of the village, but unfortunately destroyed during the Cultural Revolution.

In July 2009, The 16th Congress of the International Union of Anthropological and Ethnological Sciences was convened in Kunming, and some 130 attending experts took an investigation tour to the village.

The festival of men
95% of the Nuohei villagers are Sani ethnic members. In each lunar November, they spend the Mizhi festival which is only attended by men.

In the hearts of the Sani people, Mizhi forest, also called “sacred forest”, is the holy place where any living being is inviolable.

When the Mizhi festival is due, all the men of a Sani ethnic village will rally to select the Mizhiweng or the head responsible for presiding over the festival, and to pick out eligible men to take part in the sacrifice offering ceremony for the Mizhi God. Women are required to stay indoors during the festival.

What is needed for the ceremony is a white goat (sheep), a white rooster and a white pig; and when the day comes, the Mizhiweng will set assignments for all the participants.

Abiding by the conventions passed down for a long time, the Bimo (Yi ethnic priest) will be accompanied by some eligible men to access to the Mizhi Forest and find the holy Mizhi Tree. They will piteously lift the Mizhi God–which is enshrined every year under the Tree–into the basket cushioned with pine needles. After the ceremony is carried out in the forest, the Mizhi God will be taken to the home of the priest to be “bathed” and redressed, and taken back to the forest next day.

During the seven-day festival, the priest will lead all the men to tour in the village, speaking aloud in order to blame misbehaviours in the village.

The Mizhi God is believed to live in the holy Mizhi Forest, safeguarding the Sani people, though there circulates different versions of folklores for the festival.

Travel tips
(1)-Nuohei village is 4 km west of local council of Kuishan Town; 30 km from Shilin county seat; 25 km from the Stone Forest;
(2)-You can contact local travel services in Kunming to organise tours to the Stone Forest and Nuohei Village.

Chihiro Morven Spa Hotel in Kunming
Puzhao Temple in Jinning District, Kunming
Tiger Leaping Gorge in Yunnan
How to Get to Midu County from Kunming
Pengzhan Village of Chahe Town in Eshan County, Yuxi
Yunnan holds dinner parties in America for FGSF
Zhongying Village of Zhonghe Town in Tengchong City, Baoshan
Is There a High-Speed Train to Yunnan from Beijing, Shanghai, Chengdu, Xian, or Other Cities of Mainland China?