Qutong Mosque(曲硐清真寺) is situated in Qutong Village, which is an important place of the Southwest Silk Road. Qutong Village is the largest Muslim village in west Yunnan, enjoying a population of over 7000. The Qutong Mosque enjoys the history of hundreds of years, entitled as the model mosque and cultural relics protection unit of Yongping County.

How to get to Qutong Mosque?

The Qufu Mosque was first built under the Nanshan Mountain in Qutong. Before the Xinhe River was diverted, the river went straight down from Ximen Street. The whole village was divided into two halves. The river was separated by a small river. Because of the inconvenience, there was a big worship temple and a small worship temple.

After the re-construction of the new river in the late Qing Dynasty, the population of Qufu increased, the housing area expanded, and the villages were connected. In the second year of the Republic of China (AD 1913), the two masques merged into one and built the existing worship mosque. The mosque is composed of majestic gates, main halls and Xuanli Building (called worship building). It is divided into two inner and outer courts. The inner courtyard has a main hall, a worship hall, a north and south hatchback, and the outer courtyard has a north-south wing and a gate. In the “Cultural Revolution”, the worship hall was destroyed. 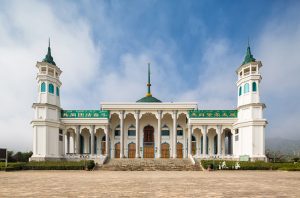 In 1982, the local Hui people raised funds to renovate the main hall. In 1988, Qutong Mosque was listed as a county-level key cultural relics protection unit. In 1990, with the help of government, mosque raised more than 200,000 yuan, and newly built a building called the Bailou(拜楼) and the Damenlou Building(大门楼). The construction of the worship building adopts the combination of ancient and modern styles, architecture of Chinese and Western, with both the architectural form of the ancient Roman church and the antique ethnic characteristics. The County Islamic Association is set up in Qutong Mosque.

When entering the gates of the mosque, the six marble veneered square pillars stand in front of the building. The Bailou is divided into four floors, and the top of the first floor is made of a turquoise tile to form a pagoda-shaped arc. When you climbed onto the steps to the middle walkway, you will feel refreshed. A solemn chapel stands in front of you, with the green trees along the way and rooms for learning scriptures. On the second floor, there is a broadcasting room for preaching the teachings and reciting the Quran. The meeting hall and reading room are situated on the third floor. Setting foot on the steel ladder, we can see a delicate and chic hexagonal pavilion here.  We will have a panoramic view of the whole plain. In the early morning, when the rooster does not announce, the bells and chanting voices of the worship welcome the new day.