Wangu Pavilion is a landmark building of Lijiang. In Naxi language it is called “Wengu Lun”, which has similar pronunciation of “Wangu Lou” in Chinese, thus got the name Wangu Pavilion (lou means pavilion), literally means “the pavilion of eternities”.
After ascending the Wangu Pavilion, you can see magical Yulong Snow Mountain in the north, beautiful Lijiang Ancient Town in the east, picturesque pastoral villages in the south and colorful Lijiang new town in the west.

Built in Qing Dynasty, Wenchang Palace owns a history of 272 years and was once a place for Lijiang students to take imperial examination and for local people to talk about current affairs. Going straight from the path to the right of Qianxue Tower(嵌雪楼), travelers can see the Wenchang Palace.
The house is sit north to the south, like the layout standardization of Confucious’ temple, also copy local said the Imperial Palace Beijing. Building group from the palace, pan-chyr, lattice star gate before the house, Wenchang house, the most holy Kai Saint floor building, Kuixing Lou soil, Han Jing Dian, hall and several buildings of the subsidiary, the size of housing a total of more than 20, about 2000square meters, elaborate design, the construction of huge, magnificent. The main building for the hall of Wenchang, covers an area of about 140 square meters, high about 20 meters, and divided into two layers, with the Ming Dynasty from Dali purchased the Wenchang emperor statue.
Wenchang Palace used to be the generic terms of Six Stars in heaven. Wenchang was dubbed emperor during Yuan Dynasty. Wenchang Wang, that is namely Zhangyu of Shu Kingdom, called himself Shu Emperor and died in battle when he revolted Fujian. The later generation built ancestral temple in Qiqu Mountain in memory of Zhangyu. When Emperor Xuanzong of Tang Dynasty via Qiqu Mountain, he was touched by the story of Zhangyu so that confer a posthumous title for him. Therefore, Zhangyu was named Wenchang Dijun. Except for the achievement of saving people and brave revolt, he was also the good sample of filial piety. It is said that the emperor of heaven ordered Wenchang Dijun to be in charge of earthly imperial examinations. After Yuan and Ming Dynasty, imperial examination system became flourishing so that the enshrining of Wenchang Dijun became widespread. 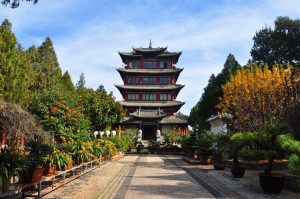 With five-story and whole wooden structure, Wangu Pavilion is 33 meters high, symbolizing the original 330,000 people of all nationalities in Naxi Autonomous County of Lijiang. The pavilion is mainly constructed on 16 columns and each one is 22 meters in height. The use of 16 columns reflects a legend of epoch-making seven sisters and nine brothers in Naxi Dongba hieroglyphs, meaning Naxi people creating a better world together. The height of 22 meters reflects the saying “Good things should be in pairs” and the marriage custom of selecting double day as the auspicious day.

There are four pairs of different stone lions at four sides of the pavilion and stone stairs leading to its main entrance. Wangu Pavilion is decorated with 2,300 auspicious patterns, representing 23 ethnic groups living in Lijiang. As an art form, 9,999 dragon patterns are sculptured or painted in the entire building. To add one more dragon at the caisson ceiling to reach 10,000, pronounced in Chinese as “wan”, would give the meaning of ever-lasting or eternal prosperity.

Distances from Other Scenic Spot in Lijiang Old Town:

• The Giant Water Wheels: about 0.2 kilometer

The Location of Wangu Pavilion,Lijiang