King Gesar(格萨尔王) is an oral epic of Tibetan Ethnic Minority, which is about Tibetan people’s legend, cultural and so on. It is one of the Intangible Cultural Heritage in Yunnan. 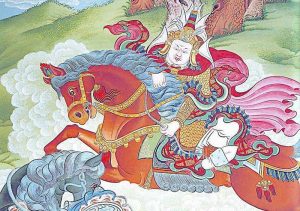 Tibetan epic Gesar is also called King Gesar, Legend of Gesar and so on. It is a well-known and popular heroic epic in Tibetan areas of Yunnan, Sichuan, Tibet, Gansu and Qinghai provinces. Its lines had been recognized as 300,000 to 1.5 million lines, and it is known as the longest epic in the world. In Yunnan, it is mainly spread in Diqing Tibetan Autonomous Prefecture(迪庆藏族自治州), Lijiang (丽江) and other places.

King Gesar mainly describes the war, such as The Four Battles of Four Direction(四方四大战役). King Gesar also tells the great events in King Gesar’s life, such as Gesar’s life in heaven and his  reincarnation in the lower world, his marriage, how he  became the king through horse racing , how he defeated the demons of the north and so on. 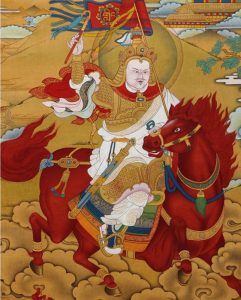 King Gesar is a typical figure in Tibetan folk literature. People use romanticism to eulogize the ancient hero through various magical stories. From all kinds of stories about him. We can see that Gesar’s ideal was the ideal of the Tibetan people, and his behavior was the wish of the Tibetan people at that time. All the works mainly embodied the spirit of patriotism, against oppression and religious oppression. Most events that narrated in the stories are directly related to Tibetan people’s lives, which is the ultimate reason why the epic is so popular among the Tibetan people.

In addition to a large number of copies and a small number of engraved copies of Gesar circulating in Yunnan, there are some Tibetan folk artists known for oral Gesar, they were called Zhongken (中肯), which means artists who specialize in singing Gesar. During singing, different characters have different tones, and each character sings differently on different occasions. The whole epic is sung in 40 to 50 different tones.