As the witness to the Islamic history and culture, Donglianhua Mosque is located in Donglianhua Village (which means the East Village of Lotus), Yongjian Town, Weishan Yi and Hui Nationalities Autonomous County of Yunnan Province. Donglianhua Village used to be an outpost of the ancient Tea and Horse Roadl and now it is a famous historical and cultural Muslim village with a long history, rich ethnic customs, well-preserved old architectures and glorious cultural background.

Covering a total construction area of 3,000 square meters, Donglianhua Mosque has the structure of 9-torn and 11-type, which reflects the integration of traditional Chinese Palace Culture into traditional Islamic culture. Its prayer hall is able to simultaneously hold a capacity of 1,000 people. It has a proportioned layout with the minaret and the four directions freely connected with each other. With white walls and green tiles, exquisitely decorated beams and painted rafters, Donglianhua Mosque is built into an elegant and primitive mosque with characteristics of local ethnic folks. 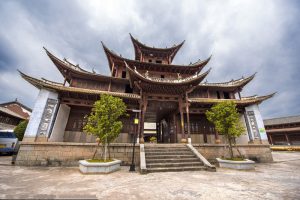