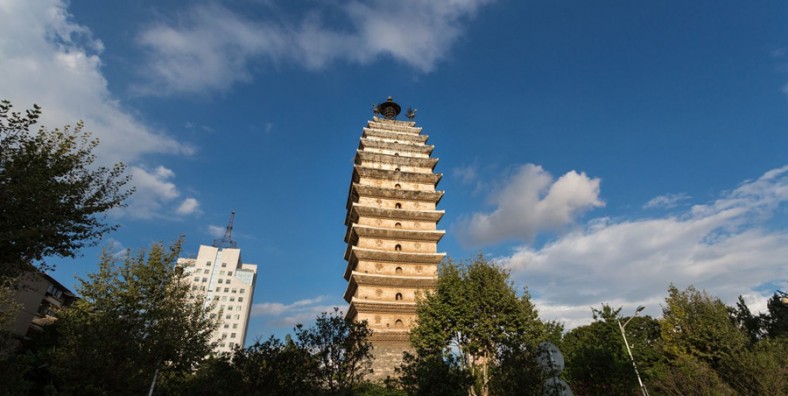 The History of East Pagoda

East Temple Pagoda used to be in Changle Temple on Shulin Street in Kunming City. Changle Temple was also called East Temple, thus the pagoda’s name. According to historical records, the temple and pagoda were built at the same time as the West Temple and Pagoda, but the pagoda was destroyed in a strong earthquake in 1833. In 1882 it was rebuilt on a new site hundreds of steps east of its original location, which lay too low for the pagoda’s foundation. The existing pagoda, a multi-eave, square, thirteen-storey, brick structure, dates back to 1882 during the Qing Dynasty. In appearance, structure and size it resembles the West Pagoda. Although it was rebuilt in the Qing Dynasty, it retains the style of the Tang Dynasty.

The Characteristic of East Pagoda 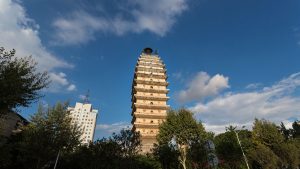 In appearance and structure the pagoda resembles Small, Wild Goose Pagoda in Xi’an.

The square, thirteen-storey, rnulti-eave pagoda is some thirty-six meters high. Its interior is hollow, with wooden flooring and a staircase. The bricks of the pagoda are inscribed with Buddhist scriptures and incantations in Chinese and Sanskrit and the stamps of brickmakers, all invaluable relics. The pagoda has undergone repairs several times over the past more than a thousand years, so some parts have been changed, but as a whole it has retained its Tang Dynasty style.

West Pagoda, also known as Huiguang Temple Pagoda, stands on the west side of Dongsi Street. It has a history of more than 1100 years. In the plum blossom and smoke rain in February, the “double Towers” became one of the “eight sights of Kunming” in the Ming and Qing dynasties.

It takes tourists about 10 minutes to get to East Pagoda from downtown of Kunming.