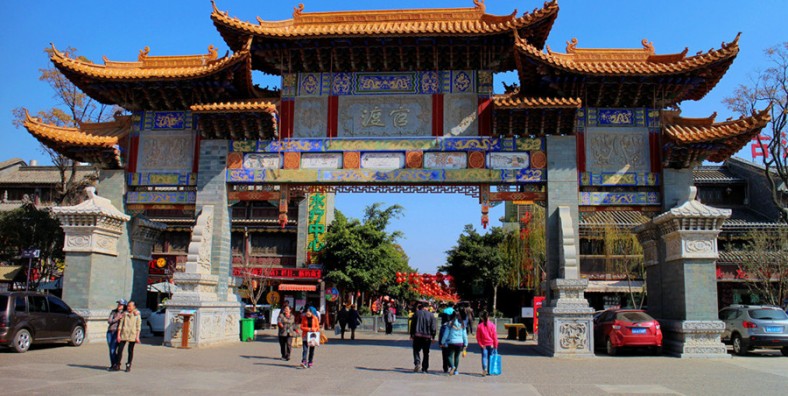 Why is Guandu Ancient Town so special?

Guandu Ancient Town is one of the birthplaces of Yunnan Culture, and also one of the main historical and cultural landscape of Kunming tourism. As early as Nanzhao Dali Kingdom, It had already been a large market and important transportation hub at the north east lake bank of the Dian Lake. Guandu Town used to be a fishing village during Tang Dynasty. The ancient Guandu is an ideal place for appreciating the beauty of the Dian Lake.

The History of Guandu Ancient Town

“The first of six temples” in Guandu–Miaozhan Temple was built in the from the early Yuan dynasty to Yuan twenty-seventh year (1290), was completed in 1295, after being flooded it became collapsed, and in 1325 relocated in the middle of the town. In the temple there is the east, and the west two 13 floors solid square brick tower with thick eaves. Later, west tower was destroyed by the earthquake and the east tower maintained today. Among Guandu Ancient Town religious buildings, the most famous and the most impressive is in front of the national key cultural relics protection unit Miaozhan Temple, Vajra-Base Throne Tower.

Guandu is the first place of Tibetan Buddhism bring into the area of Kunming, the stone pagoda of Miaozhan Temple has left a Tibetan tantra stupa impression deeply, it vividly reflected on lama tower style. Dazhengjue Temple, Temple of the Azure Clouds in Beijing and Ciyun Temple Vajra-base pagoda in Hohhot built later are typical Chinese type multilayer the pagoda of tight tiles. 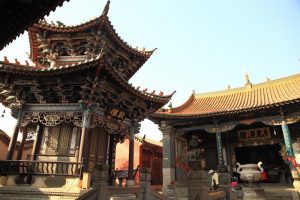 In Yuan dynasty, Confucius Building also established in Guandu, which has a far-reaching influence on Guandu juniors’ reading. Later, the famous scholar Wang Sixun walked out from here. Wang Sixun is Jinshi (a successful candidate in the highest imperial examinations of Qing dynasty) in 45th year of the reign of emperor Kangxi (1706), he held the post of Jiangxi learning official, and also became the Emperor Yongzheng’s teacher, and once Emperor Kangxi gave him thousand rolls of books. After Wang Sixun returned his hometown in glory, he built Cishu (Given Books) Hall to collect books. Cishu Hall still remains today.

In Qing dynasty, within the scope of the Luofeng, Xiuying, Xizhuang and Shangyi four villages in Guandu Town has formed architectural complex which was permeated with thick culture of “six temples, seven pavilions, and eight shrine temples”. These spectacular architectures were in the integration of natural scenery, constituted a beautiful picture and formed the so-called Guandu eight sights, namely “the Ancient Ferry Fishing Lights”, “Range upon Range of Luofeng Peak”, “Yuntai Moon Shines”, “Shepherd in the Apricot Nursery”, “The Smoke Wreathed upward Reach the Clouds”, “South of Yunnan Lawn”, “Buddha’s Guardian Warriors Night Words” and “Writing the Vault of Heaven”.

But, as the years went by, lake shoreline retreated and great changes have taken place in the natural landscape of Guandu. Ancient temple architecture gradually became old and tumbledown, some even been demolished, the famous Vajra-Base Throne Tower caved in for more than one meter, the throne tower also formed a huge crater. In April 2001, Guandu town construction of cultural monuments rescue project started working, after more than two years of hard efforts and due to different levels of government spend large sum of money on this project, 1350 tons of Vajra-Base Throne Tower was lifting 2.4 meters, and Miaozhan Temple and West Tower was rebuilt, the Confucius Temple, Guanwu Temple, Cishu Hall, Fading Temple, Local-Guard Temple, Guanyin Temple and ancient building such as upper and lower attic was repaired. The town’s traditional local-style dwelling houses are planned to repair, at the same time, folk and traditional folk cultural activities and traditional local flavor snacks are gradually restored, the protection of the natural ecological environment is also in the pipeline. We get a old and the young new Guandu contact with brilliant long history and glorious future.

What to see in Guandu Old Town 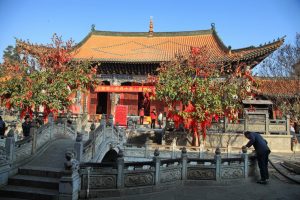 Major sights of Guandu Old Town can be briefed as “six temples, seven pavilions and eight shrines”, among which the earliest are Tuzhu Temple and Fading Temple.

1. Miaozhan Temple -the No. 1 of the six temples

Miaozhan Temple was first constructed in the 27th year (1290) of Zhiyuan Period of the Yuan Dynasty but was damaged by floods. It was reconstructed and shifted to the present site in 1325. There used to be two 13-storeyed dense-eave and solid pagodas of which the west one has been brought down by earthquake.

One can see a plaque inscribed with “Shao Lin Si” (Shaolin Temple). In 2008, Guandu District of Kunming and Shaolin Temple based in Songshan Mountain in Henan Province signed an agreement, according to which the latter is entitled to take over for 20 years Miaozhan Temple, Tuzhu Temple, Fa’ding Temple and Guanyin Temple in Guandu Old Town. Master Shi Yongxin, the Buddhist Abbot of Shaolin Temple, showed up to attend the opening ceremony of “Guandu Shaolin Temple”.

Originally erected in the Nanzhao Kingdom Period (around 756), Fading Temple underwent renovation in the 21st year of Guangxu Period of the Qing Dynasty. It covers an area of about 2,500 square meters, consisting of the Main Hall, the Side Halls, the Wing Rooms and the Gate etc. Being a column-and-tie wooden structure (Chuan Dou Shi), the main hall used to be the shrine of Mahakaya. The side halls and wing rooms are shrines of Buddhist and Taoist deities such as Goddess of Mercy, God of Fortune and Yuewang King (namely Mr. Yue Fei, a brave general in the Song Dynasty). 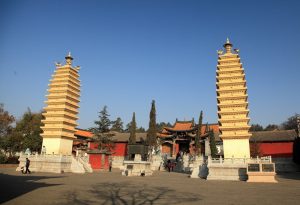 Originally erected in the Nanzhao Kingdom Period (738-937), Tuzhu Temple covers an area of more than 5,000 square meters and serves as the shrine for Deity Mahakaya (Da Hei Tian Shen)-a protector of the Nanzhao Kingdom. Mahakaya was in fact Siva in Brahmanism in Ancient India. After converting into Buddhism, he became a Buddhist guardian. When Buddhism was introduced into the Nanzhao Kingdom (Dali Area) from Tianzhu (Ancient India), he was enshrined as a “patron god” (Tuzhu) by locals of Dali.

Guandu Old Town is usually recognizable by Jingang Pagoda in front of Miaozhan Temple. Sponsored by Luo Gui, a eunuch who garrisoned in Yunnan in the Ming Dynasty, it was constructed in 1457. (“Jingang” is a kind of pagoda construction style originating from India. Buddhist pagodas designed in this style usually comprise two parts: the pedestal and the major part. The pedestal surface appears rectangle or square while the major part turns out to be a big pagoda surrounded by four small ones)

The pagoda is said to be erected to vanquish a devastating devil locally called “Luo Si Guai” (Devil Conch). As the core of the architecture complex of Guandu Old Town, Jingang Pagoda appears to be the oldest of its kind in China.

Jingang Pagoda is composed of the pedestal and the major part. The surface of the pedestal is 10.4 meters wide and long, and 4.7 meters high; its base is hollow and has four gates spacious enough for vehicles to pass through. The major part of the pagoda is five pagodas the biggest of which is as tall as 16 meters and the small four ones all measure 8.84 meters high.

What to Do in Guandu Ancient Town? 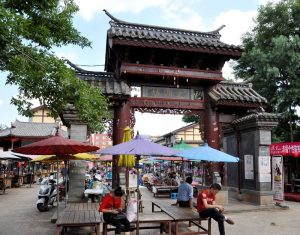 This temple management takeover attracted its share of criticism for commercializing Buddhism, but on a recent visit we found that Guandu Shaolin Temple felt more cared-for than when it was Miaozhan Temple.

We sat down for a cup of tea and a chat with Yan Bei (延贝), the head monk from the Shaolin delegation, who told us that we could study Kung Fu for US$500 per week or US$10,000 per year, not including room and board. Not cheap, but probably worth it for martial arts enthusiasts who would rather learn Shaolin Kung Fu in sunny Yunnan than crowded and polluted Henan.

The majority of interesting things to do and see in Guandu Old Town is located south of Vajra Pagoda. A designated food street on the old town’s east side offers a wide selection of local eats including Rice Noodle(米线), Ersi (饵丝), Shao Erkuai (烧饵块), Yellow Pot Chicken, Stinky Tofu and Barbecued Chicken Feet, as well as food from further afield such as Western Yunnan and Burmese food at Ah Bo’s Burmese Cuisine or Kaili-style Sour Soup Chicken (suantang ji, 酸汤鸡).

The old town is also home to one of the few places keeping the dying tradition of Kunming Opera (滇剧) alive. Gudu Liyuan Theater (古渡梨园) where the high-pitched singing in local dialect – Guandu’s Kunming dialect is considered the most “authentic” in the city – is accompanied by a small orchestra just offstage.

Kunming do not have harsh winter nor hot temple, and is reputed as “Spring City. ” Belonging to the humid temperate type plateau monsoon climate, the average temperature of a year here is around 15℃. With the title of City of Eternal Spring, Kunming is a destination suitable for travelling throughout the whole year. However, the best time to visit Kunming is from March to October. One can find a lot of Yunnan ethnic celebrations during these times in addition to many fruits and blossoms within this period of time. Because of this, visiting within this time will take you the most enjoyment and delight.

Cycling to Guandu Old Town is easy: simply get on Qingnian Lu, ride south until Guangfu Lu and head east until reaching the intersection with 043 County Road/Baoguan Lu, following the brown bilingual signs.

A taxi to or from the city center will run around 40 yuan and is not advised during rush hour.

(1)Nearby: Kunming Luosiwan International Trade City;
(2)Hotels: Hotels available in the Old Town; or you can get back to Kunming downtown the same day;
(3)Food: Eateries and restaurants to suite all wallets there; local delicacies (snacks) are Guandu Baba (pancakes) and Er’kuai rice cakes etc;
(4)Folk Customs: You can choose to experience Guandu Temple Fair held during the Spring Festival; to see how traditional Er’kuai is made in workshops; to see Huadeng Opera and intangible cultural heritage facts etc.
(5)Climate: There is stronger sunlight during the daytime in Kunming, tourists have better take along sunscreen and sunglasses. Also people should drink more water and eat more fruit to prevent dehydration. Kunming has a saying of “Wearing the same in the four seasons” which means that Kunming has the two extremes that the seasonal variation of four seasons are change little or unable to distinguish the four seasons are the wearing characteristics of Kunming. So you can see different season clothing in the street;