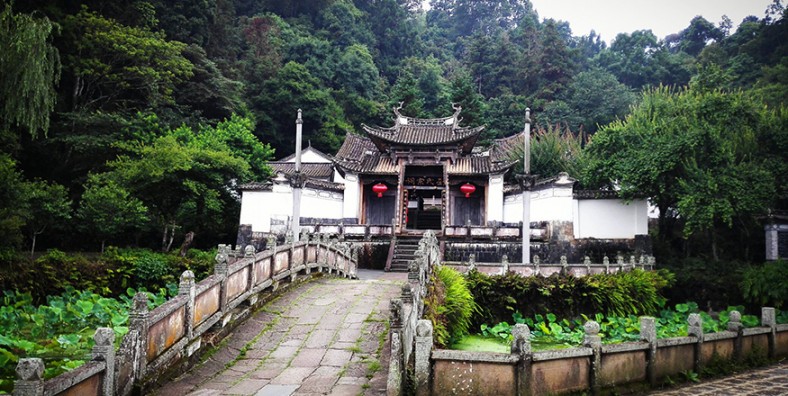 Why is Hehshun Ancient Town?

The houses of Hushun Ancient Town were built in Qing Dynasty, known as the ‘Living Fossil of Chinese Ancient Architecture’. It is also the national AAAA scenic spot.

Where is Hushun Ancient Town?

At the southern end of the Chinese section of the Tea-horse Trail, bordering Myanmar, is Tengchong County, once an important land port in the border areas of Southwest China. Four kilometers from Tengchong is Heshun Township, the birthplace of many well-known Chinese merchants and literators. To the east of the town lies the Hengduan mountain range, which rolls on for hundreds of kilometers, and to the west is Myanmar. Many dormant volcanoes are dotted around the village, and on misty days, their peaks are shrouded in dense cloud.

How to get to Heshun Ancient Town?

Travelers can get to Tengchong by air or long-distance bus. There are mini-bus from Tengyue Town to Heshun Ancient town, 10 yuan per person. Travelers can also take taxi to it. In Heshun Ancient Town, there are cart transferring around different attractions. 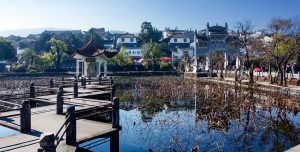 For centuries, Southwest China’s Yunnan Province has been known as home of black tea. It was in the Tang Dynasty, (618 – 907), that caravans began to transport bricks of tea from Xishuangbanna and Simao to India, passing through Yunnan’s Dali and Lijiang and Tibet. The route became known as the tea-horse trail. By the time it had reached India, the tea fermented and turned black. It was then bought by merchants that took it to Europe and other parts of the world.

As many overseas Chinese’ ancestors lived in 600-year-old Heshun, almost every resident in Heshun Old Town has friends and relatives abroad. Neighboring Myanmar is famous for its jade, and Heshan has been a trade center for this precious stone since ancient times. Long caravans would come from Sichuan and other parts of Yunnan and pass through Heshun en route to Myanmar and India where they went in search of jade.

Venturing abroad to engage in the jade trade was often hard and dangerous work, but for those brave enough to try, it was very rewarding and brought about dramatic changes in their lives. Traders who had made their fortunes overseas opened businesses in Shanghai, Hong Kong and Southeast Asia, and built luxurious family mansions in Heshun equipped with new and exotic commodities that they had brought back to their hometown. 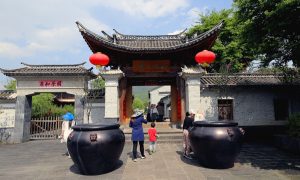 As a small town, Heshun boasts many unique characteristics Its roads are paved with paving stones whose luster after a rainfall bears witness to their antiquity. There is a terrace at the entrance of each alley, with a crescent-shaped screen wall intended to prevent good fortune and wealth from flowing away. A camphor tree usually stands on the terrace, with stone tables and benches beneath.

Clothes-washing pavilions make up another special scene in Heshun. Due to the unique topography in Yunnan Province, its rivers and streams are sometimes calm and at other times turbulent. The local men built a series of pavilions in the town that provide shelter for the women when they wash dishes or clothes in the stream. Women with rolled up sleeves squatting in a pavilion as they wash their clothes in the gurgling stream are a pleasing sight in harmony with their natural surroundings.

The people of Heshun are probably most proud of their library, which boasts a collection of 70,000 books. The biggest township-level library in China, Heshun Library, was built in 1928 of stone and wood, and resembles a college campus.

The library houses over 10,000 rare and ancient books, and scholars travel tens of thousands of miles to see them. Local merchants and Heshun people who had settled in Myanmar funded the building of the library. Heshun people are very studious by nature. They subscribe to newspapers and magazines and keep abreast of domestic and international current affairs. It is no surprise that a whole host of renowned Chinese scholars sprung from this village, like the most famous Chinese philosopher, Ai Siqi(艾思奇）, whose ideas influenced the generations succeeding the mid 1930s. 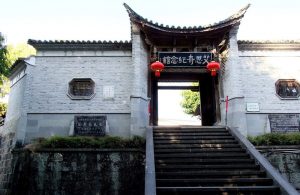 Ai Siqi, formerly known as Li Shengxuan, is a famous modern philosophers of China in his youth. His work had led countless young people to embark on the revolutionary road. The “Ai Siqi Memorial Hall” is lined with a western-style balcony. Enjoying the favorable environment, the combination of Chinese and Western architecture is unique and fantastic.

Strolling the streets of Heshun, you can see many museum-like residences. At the back of the Heshun Library is a huge mansion, formerly the Li household, richest family in western Yunnan Province in the mid 19th century. The family started out trading jade, jewelry and other small trinkets between Heshun and Myanmar. Later the Lis expanded their business and, over the course of a century, set up branches in big cities at home and abroad. Some 200 descendents of the Li family are now scattered across the globe. There is now just one elderly relative who stays in Heshun to keep watch over the old family mansion.

There are three Heshun Baisuifang Archways, which not only represents longevity of Heshun people but also a highlight in Heshun. 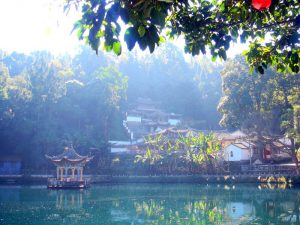 Wenchang Temple is the cradle of Heshun culture. Built in Qing Dynasty, it has been the former site of Yiqun Middle School that was donated and found by overseas Chinese. Nowadays, Wenchang Temple is used to be the Tengchong Shenma Art Museum and the exhibition room for Charming Town.

Yunfeng Mountain is a very popular holy place for Taoists. The holy mountain enjoys admiration from the people of Yunnan and Burma. Many people come here for pilgrimages. The most stunning landscapes in Tengchong can also be found on the mountain.

▪ The Hot Sea and Hot Field

Tengchong is located between the India Plate and Eurasia Plate, where crustal movements are active, earthquakes frequently happen and volcanoes often erupt. There are about 90 conspicuous cones now. Among them, 22 craters remain intact. Around the craters is a combination of scabland, volcanic cinder and volcanic flow, forming a wonderful view- the cluster of volcanoes in Tengchong. 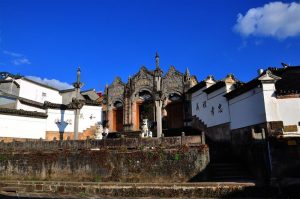 Enjoying the Heshun Ancient Town, the inn located in all corners of the ancient town is the first choice for accommodation. Inns offers the favorable conditions, and the price is usually around 100 yuan, slightly higher in the peak season. You can book in advance on the travel online.

Best Time to Visit Heshun:
Heshun has pleasant weather so that travelers can visit Heshun all year round.