Why is Huating Temple so special?

Huating Temple is located at Xishan Mountain Forest Park in Xishan District, Kunming City, Yunnan Province. Different from other temples, it faces east not south. The temple was frist built in 1063, during Song Dynasty, covering an area of 12,000 square meters in rectangle. The temple is axisymmetric and closed courtyard type. Huating Temple is the largest temple in Yunnan province. It was released as one of the kunming municipal cultural relics protection units.

The History of Huating Temple

The temple was first established by Xuantong Yuanfeng (玄通元峰) in 1320, during the mid-Yuan dynasty (1271–1368). The construction was completed in 1334. In 1339, Xuantong Yuanfeng brought a set of Chinese Buddhist canon to the temple after he visited Jiangnan. At that time it initially called “Yuanjue Temple” (圆觉寺).

In 1969, the Buddhist Texts Library became dilapidated for neglect. It was demolished in the following year.
Huating Temple has been designated as a National Key Buddhist Temple in Han Chinese Area by the State Council of China in 1983.

The architecture style of the Huating Temple is deeply affacted by palace style rule and Confucian culture. Along the central axis of the whole temple, there are Free Life Pond, Hall of Heavenly King, Eight Merit Pool, Mahavira Hall and Depository of Buddhist Sutras.

What to See in Huating Temple 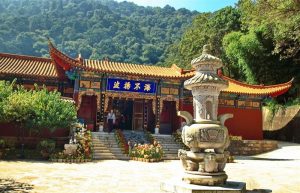 Along the lateral axis from Mahavira Hall, there are scripture hall, ancestor’s hall, abbot’s quarter, Sengtang, living room, bath house, warehouse and so on. And the Mahavira Hall is the center of the temple.

Mahavira Hall: The Mahavira Hall enshrining the statues of Sakyamuni, Amitabha and Bhaisajyaguru. In front of Sakyamuni stand Ananda and Kassapa Buddha on the left and right. At the back of Sakyamuni’s statue are statues of Guanyin and Twenty-four Gods of Heaven. Totally 500 niches with small statues of Arhats are carved on both sides of the bounding walls.

The Bell Tower: The gate of Huating Temple is a high and grand Bell Tower withcornices and old trees there. There is a pool with lots of fish in it. In summer, the white and red lotus are very beautiful in the pond.

Eight Merit Pool: Out of the Heavenly King Hall, you will enter a two layer courtyard, the lower layer is small and exquisite. There is a stone bridge on the Eight Merit Pood which divides the pond into two parts. There are rockery and fishes in the pond. There are also planted wisteria purple, podocarpus, camellia, ginkgo, magnolia. Under the rattan shade, there are stone tables for visitors to have a rest. The upper courtyard stand a giant stone incense burner in the midlle. Incense smoke all day, giving a sense of vulgarity.

What to Do in Huating Temple?

The Huating Buddhist Temple is an ancient Buddhist temple that was originally a retreat for the local ruler. Sitting at the foot of Mount Huating, it is one of the best-preserved Buddhist temples in Kunming. The main temple contains a trinity of gilded lacquer Buddhas seated on lotus thrones. It is characterized by blue hair, august gesture and sumptuous setting.

Tourists can buy a red ribbon in Huating Temple, then make a wish, tie the red ribbon on the tree, pray for the wish to come true.

The temple is famous for its rare flowers and trees. Many camellia, magnolia, sweet-scented osmanthus and others trees were planted in and outside the temple, made the temple the best place to enjoy the flowers.

A taxi to the temple entrance from downtown of Kunming should cost roughly 50 yuan.

1. Visitors are advised to always carry changes of clothing due to the large variations in temperature between day and night.
2. The climate is relatively dry, so drink more water every day.
3 Protecting oneself from strong UV radiation at high altitude.
4. Protecting oneself from altitude sickness. Lessen the effects of altitude sickness, avoid strenuous exercise and have plenty of rest.
5. Respect local customs , habits, and religious beliefs.