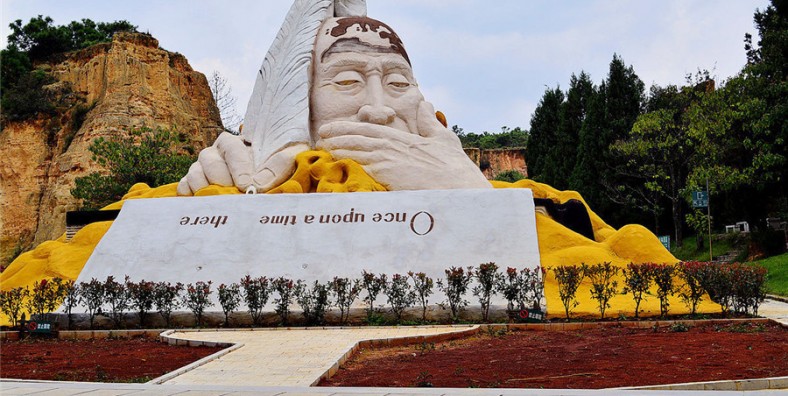 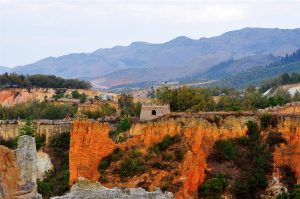 Luliang is famous for its rich colored Sand Forest. The International Sand Sculpture Festival is held at the end of March, right after the Chinese New Year, although accommodation is at a premium then. One of the delights of a visit to Luliang is the opportunity to admire, and buy sand art crafts. A sand painting is a distinctive object, based like so many things in the Boyi community, on century old traditions.

From the provincial capital Kunming, take the 324 national freeway and drive just 128 kilometers to reach the Luliang Sand Forest. The Sand Forest was formed thousands and thousands of years ago while this landscape used to be an ocean. The current attraction covers an area of about six square kilometers.

Unlike the common beach sand, the Luliang Sand Forest is a combination of sand and stone that cumulate as prominences and mounts. The glory of reflection from the sunshine reproduces a magnificent view of its distinctive character quite like the Stone Forest, but a finer version. The Colourful Sand Forest in Luliang is a national tourist resort at the AAAA level. 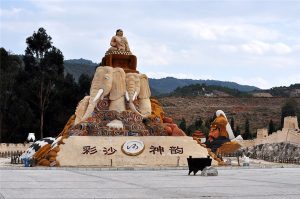 Vivid colored sand hills represent the outstanding quality of Luliang natural resource. This year, the sand sculpture festival committee allows the participants to use other techniques including light, sound, fire and smoke to express the greatness of art works. For instance, one of the statues contains a sound sensor that plays an introduction announcement when visitors appear. Another sculpture arranged lighting affects that reproduce the film scene of Harry Patter with the mysterious story.

The whole Sand Forest looks like a Y. It covers an area of about 6 kilometers. The main tinges here are yellow, white, red and grey. The Colourful Sand Forest came into being about 340 million years ago. It was a physiognomic wonder resulting from the gradual influence of the impacts of earthquakes, the ejection of the magma, the movement of the earth’s crust, and the erosion of the wind and rain. It is also a whole consisting of all kinds of sand posts, sand peaks and sand screens. In addition, engraving with sand will sure give you a different feeling.

In the Colourful Sand Forest, you can not only enjoy the beautiful natural sights, but also visit the basso-relievos representing the ancient Cuan culture, play with sand carvings and watch the performances of local folk customs.

How to get there
It is 143 kilometers from Kunming to the Colourful Sand Forest. You can take the passenger cars going to Shizong, Luoping and Xingyi and get off at the crossing of the Colourful Sand Forest. The price is 15 to 20 yuan per person. The crossing is still 2.5 kilometers away from the scenic spot, and you have to walk or hitchhike there.

Tips
Since the year 2001, the International Festival of Colourful Sand Carvings and the Contest of Sand Carving have been held for three years running in Luliang, and each has a unique topic. People show all kinds of historical stories and characters in the masterpieces through sand carvings. If you are interested, you can find a patch of sandlot and do the carvings yourself. The works of the sand carvings are usually exhibited from the April to the end of October each year.