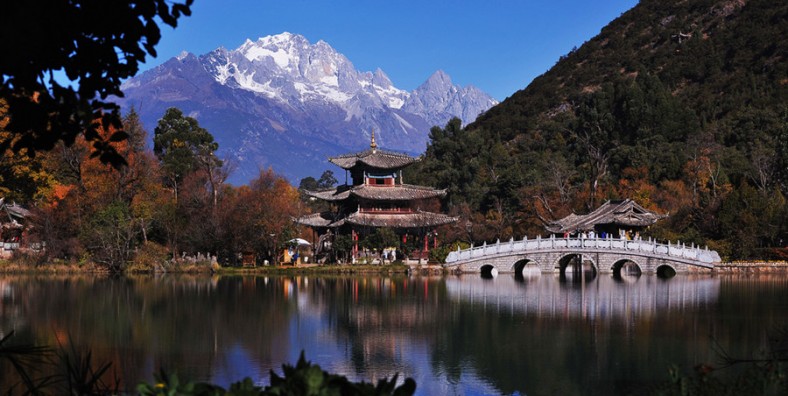 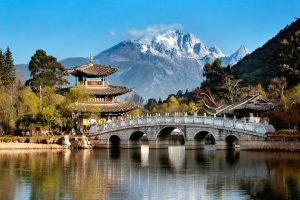 The Black Dragon Pool is like an ancient architecture museum. Some of the famous buildings were established suburbs have under protection actually collected from other places. People moved the traditional buildings that almost had been ruined here and let them be protected. Among them, the most famous buildings are the Villa Jietuolin of the King Mu and the Five Phoenixes Tower combines the typical Lamaism plane pattern and exquisite wooden structure of the Naxi architecture. Both the frame and the technology are unprecedented. The buildings can rarely be found even in the world of Chinese architecture.

The Black Dragon Pool’s distinguishing feature caters to the habituation of the Naxi who loves nature very much. In the past, it was a good choice for people form the Old Town to go picnicking. They gave themselves a good reason for picnic when they came to thank the blessing of the gods. They took all kinds of delicious food, wine and their specially made hotpot here and gathered together to enjoy the happy and relaxing life.

Where is Black Dragon Pool

What to See in Black Dragon Pool

Now Black Dragon Pool buildings are divided into up and down two Taoist temples. Down temple “Black Dragon Palace”, which was said that built in 1454, was a type of building with one hall with two enclosed courtyards. Outer courtyard had a censer, engraved with eight diagrams, on both sides are the big dipper figure, these are the Taoism used to ward off evil spirits. In the inner courtyard patio pool there is a vivid paddled black dragon carving. Legend has it that it is the Du Dragon King in charge of Yunnan clouds and rainfalls.

In front of the Black Dragon Palace is the pool. Two pools in the front and back are interlinked, separated by a stone bridge in the middle. On the left is the muddy pool, it is the area of 2600 square meters, the depth of the water up to 50 centimeters.

On the right is the clear pool, with 600 square meters, the average water depth is 7 meters and the deepest can up to 11 meters, storage capacity of 4400 cubic meters. It is Black Dragon Pool. Two pools connected to the water, and due to distinct color of water, it looks like a Taoist diagram of the universe. This is mainly because the clear pool is deep, springs come out by the pool bottom, so the water is clear; And muddy pool water is shallow and have mud into the pool after raining along the hillside, so the water is muddy. Standing on the bridge can find a rare sight: “there is no interaction of fishes between two pools, a bridge cut the water from two pools and the colors in two pools are different.”

▪ Dragon Shrine
Dragon Shrine is the main building of Black Dragon Pool, including stage, Deyue Building (Getting Moon Building), distributed on the axis line. Dragon Shrine faces west, it is a type of building with quadrangle courtyard and two patios, and there is gate, two wing-rooms and hall. The hall is single eave hipped-gable roof, three rooms wide, in the front is platform, and verandas surrounded are connected.

Legend of the Black Dragon Pool 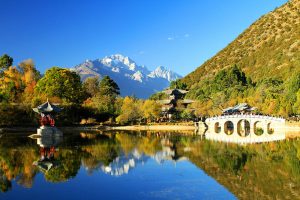 The Black Dragon Pool takes its name from an ancient legend. It’s said that once upon a time there were ten evil dragons that terrorised the land. Lu Dongbin, one of the Eight Immortals of Chinese legends, jailed nine of the dragons in a tower, leaving only the youngest black dragon. The black dragon was forced to protect the land to keep its freedom, and still lives in the pool today.

The Black Dragon Pool is divided into two parts by a white marble bridge, and despite the water being connected, the sides maintain different colours and the fish on either side refuse to swim to the opposite pool. Additionally, Black Dragon Pool has never dried up, even during the worst droughts.

Distances from Other Scenic Area in Lijiang

How to get to Black Dragon Pool

First of all, you need to get to Lijiang, and then you can take bus there.

There are fights linking Lijiang and Kunming, and also direct flight from Shanghai to Lijiang. For a detailed schedule and fares of the flights, refer to the table at the bottom of the page. In peak season, there are be extra flights and schedules may alter accordingly.

Lijiang airport is a fair distance from the city center, about 28km east. There is a RMB20 road tax to the airport, and a taxi to the airport takes about 40 minutes and costs about RMB75-80.

There is no public bus to or from the airport. Upon arrival, there are a few transfer services to the city but the service is very unreliable. From the city, an infrequent airport shuttle bus leaves from the Guanfang Hotel. The best thing to do is to check with the hotel and the airport about up to date public transport information.

The biggest bus station is at the Intersection of Mains Lu and Changshui Lu. The main bus station has both Gaokuai (express) and normal buses.

Normal buses to Kunming are usually night sleepers, there are several of these and the trip costs RMB115 and takes 10 Hours.

Mini buses to Zhongdian are available. There is one bus an hour between 7am and 3PM.

There are smaller bus stations in the town: among these, the biggest is at the old Guluwan Hotel on the northern end of Xindajie, opposite Mao’s square. From here buses run to Zhongdian, Qiaotou and Shigu. Buses to Dali and Kunming can also be found here.

The other sub-stations are at the Yuquan Hotel (Jade Spring) and The Lijiang Hotel.

There is an express bus station (for fast buses only) on Shangri-la Dadao opposite the Guanguang Hotel (Tel: 5183758). 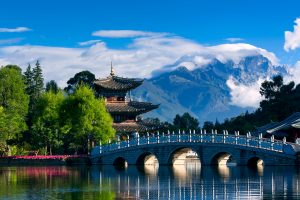 From May to November is the best time to visit Black Dragon Pool, people can see mountain flowers in full bloom in summer, enjoy the fresh air and clear sky in autumn. Autumn is also the most beautiful season in Lijiang, moderate temperature, clear sky and crisp air, colorful trees and flowers, silhouetted against Jade Dragon Snow Mountain far away.

1. Pay attention to safety and take care of the kids and olds while paddling at the pond.

2. In the cloudless weather, you could overlook the Jade Dragon Snow Mountain from Black Dragon Pool.

3.Ticket for Black Dragon Pool: It is free to get into but travelers should show the receipt of Mantenance Fee for Lijiang Old Town. While it will open after 7:00 pm and close before 9:30.