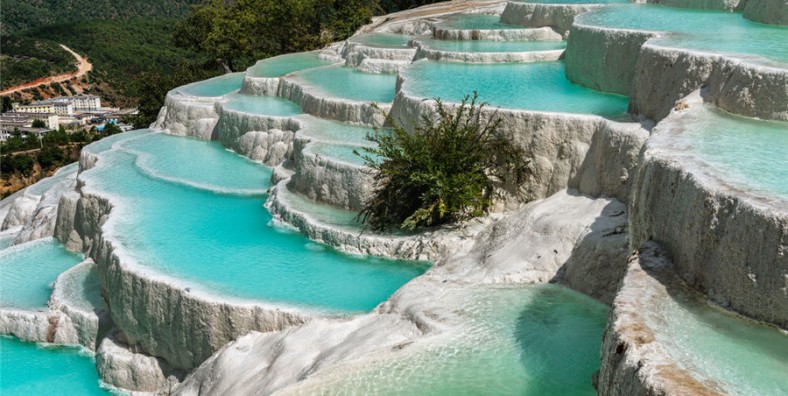 Baishuitai is a natural feature and tourist attraction in Shangrila County, Yunnan, China. It means white water terraces. The main attraction in the area is a large, white mineral deposit in the form of terraced pools. It is described as the largest feature of its type in China.

Why is White Water Terrace (Baishuitai) So Special？

Baishuitai or Baishui Tableland, also named the White Water Terraces, is known as one of the most attractive destinations in mysterious Shangri-La and is an ancient Chinese landform with a history of 200,000 to 300,000 years. The main attraction in the area is a large, white mineral deposit in the form of terraced pools, formed by calcium-rich water emanating from springs at the top of the formation. It is described as the largest feature of its type in China.

Covering an area of three square kilometers (about 741 acres), Baishuitai is located in the foothills of the Haba Snow Mountains, 101 kilometers (about 62 miles) southeast of the Shangri-la County. The specific location is Baidi Village, Sanbei Town, Shangri-La City, Yunnan.

Legend has it that the first saint of the Dongba Religion was attracted by the fascinating scenery of this place on his way back from studying Buddhist sutras at Tibet. So he settled down to preach Buddhism and the White Water Terraces became known as the Holy Land of the Dongba Religion.

Another says that in order to make local Naxi people learn to cultivated land, two Gods made the pieces of terraces for them and there is a saying of “Terraced Fields Left by Immortals”. 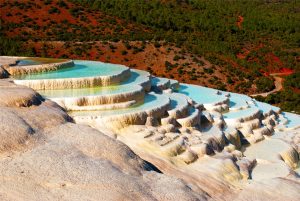 As early as Tang and Song dynasties, Baishuitai has already become a famous tourist resort in western Yunnan.  In the north of the origin source stands a rock, on which a poem created by Mugao, a Naxi magistrate of Ming dynasty is inscribed.

Baishuitai is called “Shi Bu Zhi” in Naxi language which means growing flower. It is the birthplace of the Dongba culture of the Naxi Minority Group. The terraces are associated with the founder of the local Dongba religion, and are credited with teaching the local Naxi minority people how to adapt the region’s hillsides for agriculture. As such they are an important local pilgrimage site, and there are several shrines in and around the terraces. Each year, on the eighth day of the second lunar month, the Naxi people will gather here to celebrate their traditional festival by singing and dancing all day and night.

How to Get to White Water Terrace (Baishuitai)?

At Shangrila Bus Station, there are two buses running to Baishuitai(Sanba Township)  in four hours individually in the morning and afternoon and there will be more shifts during holidays and Sundays. Tourists can get off at Baidi Village.

From Hutiaoxia Town, there is also one bus running to Baishuitai at 14:00 pm and arrive at Walnut Garden at 14:25 pm. The Tiger Leaping Gorge hikers can take the bus to Baishuitai.

Renting a car to Baishuitai in Shangrila is also available. Yunnan Exploration Travel can provide this service for you.

What to See at White Water Terrace (Baishuitai)? 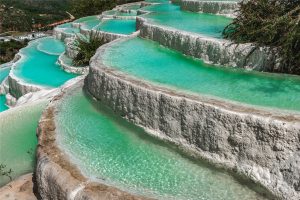 The main attraction in the area is a large, white mineral deposit 140m long and up to 160m wide in the form of terraced pools, formed by calcium-rich water emanating from springs at the top of the formation. It is described as the largest feature of its type in China. Spring water gushes down the crystal terrace like a white waterfall from the mountains summit, while the ever thickening sodium carbonate creates the impression of a marble sculpture, which makes a startling contrast to the green mountain. It were formed over thousands of years, just like terraced fields, layer upon layer, thus the name of Bai Shui Terraces.

From February to April and from September to November is the best time to visit White Water Terrace. Each year, on the eighth day of the second lunar month, the Naxi people will gather here to celebrate their traditional festival by singing and dancing all day and night. The scenery of the White Water Terrace is beautiful in spring, summer and autumn. Although the water quantity is not large in winter, it is glittering and translucent in the morning when the sun shines. While the summer is the rainy season with bad road condition, with debris flow and rockfall, so be caution. 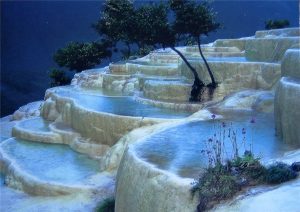 The town near the entrance has several guesthouses which can provide accommodation and meals. You could also consider staying in the county seat or Hutiaoxia Town.

Haba Snow Mountain is a mountain rising above the northwest side of Tiger Leaping Gorge in Yunnan, China. It rises opposite the higher Jade Dragon Snow Mountain, and towers 3,500 metres above the upper reaches of the Yangtze River(Jinsha River). The summit of the mountain is a popular destination for amateur mountaineers and its lowest slopes are crossed by the popular Tiger Leaping Gorge trail. Its massif is considered the southernmost extent of the expansive Shaluli Mountains, themselves a component range of the Hengduan Mountains.

Being one of the most bio-diverse regions in China’s Yunnan Province, Pudacuo National Park is the first national park in Chinese mainland which was announced on June 25, 2007. With its crystal-clear lakes, undulating mountains and gurgling streams, Pudacuo National Park is definitely a wonderful natural wonderland. Among China’s 2,500 nature reserves, Pudacuo is the only one meets the standards for national parks established by The World Conservation Union. In addition to its rare vegetation and mammal species, the stunning natural beauty of landscape is unmissable for visitors as well.

► To protect the calcification spectacle, please do not tread on them.

► Tiger leaping gorge (lower section) is on the way from Baishuitai to Shangrila, you can visit by the way.

►Every eighth day of the lunar calendar is the best time to visit Baishuitai for the sacrificial activity.

14 Days Yunnan Cycling Tour from Shangrila to Lijiang and Dali