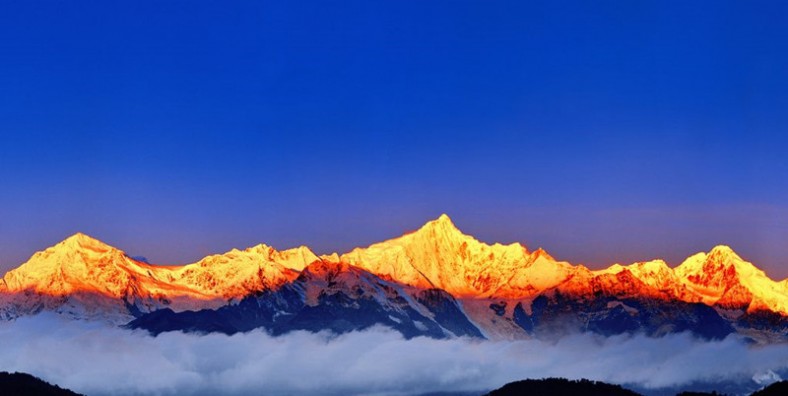 Kawagarbo is the high point in a range of high peaks that are generally referred to by Tibetans also as Kawagarpo. It is widely recognized as the most beautiful snow mountain in the world, and is honored as the "god of snow mountain".

Best Time to Visit: From October to May of the following year

Location: on the border between Deqin County, Yunnan, and the counties of Zogang and Zayv of the Tibet Autonomous Region

Why is Kawa Karpo Peak So Special?

Kawagarbo is the high point in a range of high peaks that are generally referred to by Tibetans also as Kawagarpo. Kawagarbo is one of the most sacred peaks in the Tibetan world and is often referred to as Nyainqenkawagarbo to show its sacredness. It is widely recognized as the most beautiful snow mountain in the world, and is honored as the “god of snow mountain”.

Where is Kawa Karpo Peak – Location

It is located on the border between Deqin County, Yunnan, and the counties of Zogang and Zayv of the Tibet Autonomous Region. It rises about 20 kilometres (12 mi) west of Shengping (升平镇), the seat of Deqin County, which lies on China National Highway 214. What is now Deqin County has been part of Yunnan since the 1720s, when the current border with Tibet was established by the early Qing Dynasty.

A mapping error by the Chinese army during the 1950s transcribed the name for a lower range of mountains to the north on a much larger area that also included Kawagarbo. The name of this lower range in Tibetan is Menri, but is most widely known by its Chinese transliteration, Meili Xue Shan or Meili Snow Mountain. This is the name most widely applied to the range by Chinese and Western sources. The Meili range is a small massif of the much more extensive Hengduan Shan, the major north-south trending complex of mountains lying along the eastern edge of the Tibetan Plateau in eastern Tibet, northwestern Yunnan, western Sichuan, and far northern Myanmar. The Meili Xue Shan forms part of the divide between the Salween (Nujiang) and Mekong (Lancangjiang) rivers. 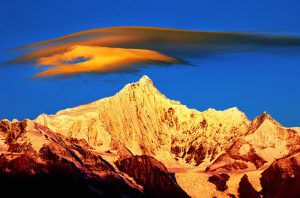 Kawagarbo is one of the most sacred mountains for Tibetan Buddhism as the spiritual home of a warrior god of the same name. It is visited by 20,000 pilgrims each year from throughout the Tibetan world; many pilgrims circumambulate the peak, an arduous 240 km (150 mi) trek Although it is important throughout Tibetan Buddhism, it is the local Tibetans that are the day-to-day guardians and stewards of Kawagarbo, both the deity and the mountain.

The ancestral religion of the Kawagarpo area, as in much of Tibet, was Bön, a shamanistic tradition based on the concept of a world pervaded by good and evil spirits. Bön encompassed numerous deities and spirits which are still recognized today, and are often connected with specific geographical localities and natural features; the major mountain peaks in the Hengduan Mountains are thus all identified with specific deities. Kawagarbo is one of these. Since its introduction, Tibetan Buddhism has been the dominant religion of the Kawagarbo area, with followers of Gelugpa doctrine being the most common.

Tibetans believe the warrior god will leave them if human sets foot on the peak of Kawakarpo, making the ground unholy. Disasters will follow as they lose god’s protection. Tibetans have also established a centuries-old sacred geography around the peak, maintained by religious leaders from local monasteries in negotiation with local villages. This sacred natural site preserves the natural resources and ecological health of the range. 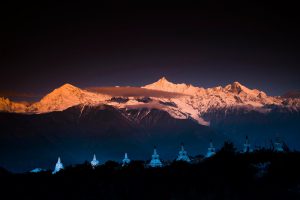 1987: The first attempt on Kawakarpo was made in 1987 by a party from the Joetsu Alpine Club of Japan.

1990–91: In the winter of 1990–91 a group from the Academic Alpine Club of Kyoto University attempted the peak in conjunction with a Chinese group. Their activity caused heavy protests from the local Tibetan community due to the mountain’s cultural and religious significance. On 3 January 1991, a nighttime avalanche killed all seventeen members of the expedition, in one of the most deadly mountaineering accidents in history. The Kyoto club returned in 1996 to make another unsuccessful attempt.

2001: In 2001, local government passed laws banning all future climbing attempts on cultural and religious grounds. As of 2010, none of the significant peaks of the range have been successfully climbed.

►By plane: Fly directly to Shangri-la city (Zhongdian), and then take a local bus to Feilai Temple in Deqin County, which is the best jumping off point to view Kawa Karpo Peak of Meili Snow Mountain.

►By scheduled bus: There are regular bus routes to Feilai Temple from a number of nearby destinations: Kunming, Dali, Lijiang (albeit, via Shangri-la), and Shangri-la itself.

To take the full view of Kawakbo, there are two good locations: Feilaisi observation deck and Thirteen Pagodas Welcoming Guests.

Yubeng Village in Deqin County, Shangrila
Yubeng is a secluded small Tibetan village tucked away at the foot of Meili Snow Mountain in Deqin county, the northwestern corner of Yunnan Province. It is only accessible by foot or horse/mule. But the trip, however arduous, is worth it. Yubeng is divided into an upper and a lower section. Both parts offer fabulous views of the Mei Li Snow Mountains. Lower Yubeng is smaller, quieter and closer to the lakes and waterfalls that you will likely visit during your stay.

Lancang-Mekong River Grand Canyon
It is called the Lancang River after it reaches Changdu. The river runs south until it leaves China at the Nanla Bayout of Yunnan Province and therefrom changes its name from the Lancang River to the Mekong River. The river finally empties into the Pacific Ocean in the south of Ho Chi Minh City of Vietnam.

►  It is difficult to see the mountain in its entirety during summer and autumn, due to heavy cloud cover or mists.

► The ultraviolet rays are strong and you may need to bring something anti-sunburn.