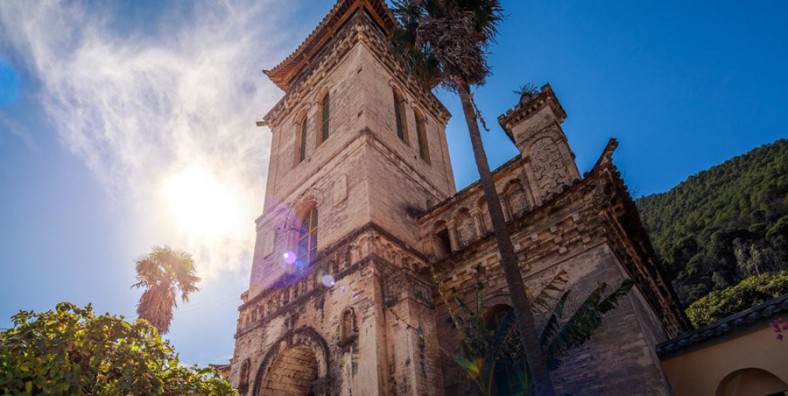 It is a French Catholic church, first established in the 6th year of Tongzhi in the Qing Dynasty (A.D.1867). The church is constituted with French buildings and Chinese pavilions, special in architecture. It is one of Yunnan's most important churches.

Location: Cizhong Village 80 kilometers from the south of Deqin County of Yunnan province

Why is Cizhong Catholic Church So Special?

Cizhong Catholic Church is a model which combines the architecture features of both western countries and China’s Tibet, Han and Bai ethnic groups. The church and its wing-room, gate, cellar and grape yard were well preserved by local government. It was listed as the key national cultural protection relics by the State Council in 2006.

Where is Cizhong Catholic Church – Location

The Cizhong Catholic Church is located in Cizhong Village of Yanmen Township, 80 kilometers from the south of Deqin County in southwest China’s Yunnan Province.

Cizhong Catholic Church was first constructed at Cigu Village in 1867 (the 6th year of the Tongzhi Reign in the late Qing Dynasty), and was torched to ashes in 1905 during the Movement of Expelling Western Religions; it was reconstructed from 1909 to 1921, employing a great deal of labor, quantities of materials and huge amounts of money. It is a model which combines the architecture features of both western countries and China’s Tibet, Han and Bai ethnic groups. Once the church was reconstructed, it became the major church of the Yunnan Parish; and a school and convent were built with it successively. Nowadays, its former houses and dormitories have been preserved and undergone renovations sponsored by the Government in 1989. It was listed as the key national cultural protection relics by the State Council in 2006. 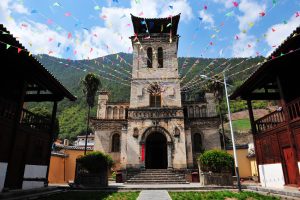 At the bus station of Deqin County, there are coaches running to Cizhong Church. Or tourists can rent a car to from Deqin or Feilaisi.

Cizhong Church complex is set on the mountainside with lush vegetation and companied by local residences, thus presenting peculiar views of culture and nature. The church complex is centering on the church while compactly fitted with gate, front and back yards, garden of flowers and vegetables, cellar, and vineyard etc, all of which contribute much to its grandiosity. Facing eastwards, Cizhong Catholic church is mainly constructed with brick and stone structures of French (Gothic) style; and its profile goes on a cross basis. At the entrance is a girdle-free stony staircase, 1.3 meters high; the arched porch is made of slab stones and is 6 meters long and 3 meters wide; above the porch is a three-storey belfry (watchtower), 20 meters high. The upper part of the belfry is a pavilion style with wooden pinnacles, employing 4 inner pillars and 12 outer pillars to support the ridge beams; and banisters are further built between the inner and outer pillars. When being in the watchtower, one gets the chance to have a bird-eye view of Cizhong Village and enjoy as well the sceneries in the mountains around.

The gate is composed of a couple of plank doors both of which are 2.72 meters high and 0.74 meter wide. The nave (or the chapel) is 22 meters long and 12.7 meters wide; there are 6 stone columns in two rows supporting the ridge; on the two sides of the navel, a vestry and bathroom are set respectively. The roof of the church is made from glazed tiles, so this grand building looks extremely seductive under the sunshine. 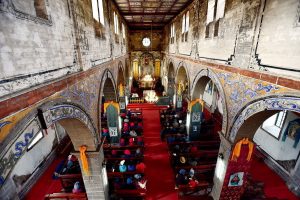 Inside, the church is quite austere, but for its ceiling which is painted in different shades of blue and decorated with a mixture of floral and Taoist motifs. Naive paintings showing the different stages of the Way of the Cross hang from the walls with Chinese characters underneath, telling the story. The church benches, which are raised no more than 20 centimetres from the floor, are uncomfortably low for Westerners, unused to squatting, and the sight of the prayer books in Chinese lining them seems incongruous to our eyes.

The Feast of the Assumption in August and the Christmas in December are the most lively times for the Cizhong Church. Villagers, whether religious or not, flock to the church to participate in the activities. Every year in the mid-September, the villagers start to make wine. If you like, you can taste the new wine at this time. If you come on Mondays, Wednesdays and Fridays, you will also experience mass. 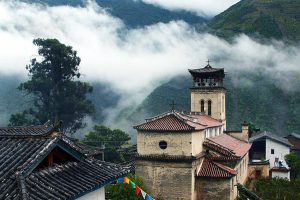 In the past, the church was able to accommodate tourists, but due to the poor living conditions, it is cannot provide commodation for tourists. So tourists can choose the hostels and inns around the church in Cizhong Village or back to Deqin for overnight.

►The church has a large vineyard and the villagers have their own wine. Tourists can have a taste if interested.

► There is no ticket for the church, but you have to pay RMB 10 to get to the top of the building.