The Upper Section of Tiger Leaping Gorge (Shangrila Side) 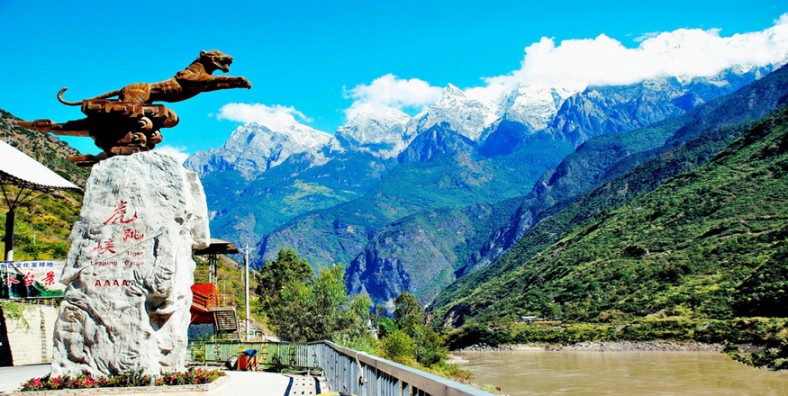 The upper gorge is 9 kilometers from Tiger Leaping Gorge Town, and its degree of difficulty is the lowest one among the three sections and most tourists prefer to visit because it’s a safer tourist site built by the authorities with available road, wooden steps, secure guardrails and short distance.

Distance from Downtown: 120KM from Shangri-la

The Tiger Leaping Gorge is famous for its steepness, one of the deepest gorges in the world and sits between Haba Snow Mountain sitting in the north and Jade Dragon Snow Mountain in the south. The gorge consists of three parts: the upper section, middle section and lower section. The hiking route of Tiger Leaping Gorge is depicted as one of the top 10 classic hiking routes all over the world. 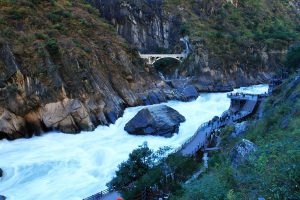 The upper gorge is 9 kilometers from Tiger Leaping Gorge Town, and its degree of difficulty is the lowest one among the three sections and most tourists prefer to visit because it’s a safer tourist site built by the authorities with available road, wooden steps, secure guardrails and short distance.

The most narrow part of the whole Tiger Leaping Gorge sits in the upper section. There is a huge stone in the middle of the river and the water is rushing, which leads to a shocking scene with great wave. It’s said that a tiger leaps to the Haba Snow Mountain from Jade Dragon Snow Mountain by stepping on the stone, so it’s named as “Tiger Leaping Stone”.

What to Do at Upper Section of Tiger Leaping Gorge

The Upper Tiger Leaping Gorge is a paradise for hiker. Travelers need to hike for two hours to Naxi Family Guesthouse and have lunch. Continue to hike another 2 hours up the steep wending gorge called 28-bends before the next break. It’s said by travelers 28-bends is the highlights of the Upper Tiger Leaping Gorge and the view from the First observation deck is indelible. After a break, hike another one or two hours, and then we will arrive at Halfway Guesthouse where travelers can enjoy the great view of Yulong Snow Mountain and overlook the Jinsha (Golden Sands) River Valley.

How to get there

By Bus
There is a bus departing from Zhongxia International Youth Hostel(中峡国际青年旅舍) at 8:00am in Shangri-La for Tina’s Guest House（中峡客栈） via Qiaotou Town(桥头镇) with the fee for 50RMB per person. Hikers can get off the bus at the park lot in the Upper Section of the Tiger Leaping Gorge. The buses depart from Tina’s at 3:00pm for Shangri-La with the fee for 50RMB per person. 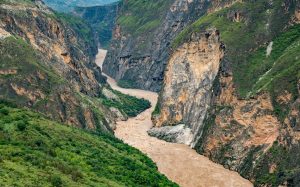 Haba Snow Mountain
Haba Snow Mountain is a mountain in southeast of Shangri-La, rising above the northwest side of Tiger Leaping Gorge, opposite off Jade Dragon Snow Mountain, with the highest peak of 5,396 m. It boasts glaciers, lakes and waterfalls and contains one of the best preserved nature reserves. Each year from June to August, millions of azaleas are in blossom. To avoid the rainy season, the best time to travel Haba Snow Mountain is mid-March to June, mid-September to mid-December.

► It’s rainy season from July to September, Please pay attention to some clastic rock rolling down from the mountain and don’t get too close to the river with water surging.

► It’s dry season from December to February, strong wind or flocks of sheep may bring about the clastic rock. Get perpared before hiking.

►Sun creams are MUST to prevent from the strong sunlight.

Map of The Upper Section of Tiger Leaping Gorge (Shangrila Side)