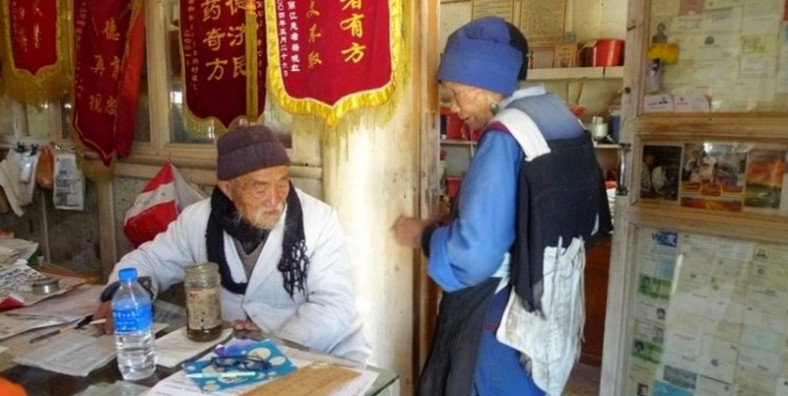 He Shixiu (1923 – 2018), a famous Naxi doctor, is known as one of the “three outstanding doctors of Lijiang”. The Ethnic Times calls him “A Wonderful Naxi People” and many overseas Chinese newspapers call him “Miracle-working Doctor around the Jade snow mountain area”. On August 31, 2018, he died peacefully at the age of 97.

He Shixiu was admitted to Shanghai Naval Machinery College for science with the outstanding achievement of Lijiang Top Scholar. Later, due to physical reasons, he transferred to Nanjing Foreign Language College and graduated in 1949.

In 1949, he joined the Second Field Army of the Chinese People’s Liberation Army, and later returned home for recuperation due to tuberculosis. After returning home, He Shixiu inherited his father’s career, carefully studied medical books, collected folk Chinese herbal medicine prescriptions of Naxi nationality, and became a doctor after a long illness, making him a little famous herbal medicine doctor. During the Cultural Revolution, He was criticized ,and after the Cultural Revolution, he was hired to teach English at Lijiang Diqu Middle School and Lijiang Finance School.

In April 1985, He Shixiu’s “Yulong Snow Mountain Herbal Clinic” finally opened. Over the past 30 years since its opening, numerous people have been treated by He Shixiu. In his words, “My patients come from all over the world, but I would rather they were just guests, not patients.”

In March 1986, The World of Locke, written by the famous British writer Bruce Chatwin, was published in the New York magazine the Times. It reported the “Snow Mountain Herbal Clinic” of He Shixiu. Later, Blair’s recovery from leukemia in the United States was reported. The sensational effect of this news has made the domestic and foreign media continue to report on He Shixiu.

It is reported that He Shixiu has received interview invitations from more than 150 media, covering the world in nearly 40 languages, including CCTV, NBC, Time, BBC and other international well-known media. He has even been visited by the queen of the Netherlands, the royal family of the United Kingdom, Canada, the United States, Switzerland and other global dignitaries and celebrities. Of course, there are also celebrities from various countries, film and television stars. His stories were selected and included in the international celebrity dictionary and international 500 celebrities by IBC and ABI.

“Because I’ve been seriously ill and know the pain of patients, all I can do is to make them less painful and stressful. It is my original intention to seek medical treatment with virtue.” He Shixiu said.