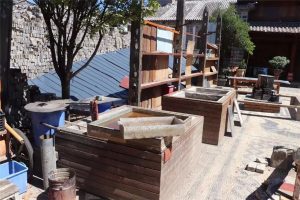 The Dongba paper of the Naxi Ethnic Minority  is unique for its special paper-making craft,which is practiced in a village called Baidi Village(白地村) of Sanba Naxi Township(三坝纳西族乡), Shangri-la County(香格里拉县), Diqing Tibetan Autonomous(迪庆藏族自治州).Dongba paper also known as a “living character fossil” ,which  is mainly used to record Dongba scriptures,but also remains extremely valuable for research on paper-making in China.

Baidi(白地), or Baishuitai(白水台),is where the Dongba culture of the Naxi ethnic group originated. The Dongba paper is also called the Baidi paper. Baidi paper is the most important paper in Dongba Scripture writing, and has long been famous in Northwest Yunn. 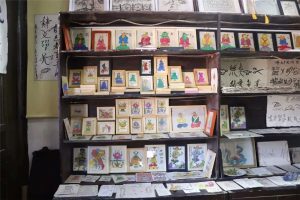 Dongba paper is special because it’s made from canescent wikstroemia, a local plant. Traditionally, to make Dongba paper, one had to boil cortexes, rinse, pestle and air the plants. Made with original tools and methods Dongba paper is mothproof and resistant to natural erosion.The production of Dongba paper must be strictly kept in the home, which hinders the possible industrialized production of the paper.The whole process comprises gathering materials, soaking, stewing, beating, stirring, calendering, sun-drying and so on.

The paper made by Baidi Dongba is white, thick and easy to write scriptures. Because the materials of paper making are toxic, the paper is not moth-eaten and can be preserved for a long time. The Naxi ethnic group believes the Dongba papermaking handicraft must be passed down to sons, instead of daughters.