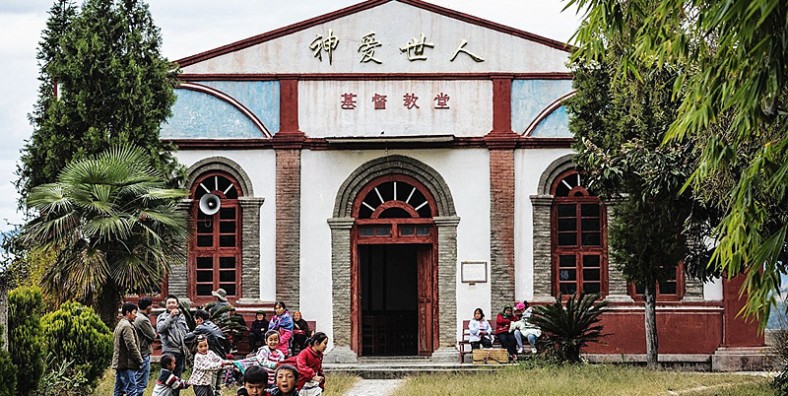 Laomudeng Church in Fugong County is the biggest Christian Church in Nujiang Grand Canyon in Northwest Yunnan. It is a best Nujiang tourist site, where you can experience christian church integrated with local Nu ethnic culture.

Why is Laomudeng Church So Special?

Laomudeng is the word of Nu Ethnic People which means a place where people are longing to stay. It is the largest church in the Nu river valley. Black brick wall, red lacquer and wood window, tin roof, simple and plain, which shows the purity and piety of people’s faith.

Where is Laomudeng Church – Location

Laomudeng church is located at the Laomudeng Village, Pihe Town, Gongshan County, Nujiang Lisu Autonomous Prefecture, northwest of Yunnan province. It is on the valley of Nujiang River.

Christian churches in the Nujiang river area were all made by French missionaries. As early as 1902, French missionaries began to cross the Biluo Snow mountain from Cizhong, arriving at Nujiang river area to preach and established a number of churches. Laomudeng church is the largest one of them. From the outside, the church is not spectacular, with no familiar glass windows, domes, and iconic gothic spires, or even instruments like an organ.

Local Nu ethnic members, who live on the Nujiang River banks, have gotten used to doing service in Christian churches established by Western missionaries in the past. In Nujiang Canyon, where many ethnic groups-such as the Nu, Lisu, Bai, Han and Tibetan-share the same Christian belief, a variety of religions go compatible including the primitive religion, Dongba Religion and even Tibetan Buddhism. 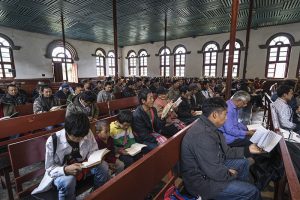 There is no shuttle bus in Laomudeng village, we just can take local mini-bus to get to Laomudeng Church, the price is negotiable.

Laomudeng Village:
In the village, there are more than one thousand residents and Nu people takes up 95% of all. Because Nu people don’t have written language, most of their records are written in the language Lisu people which is another ethnic group living in Nujiang Prefecture.

Nujiang Great Canyon:
The Nujiang (Nu River) Great Canyon is a spectacular 315 kilometre long marvel of nature in northwest Yunnan province in southwest China. The Chinese call it the Grand Canyon of the East.

· There are quartet chants in Laomudeng church on Wednesdays and Saturdays which you can’t miss.