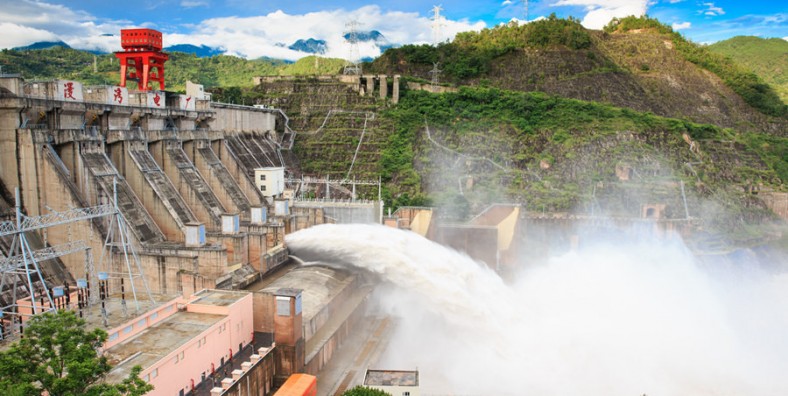 The Lancang river is about 2,100km long, with a total drop of about 5,000m and a catchment area of 174,000km2, of which 1,240km with a catchment area of 91,000km2 is in Yunnan Province. In accordance with the river development planning two large reservoirs and eight cascade hydropower stations are to be constructed on the middle reaches of the river. The Manwan Hydropower Station is the 6th one and  Xiaowan hydropower project will create a large reservoir on its upstream.

The main purpose of the Manwan hydropower project is to generate electricity. The project which is classified as grade 1 in terms of its size and importance is constructed in two phases. Its total installed capacity is 1,500MW including 1,250MW in the first phase and 250MW in the second phase. All five generating units in the first phase were put into operation in June of 1995. An underground diversion type power station is to be constructed on the right bank in the second phase, whose intake is arranged about 180m upstream from the Manwan dam.
The commissioning of the Manwan Hydropower Station plays an important role in the development of the national economy in Yunnan Province, development of the Lancang River, implementation of the strategy of ransmitting electric power to other provinces and abroad from Yunnan as well as development of the electric power industry in Yunnan Province. 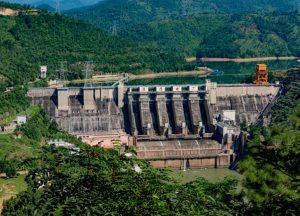 The flood releasing structure of the Manwan hydropower project consists of 5 crest spillway , 2 low-level  outlets and 1 tunnel spillway . The structure featured with frequent operation, large discharge, high energy, long duration and energy dissipation by river bend during the flood period. The crest spillway 1# through 5# are installed between the sections 9# and 14#. The maximum discharge of each crest spillway  is 2,405m3/s (at the design flood level, the same below). The two low-level  outlets, one long and the other short, are located in the section 15#, with their maximum discharge of 2,436m3/s. The  tunnel spillway is arranged in the left bank , with a maximum discharge of 2,344m3/s. The five crest spillway  and the left bank tunnel spillway   can be operated at 1/5, 2/5, 3/5, 4/5 openings and full opening separately. The two low-level outlets can be operated at 1/2 and full openings respectively. The right bank low-level sediment flushing outlet is placed in the dam section 8# with its inlet being at El. 896.00m, while the left  one in the dam section 14# with its inlet  at El. 916.00m.

The water diversion system for power generation is installed inside the dam. The five penstocks are connected with the scroll cases of the turbo-generator sets from No.6 through No.2. Each one is 97.449m in length and 7.5m in diameter. The power intake is equipped with a 7.00mx11.5m bulkhead gate and a 7.00mx9.00m emergency gate, with its bottom plate at El. 945.00m. The power discharge for each is 316m3/s. 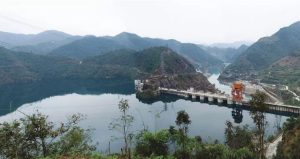 The powerhouse accommodates five 250MW turbo-generator sets. All key equipment is made in China. The rated head of the turbine is 89m. The type of the turbine is HL-231-LJ-550 and that of the generator is SF250-48/12650. The design energy output of the power station is 6,200 GWh and 7,784GWh before and after the completion of the Xiaowan Hydropower Station respectively. The total design installed capacity of the power station is 1,500MW. The first generating unit was put into commissioning in June of 1993 and the other four in June of 1995 in the first phase of the project.

Features of the Project:
An overlapping type layout scheme is adopted for the Manwan Hydropower Project, which consists of a concrete gravity dam, a powerhouse at dam toe, 220kV and 500kV substations, a plunge pool and a left bank tunnel spillway . The concrete gravity dam is connected with the powerhouse at dam toe. In order to improve the stability of the dam and the powerhouse, the powerhouse is separated from the dam on the top and jointed the dam at the bottom. A closed double-spanned slab-wall frame structure was selected for both the powerhouse and the auxiliary plant. The plunge pool protects the dam foundation and improves the high slope stability. The factors of large discharge during the flood period and the narrow river channel at the dam site were considered in the layout of the project complex.