Built on a rugged green hillside at an altitude of 3,300m, Dabao Temple is one of the earliest Tibetan Buddhist temples built in Shangri-La City.  It is destroyed in the Cultural Revolution it was rebuilt in 1984. The sacred surroundings that are the draw here, with hillsides dotted with sheep, fluttering prayer flags and pine trees. At the foot the hill there lies a 2 km-long stone wall with delicate Buddhas and scriptures carved on it.

Recommended Visiting Time: Half an Hour

Why is Ringha Dabao Monastery Special?

Built on a rugged green hillside at an altitude of 3,300m, Dabao Temple is one of the earliest Tibetan Buddhist temples built in Shangri-La City.  It is destroyed in the Cultural Revolution it was rebuilt in 1984. The sacred surroundings that are the draw here, with hillsides dotted with sheep, fluttering prayer flags and pine trees. At the foot the hill there lies a 2 km-long stone wall with delicate Buddhas and scriptures carved on it.

Where is Ringha Dabao Monastery – Location

It’s 15 kilometers away from Shangri-la county seat, and situated in the pastoral countryside of Hongpo Village.

According to the legend, a venerable Buddhist monk has taken the way to Tibet to carry out a pilgrimage with his goat in the countryside. After 3 years of the whole trip, they stayed in the valley of Ringha where the goat refused to continue the way any further more. The monk then counts that it had found there as a sacred place, and decided to build a temple right there on the hill in the middle of this marvelous valley.

Except this legend, the origin of the Ringha temple (also named as ” Temple of the 5 Wisdom Buddhas “) still remain the mysterious, it keeps an essential place in the Tibetan community that they consider there as the one of the five most important Tibetan monasteries among Yunnan.

Date back for at least 700 years; the temple was visited by the 5th Dalai Lama. While the principal buildings were destroyed during the Cultural Revolution (1966-1976), the villagers raised the funds to rebuild the principal lobby, with a simple and modest structure. Unfortunately, there are only 3 small original statues in the temple nowadays.

Several religious practices are associated with the Ringha Temple. The worshipers come here to pray to obtain a good health, heal the diseases and bless for their children. To accumulate a good karma, chickens and the other animals are taken and left in liberty. After that, the worshipers do the kora in clockwise around the hill and pray for their greetings.

There are thousands of Tibetan prayers’ flags floats in the wind around the monastery. It blows in continues on the prayers and inscribed mantras on the flags in offering to the gods, perpetuating the please by putting these flags on the hill.

While descending, you will go through a trimmed stairway of prayer wheel, with the inscriptions of the mantra “Om Mani Padme Hung” on every cylinder, invoking the attention and the blessings of Chenresig, the incarnation of compassion. The Tibetan think that every rotation of the prayer wheel tells to places them the mantra that there is inscribed. While turning these flags and wheels, the faithful ones accumulate merit, replace their negative actions by positive actions, and improve their karma for their next life. 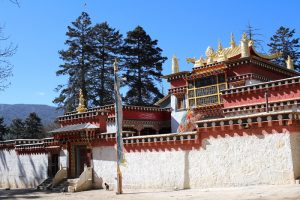 The access carries out itself by car from Shangri La (40-50 minutes). A Jeep is necessary to rejoin the Ringha Temple because the road is in poor condition; it becomes slippery when it rains. From Shangri La, it is also possible to access there by bicycle. This is a beautiful trip by going through several Tibetan towns in which you will be able to stop anywhere you want and to revitalize with a good cup of Yak butter tea!

There is also special buses to the temple during the spring fair every year. Many trekkers prefer to start their journey on the rugged footpath behind Jiangtang Hotel, and it would take 4 hours to get there.

Dukezhong Ancient Town
Just like the meaning of its name in Tibetan, the “Castle built on Stone”, Dukezong Ancient Town is built on the mountain foot. As one of the largest and best-preserved Tibetan residence groups in China, the 1300-year-old Dukezong Ancient Town, not only plays an important role in the Old Tea – Horse Road, but also serves as a corridor connecting Chinese and Tibetan language, people, religion and cultures.

Songzanlin Monastery
Songzanlin Monastery is the largest Tibetan Buddhist temple complex in Yunnan Province. It is called the Little Potala Palace. In 1993, it was listed as a Key Provincial Protection Unit of Cultural Relics by the government of Yunnan Province. It is said that the Fifth Dalai Lama decided the location though divination and gave the name—Gedansongzanlin. At its height, the monastery housed 2,000 monks. Now about 700 monks live there or around the region.

One thought on “Ringha Dabao Monastery in Shangrila, Diqing”