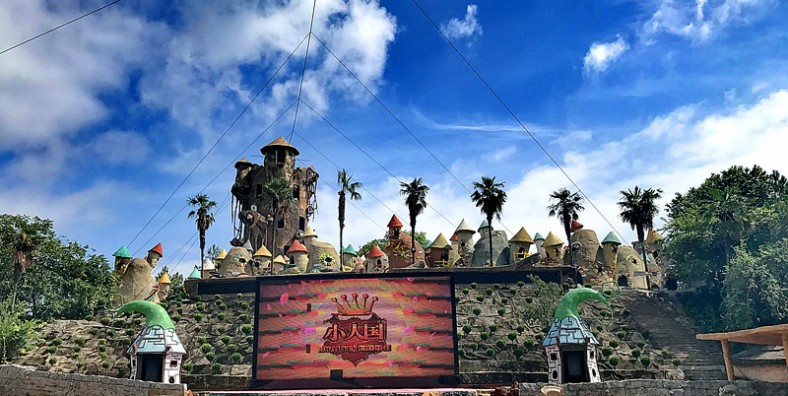 Window on China Theme Park also named The Kingdom of the Little People (Chinese: 小人国主题乐园) is a theme park located near Kunming, Yunnan that features comic performances by people with dwarfism. Supporters of the park claim that it provides employment to people who would otherwise be unable to find work, but it has been criticized for treating dwarfism as a humorous condition. 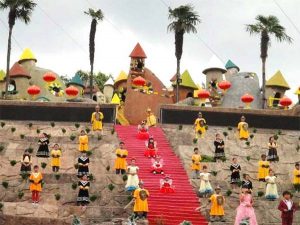 As of 2010, there were over 100 employees whose ages ranged from 19 to 48. The park requires employees to be less than 51 inches (130 cm) tall.The employees live in nearby dormitories which were specifically constructed to be accessible to short people. During the performances, the actors pretend to live in small mushroom shaped houses.

The park was founded in September 2009 by Chen Mingjing, a wealthy real estate investor, as part of a complex he owns near Dian Lake in the western suburbs of Kunming that also includes the World Butterfly Ecological Park (世界蝴蝶生态园). Although many visitors to the park are students from nearby towns, Chen hopes to make the park a destination for tourists visiting China. He provides English lessons for his employees to help them interact with foreign tourists. He aims to eventually employ 1,000 people with dwarfism.

The performers sing, dance, and perform onstage for visiting tourists.They often act out Qigong, scenes from fairy tales, or ballets such as Swan Lake.They also occasionally perform hip-hop dances. The performances often feature a “Dwarf King”. The king, who is only 1 metre (3.3 ft) tall, often wears a gold silk cape and rides a three-wheeled motorcycle during performances. 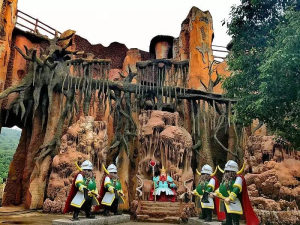 The park has been criticized by several organizations, including the Little People of America and Handicap International. Critics contend that the park resembles a human zoo and isolates the handicapped from the rest of society. Chen claims that the business provides employment for many who would otherwise be unemployed, allowing them to build self-respect. Many employees have said that they enjoy living with other short people and feel less lonely at the park. They say that before they were employed by Chen they were unable to find work or were exploited by employers. The American television channel, Vice, started partly by director Spike Jonze, filmed a piece for their show, Vice Essentials, at the Kingdom of the Little People in 2015. In their short documentary they interviewed some of the staff and were taken on a tour of the park, including the dorms and behind the scenes places that visitors aren’t normally privy to.

Other Information about the Kingdom of the Little People

The Lollipop Guild and the rest of Munchkin Land. Snow White’s seven caretakers. Willy Wonka’s Oompa-Loompas. All have two things in common: little people (colloquially, “dwarves”) and utter fiction. But dwarfism exists, and people with dwarfism need jobs. Combine that with a serious problem of discrimination against little people, and you could have a problem on your hands. For China, the controversial solution is the “Kingdom of the Little People.”

Located near the city of Kunming, the capital of the Chinese province of Yunnan, the Kingdom of the Little People is intended to be a tourist attraction — a theme park, of sorts, where everyone (except the visitors) is short. In order to work at the Kingdom, one must be no taller than 4’3″ tall, eliminating some of the ‘taller” people with dwarfism. As of early 2010, the park employed 100 such people and its owner aims to employ 1,000 total, according to Reuters.  Those people hired by the Kingdom are offered housing in a dormitory-like environment customized for people of their short stature, and most are given a role as a performer inside the Kingdom. 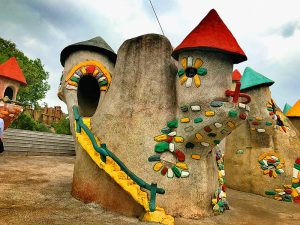 Tourists pay a hefty sum for the honor of visiting — tickets cost about $10 (in yuan equivalent), an enormous amount given that per capita GDP in China is only about $5,000. The show they receive? The performers pretend to live in mushroom-like huts and act as if they’re members of a fiefdom lost in a Vaudevillian nightmare. Performers of short stature don tutus and put on a tongue-in-cheek version of Swan Lake. “Shaolin monks” put on a faux combat performance. A contingent of guardsmen march around the grounds, acting (as part of the motif) while doubling as crowd control. And ruling this whole kingdom — at least, in the context of the show — is a 3’3″ emperor, draped in a gold tunic and protected by bodyguards, as seen above.

From Kunming South Station to the Kingdom of the Little People

From Changshui International Airport to the Kingdom of the Little People

From Xianximen Station to the Kingdom of the Little People

Take bus No. 33 to Xihua Street to get off at the exit of Gaohai Expressway, and then take a van to go back to Kunming, waiting for a Medium Bus on the auxiliary road. The fare is 8 yuan.

Tips: You can go to the Liangjiahe Depot where there is a direct bus to the Kingdom of the Little People.

Touring with us will make your time well-spent well spent and your trip in the Kingdom of the Little People in Kunming with a unique experience. Join us in the following tours:

2 thoughts on “Window on China Theme Park in Kunming”